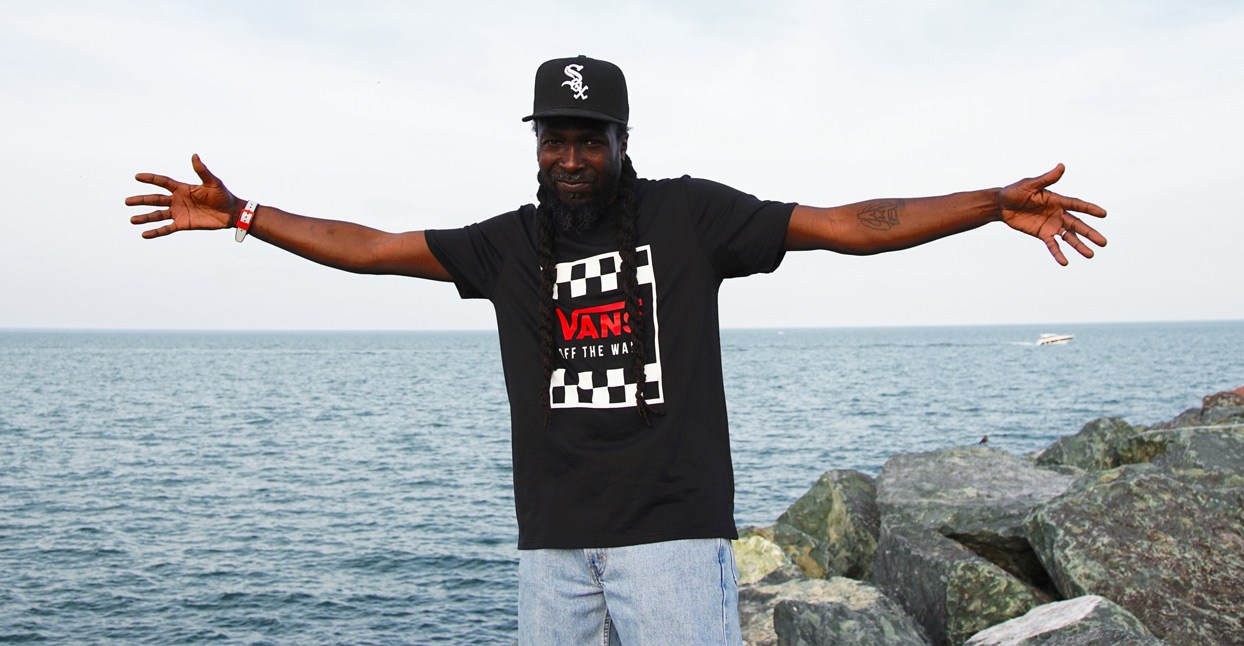 Photos by Will Glasspiegel

Personal markers are dotted like a trail of breadcrumbs through RP Boo’s music. Some of them are more visible, like the well-known samples—such as First Choice’s “Let No Man Put Asunder”—which he’s used repeatedly through his 20-year-plus career. In other cases, they require closer attention. His lyrics could point toward a song cherished by a family member. A lifted vocal, in another instance, might nod to a track which carries significance in footwork circles. It’s music that rewards close attention, but doesn’t necessarily require it.

His new album I’ll Tell You What! is his third full-length, and the first to contain new rather than archival material. One of the founders of footwork, his career—along with that of his peers, like DJ Spinn, DJ Manny, and the late DJ Rashad—took a turn when the music, previously contained within the enclaves of young, black Chicago, started to gain widespread exposure around 2010. He sees his new music as continuous with what he’s always done, but altered by new contexts.

RP Boo sees footwork as having a diminished role in Chicago these days. He cites feuds in the music’s home city, saying that he sees other outposts—in particular, Japan, where both the music and the dance have been picked up by an enthusiastic group of supporters—to be the culture’s future. For many, footwork is inseparable from the distinct dance style with which it evolved. But for Boo, he says that touring elsewhere has shifted his view: “It was never about being strictly for a certain dance type. It’s about how the people feel.”

Footwork, often noted as starting in Chicago’s south and west suburbs, can be traced back further, to the city’s west side in the mid ‘80s, where dance groups would set routines to house music—most notably, the House-O-Matics, whose performances helped to kickstart a wave which led to thousands of young dancers taking part across the city. This would take place at the roller rink on the city’s South Side, and at the annual Bud Billiken parade. Later, the culture splintered off into smaller cliques. Dancers would face off at underground gatherings, known as the battlegrounds, which in turn spurred on the evolution of the music.

We also spoke to Wills Glasspiegel, a photographer, filmmaker, and writer, who’s currently writing a PhD on footwork at Yale, and a friend and collaborator of Boo’s. It’s his lyrics and the way Boo uses samples, Glasspiegel argues, that’s central to understanding his significance. Comparing him to artists like Rammellzee and Sun Ra, he says, “I wouldn’t wanna ghetto-ize RP Boo to being an outsider artist. But this is a guy who’s created an immensely meaningful system of symbols and signs and ways of expressing them.”

Boo’s style has always sounded rawer than a lot of his peers—and often, more unabashedly weird. On I’ll Tell You What!, there are minimal yet weighty rhythm tracks, like album closer “Work The Flow” (which is a response to the Teklife track “Super High”). Drums, bass, and Boo’s voice work together on the track as spare components, lending a DIY feel as things ratchet up to a body-jacking conclusion. There’s also the collage-like “Deep Sole,” a tribute to DJ Rashad. It echoes the lush sound Rashad was known for, as well as his knack for flipping evocative, ear-pricking source material.

Boo made the new album on a computer with Ableton, rather than the AKAI sampler and Roland R-70 drum machine which were previously his mainstays. This means his sparse palette is now sometimes fleshed out with synths and plugins, adding soft edges of texture and warmth. His underlying slant on footwork remains unchecked, though, proffering the same kinetic rhythms lined with personal detail. On “At War,” the repeated refrain “Keep the home fire burning” is a reference to footwork battles, but is also a direct nod to a Latimore song often played by his grandmother.

The way Boo uses samples is often loaded with meaning too. On “No Body,” he returns to Class Action’s “Weekend,” an iconic early ‘80s New York record that he’s lifted from many times previously. He says that he looks to say something different with a sample each time he uses it—in this case, literally, using a snippet of its spoken section to stitch together a dialogue with its main sample. “It’s like when you receive knowledge, especially with a book dealing with spirituality,” he explains. “It’ll say certain things, but as you progress in life, you could go back and read the same scripture but it will say something totally different as you grow.”

Glasspiegel is keen to emphasize the bigger picture underpinning what Boo does. He says that discussions of footwork often neglect to discuss the dance culture which it grew in tandem with, arguing that the dance—and the impact it had on young black communities in Chicago—is just as important as the music. He’s involved in promoting footwork in Chicago and is trying to continue to offer it as an outlet for young people in the city. “It’s not what it was,” he concedes to Boo’s observation that things have changed. “It’s not an all-city underground black youth dance. It’s not that right now. But that doesn’t mean it can’t happen again. And it doesn’t mean that it’s not doing all kinds of amazing stuff that’s related to that.”

That’s not to say Boo doesn’t pay tribute to Chicago’s influence. He’s quick to acknowledge the importance of where he’s come from, and the clues he leaves toward the city’s touchstones—in terms of both his peers and antecedents—are one of the essential ingredients of his music. But there’s also something instinctive in the picture he paints of himself. Outlining his stance on the creative process, he says, “Just have love for what it is that you do. Never plan how it’s gonna happen. But when it does happen, it’s without notice, but you have to catch on to understand, ‘Hey, how was I able to do that?’ Then you will be able to say, ‘Well, I did put in a lot of work!’” He smiles. “And it does manifest.”