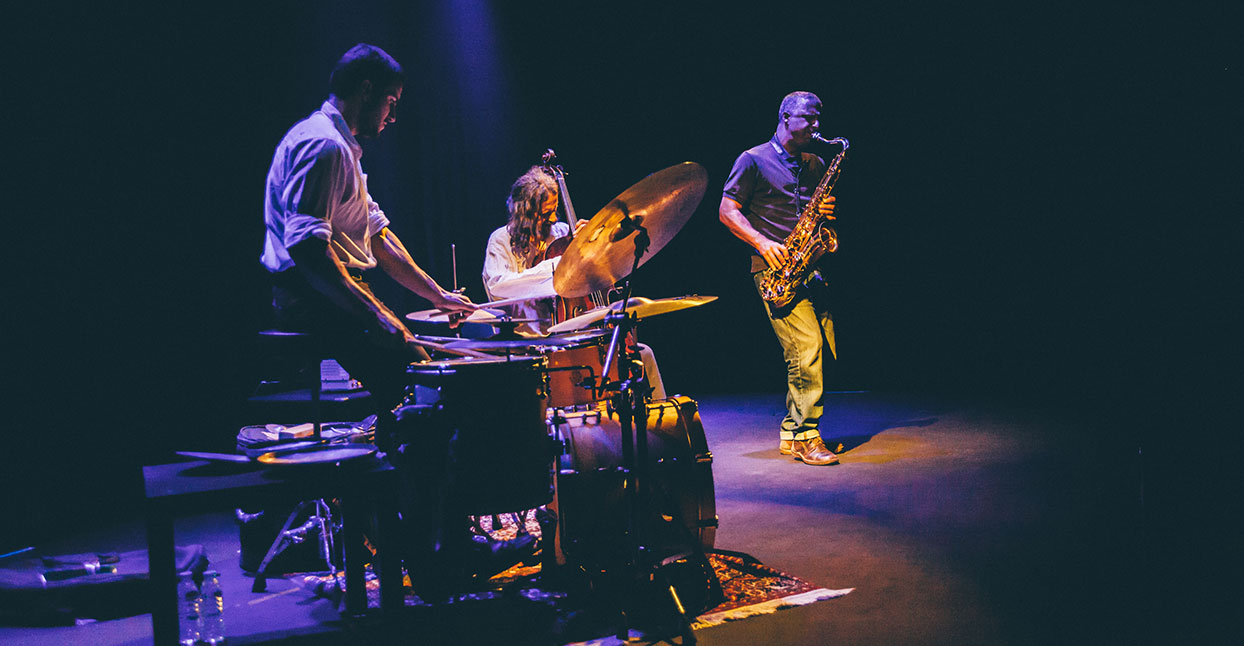 Portuguese saxophonist Rodrigo Amado records and performs in a wide variety of contexts, but his longest-running group is Motion Trio, with cellist Miguel Mira and drummer Gabriel Ferrandini. Their music combines the languages of free jazz and European improv; they can swagger like a traditional saxophone trio, or simply be three men in a subtle and constantly-evolving musical conversation. Mira’s use of cello instead of bass, and Ferrandini’s skittering exploration of the drum kit (recalling Tony Oxley’s work with Cecil Taylor), are matched by Amado’s muscular but introspective phrases.

They frequently collaborate with fellow avant-gardists: In 2012, they recorded a studio disc, The Flame Alphabet, and a live one, Burning Live at Jazz Ao Centro, with trombonist Jeb Bishop (Vandermark 5, Flying Luttenbachers). In 2014, they made The Freedom Principle and Live in Lisbon with trumpeter Peter Evans (Mostly Other People Do The Killing). Their latest album, Desire & Freedom, is the first since their 2009 debut to feature just the three core musicians. Its three improvised tracks range from 15 to 20 minutes in length, but always convey a clear sense of purpose. The first, “Freedom is a Two-Edged Sword,” takes its title from an essay by rocket scientist and occult weirdo Jack Parsons, which reads in part, “Freedom is a two-edged sword of which one edge is liberty and the other responsibility, on which both edges are exceedingly sharp.”

Amado spoke to us by phone from his home in Lisbon.

This is only the second Motion Trio album that’s just the trio. Why no guests this time?

Well, we wanted to touch base again with what we are as a trio. We were feeling like every time we would collaborate with a fourth musician, something important would change in our music. Because we were rehearsing every day and playing like crazy—we all live here in the center of Lisbon and are working a lot together—we felt, ‘Hey, maybe it’s the time to record in trio again.’ Because we’re doing such different music from what we were doing in the beginning, it’s important to make a document. That’s important for us, important for people that follow Motion Trio, and interesting in itself, I think.

How do you think the trio’s language has changed over time?

It has changed enormously, in two very different ways. First, as individual players, the development I had and the development Gabriel and Miguel had, it’s huge, but it’s normal. We’ve been playing together almost every day, and we’ve been connecting with such powerful musicians, that it’s normal that our individual playing changes a lot. At the same time, as a trio, there’s this intensity of working. We went into the studio for two days, so we had a lot of material, and the process was really, really time-consuming and intense. We would sit and listen to the recordings over and over again—everything that we recorded. Then, we started giving our own evaluations for each song. We started sorting out what we would put on the record. Then, after it was sorted out, we began the process of mixing, balancing the three instruments. It was crazy. I can tell you, we spent maybe 200 hours doing this. At the same time, it was the fastest production of a record we did. We recorded in February and put it out in November. And all this really had an effect on the trio, because we feel that we’re communicating on a much deeper level, where the speed of communication is much faster.

The pieces feel very free—how much actual composition is involved, or is it 100 percent improvisation?

All my projects are 100 percent improvised. We don’t even talk about, ‘Let’s start with a calm thing and go from there,’ or, ‘Let’s start very fast.’ We don’t talk about it, period. We talk about the music after we’ve played it—we analyze, if it was good in some way or bad, or if we were feeling lost—but we never talk about anything that we’re going to play. The only thing I might do is, like, decide who starts a song.

Why does Miguel play cello instead of bass? He plucks the strings as much as a bassist, so is it just that slight difference in tone that you’re after?

It’s more of a physical thing. He’s a really big, tall guy, so the double bass could be an ideal instrument for him, but I think he has this physical thing with the cello. Also, he loves the connection with contemporary classical music and the European school of improvised music, and I feel he can get closer to that with a cello than with a bass. With the bass, he would be closer to jazz than he is with a cello. With a cello, he can be more abstract, at least as I see it. Miguel doesn’t use regular tuning on the cello. He tunes in fourths, which is similar to a bass. So he’s in a middle ground between the cello and the bass, and he’s doing his thing. He just started to try another different tuning—he just lowered the whole cello a half tone. He’s happy with it for now, and the music is happening, so we’ll see.

What does Gabriel offer you, as a drummer?

Well, Gabriel is a whole case in itself, you know? He’s really young, he just turned 30, but we started playing together when he was 22 or 23. And as a person, he’s very, very mature. I am always learning a lot from him, not only musically but also life-related stuff. Things that he researches, crazy stuff. To be around a person like that is really inspiring. At the same time, his playing is like no one else’s playing. It’s really different from every other drummer I’ve played with—he’s always trying to eliminate every kind of cliché, every kind of already explored energy. Even if we’re dealing with thematic stuff, we’re always trying to get rid of the clichéd elements. We’re looking for different solutions, different things, new things.

Where did you find the Jack Parsons essay that gives the first track, “Freedom Is A Two-Edged Sword,” its name?

Well, Gabriel came to us all excited about an interview he saw with Bill Evans. [Evans] was asked to define his music, and he mentioned three factors, which were desire, freedom, and responsibility. This was the first time that I had heard the word ‘responsibility’ associated with freedom, and it rang so powerfully in my head. Also, ‘desire’ made special sense for me and the three of us—we felt it had a lot to do with our own process, because this crazy thing that we’re doing, playing every day, hours in the rehearsal studio, and doing it with such pleasure—it has everything to do with desire. To be able to do music that’s really free, to translate freedom with music, you have to have this desire. You can’t fake it, or decide you’re going to do it just because.

Gabriel also—he’s always reading stuff, I don’t know where he gets the time—came to us with this Jack Parsons essay. And when he started reading the stuff from the book, I totally identified with the things he was saying. Not only about music, but about life, about sex, about religion. He was making the bridge to this concept that we took from Bill Evans’ interview. When Gabriel read the phrase that we used on the record, I realized it would be perfect.

The discipline and freedom you talk about, I feel like other musicians have taken similar approaches. Sun Ra had all his band members living together with him, and Cecil Taylor used to rehearse bands for hours.

Yeah, yeah. In the case of Cecil Taylor, for instance, the work he did with his bands with Jimmy Lyons, it’s similar to ours. In the case of Sun Ra, I would say he was more looking for the personal connections, the human connections, and he believed they would translate into the music. Because Sun Ra could be really chaotic when it came to playing—he wasn’t looking for the same kind of clarity that we’re talking about when we talk about Cecil Taylor and his quartet. But definitely, if you want to reach new levels with free improvisation, you have to be working, working, working, because the [transition] only happens with work, you know? And then you get to a higher plane, and you keep working, and you get to another higher plane, and you can go forever; the only limit is your life, because your life is limited.