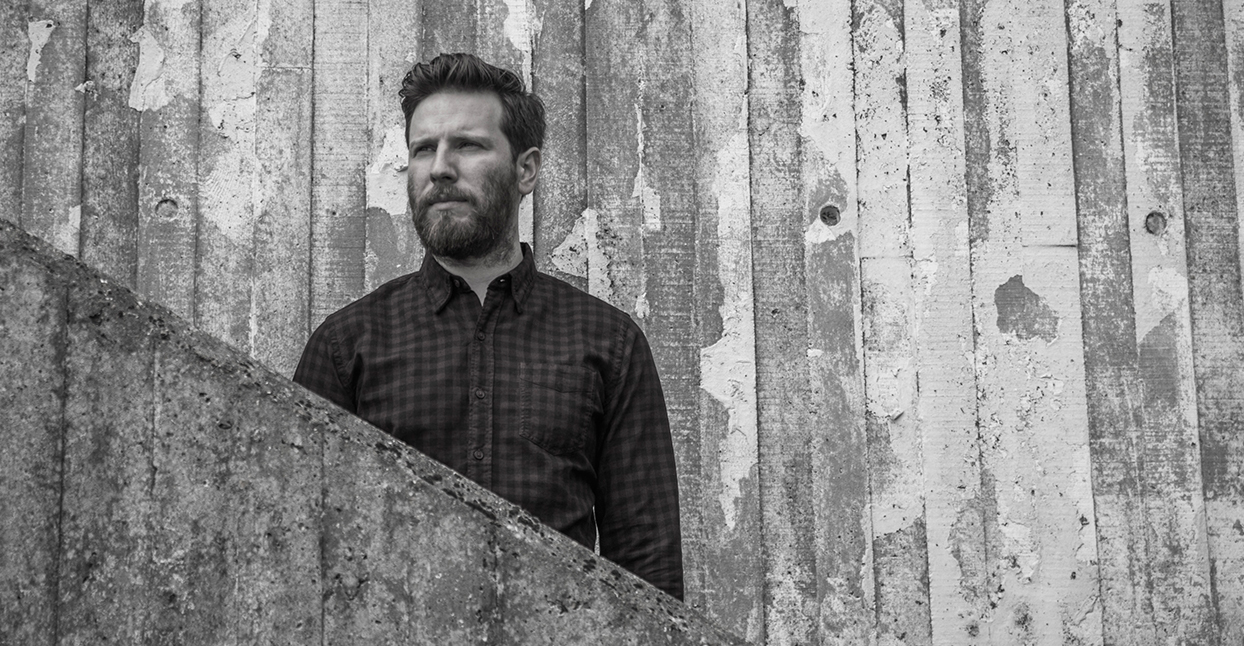 “Most of my music has a big accident in it that I really like. I like risk.”

Ryan West likes chaos. To a certain extent, anyway. The producer, better known as Rival Consoles, clutches a cup of tea as he says this, looking at home in a bucolic Southeast London coffee shop. He’s just emerged from his studio down the street, a room filled with tangles of chords and gear that he jokes makes it look more like a deranged musical refugee center than a workspace.

West has been making music since 2007, at least in an official capacity. Then known as Aparatec, he was the first artist signed to Erased Tapes, which would go on to release albums by Kiasmos, Nils Frahm, and Ólafur Arnalds. Rival Consoles’ new mini album Night Melody (his fourth full release to date) underscores the label’s genre-gobbling ethos. Its six tracks unspool with an unhurried grace, gracefully skirting the lines between club and ambient music. From the slow-building title track, with its skittering dance beats and delicate synth passages, to the rat-a-tat rhythms of “Johannesburg,” Night Melody makes devlishly complex music sound remarkably simple.

You released Howl late last year and you’re already back with new music. I take being prolific isn’t an issue for you.

I’m not trying to make lots of work. I’m just in a period where I have lots of ideas that come out naturally. I want it to be a natural process. I’m just more in tune with what I want and how I work as an artist, after all these years of chaos.

What was the turning point?

The record Odyssey. That’s when I first started to allow myself to do what I really want and not worry too much about what the music is referencing. Obviously, when you make any kind of art, you’re aware of thousands of references in things that you do. I’m still aware of that, but I no longer care. It took me a long time to understand how to use the musical vocabulary I’m using. Other people probably come by this more easily.

I don’t know. I think whatever your creative field is, it’s pretty traditional to have a process of maturation.

Yeah. I feel like I understand the possibilities. They’re very simple things. I think it’s more about my music doing something that other music isn’t doing for me. I can see gaps where there’s things not being done. I’m talking about very subtle things, obviously. Little things excite me, and then I try to explore them more. They seem to be really simple and overlooked at the same time. It takes a confidence.

Can you give me an example of this?

In “Howl” there’s a moment where the dissonant chord pulls apart the harmony. That’s obviously a thing that’s been done before. But it seems like it’s not done enough in music. Little, simple things like that. Tuning, making things bleed out of tune and bleed into tune. These little moments are what I’m interested in. I like an emotive sense of narrative in electronic music, which I feel like most people stray away from.

When you were generating so much material, was there a track or a moment that led the way for you with this release?

This album happened really naturally without me over-thinking the layout. The weird thing is, everything flows in order. Which has never happened for me before. I think it’s because they’re all in keys that reflect each other. So there’s a lot of compatibility, but without me thinking about it. Everything came about in a really natural way. It feels natural, but a clever deviation from being too natural. I’m interested in tension in music. Every single synth I use is slightly out of tune.

Do you let it happen, or are things like tuning shifts intentional?

Sometimes it’s naturally out of tune. Other times, I’m going out of my way to make them slightly conflict with each other. If you want it to be more painterly, then you need to include these kinds of things, I think. Then, it’s about what you do with it. I use lots of distortion, so everything becomes less clean. Once you’ve got a piece of music, you might have 100 instances of [instruments going out of tune]. It makes it less plastic. Lots of tiny layers.

Do you give in to chance?

Yeah! I’m very intuitive. But I’m aware of what’s going on. There’s loads of accidents all the time. Most of my music has a big accident in it, which I really like. I like risk. I like chaos as well. I record lots of things very quickly, and they might be awful. But there might be five seconds in there that work, and that I can rerecord later. It’s like globs of color. I only use a few things now to make music.

Do you find that helps, having a limited set of tools?

Yeah. Even if I was in a well-stocked studio, I’d just hone in on one thing for a while. I wouldn’t start running around. I become fixated and obsessed if something functions well for me. I’ll spend eight hours with that. Even with just one sound. So I can easily block everything out.

Is there a track on Night Melody that really stood out for you?

The second track “Johannesburg,” I’m really proud of. Especially live, because it’s so dramatic. Dramatic music can be really sickly, but I think this is dramatic in a way that’s really honest.

Yeah, we did four shows. That was crazy. We were traveling for two weeks with 10 men in a van, if you can imagine that! It was amazing. I’ve never met these people before who we went on tour with, but luckily we got on. Obviously, most people in the music industry who are operating on a certain level bypass so many places in the world. They do the same travel pattern. There are certain circuits established that no one agrees with, but they just get sucked into them. That’s why [an opportunity like] this is amazing. The music is amazing that’s going on down there.

There’s a few hardcore fans that couldn’t believe we were playing there. It was really good. Especially Johannesburg. There’s a really good scene there that not a lot of the world gets to witness because of the standard listening gatekeepers. I’m sure as time goes on, things will become a bit more integrated.

When you listen to this track, can you hear some of the emotion and inspiration from the trip?

Yeah, definitely. I probably wrote half of it before I started touring. I think it was just the energy from being on tour in those places that made me want to finish the track and lift the end. The end is so lifted! It’s a really colorful piece of music. I like color in music. Sensation.

Do you associate music with color?

I haven’t got synaesthesia. I just mean, for example, music that’s not electronic—different types of jazz, are so colorful to me. Each tone seems very vibrant in color. Electronic music still has lots of color, but I don’t like the colors that often. So I’m trying to include colors I like, and it’s so hard.

What colors would you associate with Night Melody?

Loads of reds and yellows and greens. Vibrant. Even though it’s a nighttime listen, there’s lots of light in there as well. It’s quite moody and there’s a darkness to it, but I tried and include the sensation of light.

When you say this is a nighttime listen, is there an ideal circumstance for listening?

Any kind of evening scenario. It was made at night. That’s why it’s called that. It was dark at four o’clock every day in the winter. Even if I was making something in the morning, it felt like the light was over very quickly. And it was stressing me out! That’s the whole meaning behind the title. Winter is brutal. You feel like you’re trapped in a tunnel. Even if you get up really early it’s always on your mind that it’s going to be dark very soon.