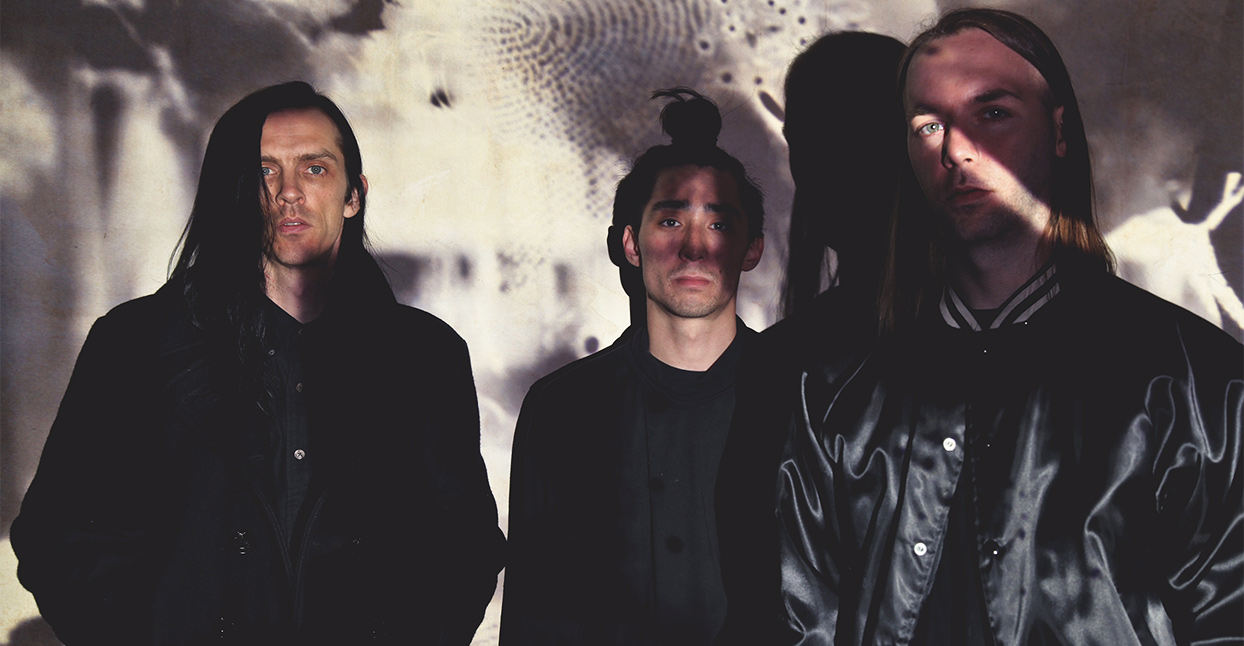 In the absence of light, the world takes on an achromatic pallor. Colors are muted, if not sucked away entirely; shadows form, obscuring dark corners and creating mystery. This is the world that Ritual Howls inhabit; darkness and gloom hang heavy over street corners and empty train stations, and there are secrets in the omnipresent fog.

Hailing from Detroit, Ritual Howls are guitarist Paul Bancell, bassist Ben Saginaw, and electronics/synth player Chris Samuels. Though the contemporary (and thriving) goth/post-punk/industrial scene has embraced them, their impulses skew away from strict generic conventions. All three members of the group come from varied musical backgrounds that include noise, industrial music, psych-rock, country, and hard rock, which gives their music an eclectic edge.

Their most recent offering, Into the Water, represents an even more accomplished vision than their previous three (very good) releases; they’ve been working together now for enough time that they have a clear vision of what they can and want to accomplish. The electronic rhythms on Into the Water are cold and driving, with a persistent bass throb pushing the songs forward. Layers of synths are a rainy wash against minimalist, reverb-heavy guitar lines. Winding throughout are moody vocals, and an abstract—but not inconsistent—narrative.

We talked with Ritual Howls about their environmental, cinematic, and collaborative approach to songwriting, resisting labels while embracing community, and more.

What are some of the inspirations for the Ritual Howls sound?

Samuels: Definitely cinema; that’s one of our inspirations, in terms of morphing sound around the narrative of Paul’s lyrics. Cinema, the long-form idea of creating peaks and valleys with sound, so it’s not just verse-chorus-verse. The album is like a movement of a film score.

Saginaw: I started playing bass because I loved the bass lines [of] the Birthday Party, but the bass lines that I tried to play quickly changed with what the band was doing. In Ritual Howls, there’s more of a driving bass than a wonky Birthday Party vibe. Like Chris said, we’ve always loved creating an environmental experience with the music. More recently, I’ve been listening to a lot more house and techno, and that has seeped into how I’ve been trying to make my bass lines.  In regards to general influences, right around the time when the band started, Paul gave me an Einstürzende Neubauten tape and said he wanted it to sound like [that]. Even though Paul and I didn’t have the deepest industrial roots, we still wanted the band to have this rigidity that a lot of strictly organic music didn’t have.

Is the songwriting process collaborative?

Saginaw: One member will bring in something that they were working on, and it will flesh out from there.

Bancell: It’s definitely a collective. Initially, the individual would drive the structure of the songwriting, but now we have really found a formula for how we move from jamming together to an actual song; the song structures emerge organically. I’m influenced a lot by film. I work at an art house film theater, [and I like] the imagery of Bergman and Tarkovsky films, doom and gloom. I was talking with a co-worker today, and we both agreed that depressing films are the best. The dark and tragic, the struggle with our demons, that’s what interests me lyrically and visually. I tend to contribute that to the project.

Are the lyrics personal, or are they more esoteric?

Bancell: I would say the lyrics are a stream-of-conscious commentary on what I see around me. I try to pick words that will create a vibe or create a picture, a movie that goes on in your head. For example, the song “Final Service” on Turkish Leather—I had this movie going on in my brain one day, and I wrote down lyrics describing the scenes, trying to describe the film in my brain. But the lyrics are also personal, describing things that I observe.

I’ve seen Ritual Howls tagged with the “goth” or “post-punk” labels. Does that make any sense to you? With all of the cross-pollination in music, do these labels actually make an impact on how people perceive the music?

Samuels: I personally don’t like the goth label. It’s kind of like when people said ‘alternative music’ in the ’90s. It’s so generalized. We like good, old-school goth music but we’re not trying to pass the goth torch. The community is awesome. Whoever wants to call us whatever is fine, but we never try to go down the label path.

Saginaw: I can see the logic behind using those labels, because there are definitely pieces of those influences in a lot of what we do. But we don’t specifically identify with [them]. It doesn’t have a lot of weight on what we are trying to create.

Was the production of Into the Water any different from the other records?

Samuels: We worked very closely with Adam Cox, the engineer. We recorded everything as if we were sitting in our bedroom writing these songs, and fine-tuned as we went along. I think that extra time resulted in a different outcome; not necessarily better or worse, but different. I work a lot with MIDI, so on this record we utilized it more. I was actually printing MIDI on the computer from the drum machines and synths, and then going back through on the digital audio workstation [where I] organized [those] MIDI notes as opposed to just recording the analog outputs from the drum machine or synths; there was more fine-tuning of the electronic sounds.

What are some of your favorite tracks on Into the Water?

Samuels: “Going Upstate,” which is not on the vinyl but is on the digital version. We made a video for it.

Saginaw: I really like “Park Around the Corner.” I tried to diversify the bass sound a little bit more than I did on Turkish Leather. It wasn’t as straightforward and driving; it involved a more complex pattern of notes.  I also love “Bound by Light,” because of this one line that Paul has where he says, “With us side by side, together we start bleeding/ tagged and tied and tied, together we stop breathing.” When I heard that, I thought it was the heaviest shit ever! I love “Going Upstate” as well. As far as songs I like to play live, I think “Park Around the Corner” and “Bound by Light.”

Bancell: I agree with the guys: “Park Around the Corner” and “Going Upstate.” Also “Scatter the Scars” was a pretty fun one, because it has a sound that is pretty unique for the record. Sonically, it’s new; there is really nothing on our previous two albums that sounds like it.

You guys have great-looking videos. Who produces them?

Samuels: We basically do it ourselves. Everything we’ve ever done, we’ve done ourselves. We would love for someone else to do it, but you have to pay people and we don’t have a lot of money. If someone offers, we would love to do it, as long as it fits aesthetically with what we’re doing. We’re visual artists as well, so it’s not a stretch. We all make films, we make sculptural stuff, we make paintings. The music is like this weird little byproduct of what we normally do in our day. During the day, we’re over here making physical things, and at night we make Ritual Howls stuff. If we want a video or any visuals, we do it ourselves.

Saginaw: We’ve had people get in touch about making a video, but we never heard from them again. People can be pretty flaky. We just haven’t found the right person who is not in the band to make the videos. Sometimes when you’re too attached and you’re part of the project, it’s hard to look back at it without your emotions affecting it; sometimes it’s nice to have someone outside of it to do that.

Detroit seems to have an active scene. Is there a lot of support for Ritual Howls?

Bancell: Yeah, we just did a record release show last week. Ben really set up an amazing lineup of DJs and other people to be a part of the show.  We’ve gotten to know a lot of people who have given a lot of support to the band.