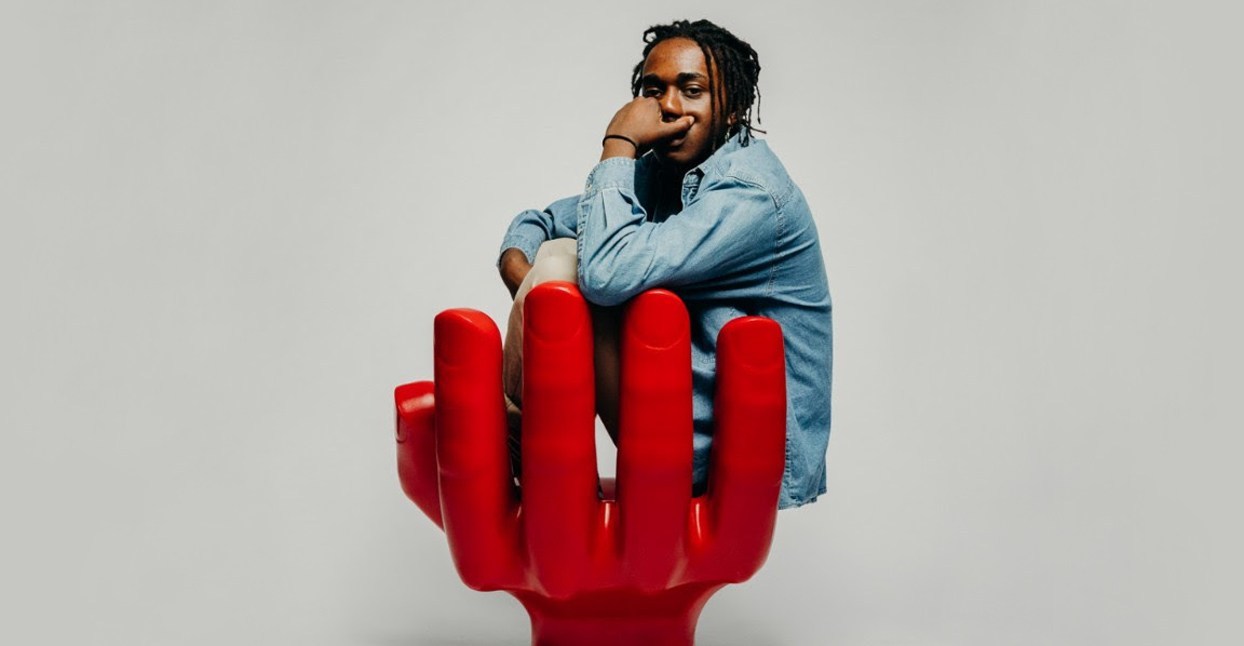 On the cover of his third EP, BANBA, rising Chicago rapper Ric Wilson resembles a young Jean-Michel Basquiat. Wilson’s hair is swept up, and he’s sitting in front of two expressionist portraits as if he painted them himself.

This isn’t a coincidence: Tamra Davis’s 2010 documentary about the artist, The Radiant Child, shows old footage of Basquiat bitterly recalling how white critics trivialized his graffiti background and abstract renditions of Black American history, calling his work “primitive.” When Wilson watched The Radiant Child for the first time recently, he realized that he would never want other black artists—like himself—to feel so dismissed.

Like lyricists Chance the Rapper and Noname before him, Wilson found his voice when he participated in Young Chicago Authors, the nonprofit organization that runs youth poetry slam Louder Than a Bomb. Wilson is an outspoken community activist: At age 19, he worked with another organization, We Charge Genocide, to present its shadow report “Police Violence Against Chicago’s Youth of Color” to the United Nations. At shows, Wilson orchestrates Soul Train-inspired line dances with the crowds, and he remains inspired by Soul Train‘s history—how host and show creator Don Cornelius’s attempt at creating “a black American Bandstand” fostered inclusivity among marginalized communities. “What I’ll get a lot of the time is a just a bunch of white people moshing,” Wilson says of the scene at his live performances. “That is wack. I wanted to find a way for everyone to dance.”

Wilson pushed himself with BANBA to become a different sort of bandleader. While friends like fellow Chicago rapper Kweku Collins contributed verses, Wilson worked with producers like the North Carolina-based Hirsh, over email, to construct each song bit by bit, week by week, one delicate piano or swelling horn melody at a time. “Don’t Rush” aside, the resulting instrumentals are more relaxed soul than what Wilson has released in the past. On “Split,” he raps about being a work in progress, still trying to figure out right from wrong and being at peace with that: “Before I finish my problems, I will finish this song.” Its whirring production recalls gears in motion, if not a toy factory come alive.

And while BANBA does have one throwback dance track, “Don’t Rush,” the song isn’t simply about inspiring people to move to the rhythm. On the second verse, Wilson wishes that he was included in an imagined “Top 10 who gon’ blow from Chicago” listicle. But he reminds himself to be patient—that recognition will come in due time. “You compare yourself to other people; so many people in Chicago compare themselves to other people,” Wilson says. “But everyone is on their own path and journey and shit. I’d rather be like Childish Gambino, where as I grow and get older, all my releases get better.”

What Wilson does have figured out is a motto to call his own. His EP title is an acronym for “black art, not bad art,” a sentiment inspired by Basquiat, with phrasing inspired by progressive jazz outfit and new label mates at Innovative Leisure, BADBADNOTGOOD. Wilson’s definition of “good” or “bad” art is beside the point. He wants listeners to reconsider how critical notions of “bad” art might have been too constricting for Basquiat to truly thrive—and how they still might be for artists like himself, Noname, and Lil Wayne, who he shouts out in the title track.

Elsewhere, BANBA’s disses are mostly reserved for those who expect Wilson’s music to sound aggrieved, especially now that he has winning “Basquiat energy,” to quote his title track. “When you’re a Black musician, I feel like people always want one emotion from you,” Wilson says. “My whole thing is, I can have all different types of emotions in one song if I really want to. ‘Black art, not mad art / Black art, not sad art.’ That’s what I was trying to say. Fortunately, it rhymes and it sounds really cool.”