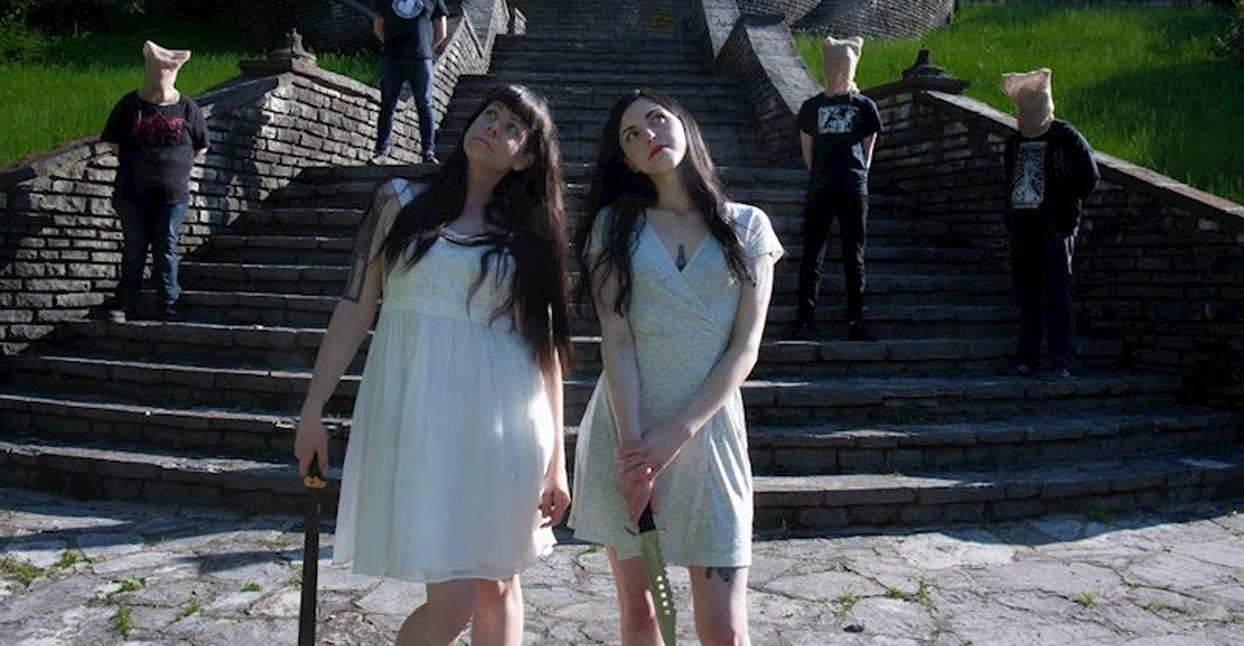 Following the shooting of 18-year-old black man Michael Brown at the hands of white police officer Darren Wilson, in August 2014, the world’s eyes became glued to the St. Louis suburb of Ferguson, Missouri. Over the next year, the residents of Ferguson and the area’s activist community played an essential role in bringing vital conversations about the institutionalized racism, classism, and police brutality plaguing America today into the national spotlight as the country headed into the 2016 presidential election.

In 2017, a group of St. Louis activists came together to further that reckoning, by way of a crusty, punk/metal hybrid six-piece called Redbait, so named for a well-known anti-Communist slur. “We’re all trained organizers—half the band is union—and a lot of us were there for Ferguson,” says Madeline B., one of the band’s two frontwomen. “Some of us were demonstrators, some of us arrested, some of us were fuckin’ pepper sprayed by cops. We were really in the thick of it for the long haul. All of our politics kind of cumulated into Redbait.”

Punk bands rising up from activist scenes is nothing new, but Redbait may be one of a handful who can trace their foundation to a specific protest gathering. “We were doing a fundraiser show, and we had to change venues of the last minute because of political reasons. We didn’t have an opener so we were just like, ‘Well, you know some Misfits songs and you know some Black Flag,’ and we just threw together a covers set,” says co-frontwoman Rebecca Redbait. The chemistry between the performers proved to be natural, and the response from the audience inspired them to start galvanize their anti-facist, anti-racist, anti-patriarchal, and pro-worker’s rights ideologies into sonic diatribes of their own.

Redbait’s values don’t just inform their music: they dictate how the six-piece function as a unit, both amongst themselves and in the public eye. “We really try to make sure everyone is represented and their viewpoint, whether it’s music or lyrics,” Rebecca says. “I think there is also an intentionality around not censoring the women in the band, just because in the scene at large there’s just the white male perspective is pretty well represented already—so for example, a lot of the guys will take a backseat in interviews.”

On their self-titled debut EP, Red Tape, Redbait explore themes of domestic violence, sexual harassment, and police brutality toward people of color. The strength of the EP’s four tracks drew the attention of New Age Records, who released the group’s blistering second EP, Cages, last month. “I don’t want to say we’ve matured [since Red Tape], but we’ve definitely honed our sound,” Madeline says. “The first EP was a less cohesive smushing of each other’s influences, and with Cages we had more of a conceptual plan of what we wanted to put into a record… I think it was a more serious process.”

To that end, Cages find Redbait giving a wider cross-section of takes than ever before; the anti-sexist, anti-racist fury of their last LP is tempered with songs about animal rights, economics, and drug addiction. As always, they never shy from calling out institutions and authority figures that perpetuate suffering and injustice. The raging, crusty “Bred for the Knife” addresses the horrors of factory farming, while the title track—a chugging, metallic protest against the Trump administration border policies that have torn families apart—Madeline screams, “Scapegoated by the public / Uprooted by the state by politicians and corporations who make America great.”

Elsewhere, Redbait draw from personal experiences and observations from life in St. Louis, in order to highlight the social and political constructs plaguing urban life in America. The ripping “Our Town” details the segregation and prejudice play out in the band’s own backyard from the perspective of a stereotypical racist (“Don’t go north of Delmar if you want to stay alive / Lies sit outside on the south side / And you’ll be burglarized”). Take out the various references to St. Louis landmarks, and the searing satire could easily describe any city in the country. And that’s exactly why the band made it.

“With Ferguson, the entire country got this idea of St. Louis as violent people are looting,” Rebecca says. “And I think ‘Our Town’ really illustrates how structural racism is really at play here, and just to kind of give people a real perspective from people that live here, and presents more of the actual truth, as opposed to the one that’s blown out of proportion by the media.”

The logistics of handling a six-person band (mostly work, family, and activism obligations) have largely kept Redbait close to home since they started, but they’ve already made a big impact among the local youth. According to Madeline and Rebecca, some of the band’s biggest fans are eight to 12-year-old girls, a contingent they count as perhaps their biggest source of pide, and a driving factor in their mission to open up people’s hearts.

“There’s a little bit of power in what we do because so many people are afraid to push the envelope in terms of being a political band,” says Madeline. “Everyone in hardcore, more or less, has left-leaning ideas, but really talking about systemic oppression has not been a huge conversation. So if we can open the conversation to these issues, that’s all I could hope for.”