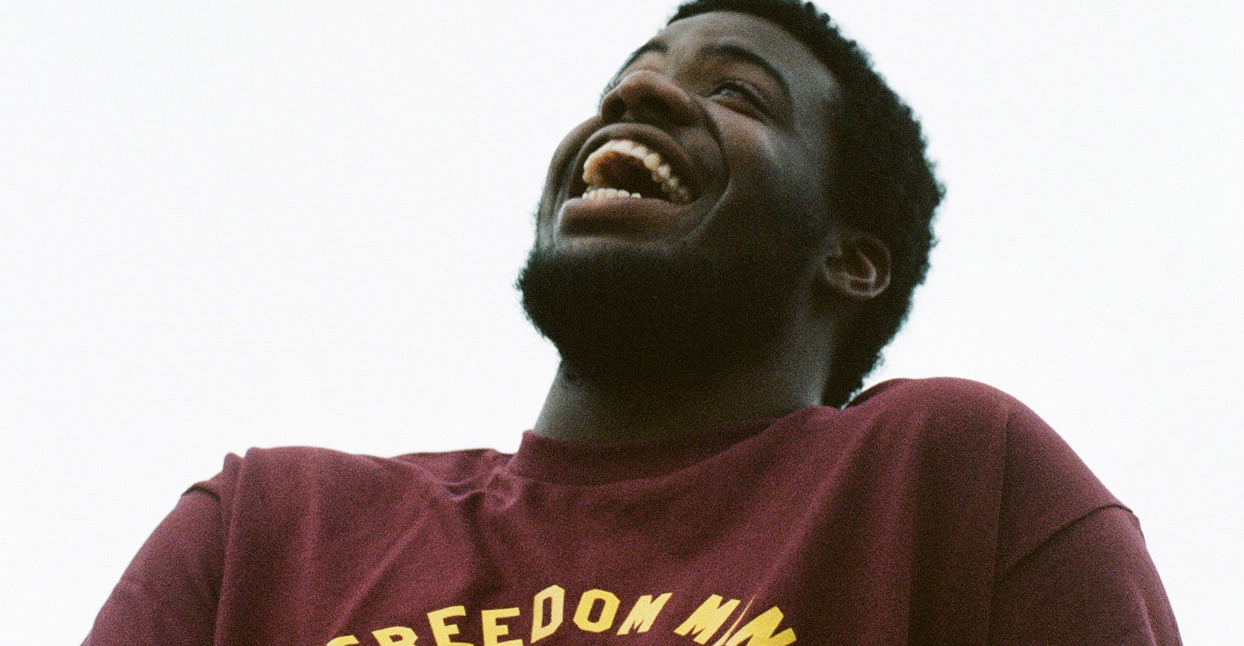 When MIKE dropped MAY GOD BLESS YOUR HUSTLE in June, the 18-year-old rapper became the latest in a long list of artists tasked with reinvigorating the New York City hip-hop scene. In his case, that lofty status is deserved: The album is a showcase for the MC’s buttery flow and his knack for finding oblique ways of looking at the world, pairing them with production that blends chunky soul loops and experimental synthetic sounds. But the acclaim the project was greeted with wasn’t necessarily something MIKE was looking for.

On the day of our interview, MIKE shuffled into a waterfront bar in Williamsburg, Brooklyn, wearing a white T-shirt featuring a quote from the comedian Paul Mooney that read, “I’d rather be free than rich.” That sentiment sums up much of the way MIKE feels, now that his career is taking off. “[The shirt] caught my eye because I wanted to be free of all this bullshit, all these weird feelings of anxiety,” he confesses. “People be thinking because of all this attention I’m supposed to be like my life is all about laughing. But it’s way more serious than that.”

We spoke to MIKE, who is releasing a four-track “surprise thing” titled By The Water today, about the support he’s received from Earl Sweatshirt, the way he uses community to cope with depression, and how his mom ended up on his album cover.

I lived in England with my mom and my sister for five years, when I was between five and 10 years old. I moved around a lot, and that played a big role in my life. It was mad weird being stripped away from American culture and be pushed into British culture, so I listened to a lot of grime. I used to listen to Skepta a lot when he was first coming out, Chipmunk, and a group called N-Dubz. But it wasn’t until I was about to come back to America that I started rapping.

How was it living overseas at that age?

It was cool to be able to see different cultures and how people operate, but it became difficult ’cause I always had a hard time trying to adjust over and over again. After a while, you slowly start to distance yourself and avoid communicating with anybody because it’s too much work.

Do you remember the first rhyme you wrote?

Yeah, my first rhyme ever was when I was living in Northeast Philly, and it was over Madvillain’s ‘All Caps’ song. Philly has this real aggressive and fast flow, and that’s where I lived, so the tempo was really fast. I still have videos from back then and I was like, ‘Why am I talking like that?’ It was me being influenced by Philly artists.

What sort of things were you rapping about on the song?

Did you call yourself MIKE back then?

Yeah, it started off as MIKE, then went to MIKE The Kid, and I was gonna do this thing where it was MIKE and I’d add a nickname for a each project. But I just couldn’t imagine any other name for me. I had MySpace and I have some really embarrassing MySpace pictures, and I didn’t want to pick a name I’d regret—I can’t regret my current name!

Was spelling MIKE in all capitals a reference to MF DOOM?

When did Earl Sweatshirt buy one of your albums on Bandcamp?

That was late last year. When it happened I was like, ‘Nah, this is not happening…’

How did you find out it was him? Did you get an alert with his real name on it?

Yeah, I got the email and it had his real name on it [Thebe Neruda Kgositsile] and I bugged out. Maybe it was somebody trying to prank me. But two months later he was in New York and my homie Wiki gave me a chance to meet him.

What did Earl buy? And do you remember how much he paid?

He paid $45 for longest day, shortest night, and then $15 for this other little mix I’d made.

You’ve formed a friendship with Earl since then. What sort of advice has he given you?

He stressed the importance of knowing your own lane, of incubating and knowing those people [around you] and helping them achieve their fullest potential. When everyone around you is doing great, that’s when you do great yourself and grow, keeping that engine running. He said he appreciated my music ’cause it’s very reflective—I’m talking about horrible things that not everyone relates to, but he got it.

If you could add Earl as a guest to one of the songs on MAY GOD BLESS YOUR HUSTLE, which one would it be?

‘Hunger’ or ‘ROCKBOTTOM.’ I feel like ‘Hunger’ is definitely his bag; he’d have bars for that and I can see him on that song.

Is there an overall concept behind MAY GOD BLESS YOUR HUSTLE?

At first, it was meant to be titled By The Water. I was going through a lot of depression and I just didn’t feel good about what the project was. It was meant to be about me leaving one place and going to another place and growing, basically. But I’d ran away from home and left for nothing, and I thought these were all liberating things for me to do. I don’t regret doing them but I was like, ‘Fuck, now I have to deal with this shit, too…’

Before MAY GOD BLESS YOUR HUSTLE dropped, I had like zero dollars to my name. I didn’t even have a bank account—I was literally out here living and working on music, and my homies would help me out by buying me lunch. Thebe was one of those people who helped me out by buying lunch.

Where did Earl take you for lunch?

Was this around the time you decided to switch up the album title?

Yeah, because it was like, no matter what, I can’t give up. I was close to [giving up], but I had to push on and keep going. That’s the hustle. The people around me had so much faith. I literally did not have shit, but the people around me… They put me in a place where I realized I have to be there for them. My mom used to say, ‘God bless your hustle,’ so I rocked out with that. When I made that transition in my head, it was like, ‘This is the push,’ and how I get to push this shit on.

You mention depression a few times on the album. How bad did it get?

I wasn’t leaving the crib, I’d just stay home and get very anxious. I want to be alone and figure out how to be independent, but I was also scared to be alone ’cause that’s when your anxiety feeds you the most bullshit. I couldn’t trust anything, I felt really alone, I couldn’t even contact people. I ran away from my aunt’s crib and never called. I’d say I was going to my dad’s crib, but go to a friend’s crib and stay there. Two weeks later, I’d text [my aunt] and apologize for being so distant. It was a time when I just didn’t feel good about myself. There was all this fame shit; press was coming into the picture and people around me were looking at me in a different light, but it made me distance myself from everything.

Retreating like that sounds similar to the way you coped with moving around as a kid.

Exactly, like a defense mechanism. Before I went through that depression, I could see it coming and was like, ‘Fuck, I don’t want to deal with that.’ But it naturally happened. The flip side is me finding those people who are around me now. Everyone from every side came to take me in and embrace me. That really inspired the shit out of me.

Yeah, with people, especially family, and that time I was alone I got to realize, ‘Oh shit, I do actually have a family and a community there for me.’

Have you heard the theory that some musicians write their best music while they’re depressed or going through a bad time?

Yeah, I mean it could be fact, but I’ve also made some very good music when I was hella happy. But making music does help me get out of those depressive states. One of my first projects, Belgium Butter, I was so depressed—it was another one of those times when I moved from Philadelphia to Brooklyn—and I was trying to get back in the community and figure it out. I didn’t know anybody. So I wrote the project Belgium Butter and released it. The feedback people gave me helped build up some confidence and allowed me to be happy.

Yeah, for a lot of the older projects, there were times when I couldn’t sleep and I’d stay up all night. A lot of the houses I stayed in, I’d be, like, staying with my dad’s girlfriend and they already had their own families and I’d be distant. I’d sleep through the day so I wouldn’t have to interact with them and I’d have school the next day. Back in the day, I used to have to wake up at 5am to head to school in Bushwick. My whole shit was fucked up, I’d be sleeping in school.

School was so trash. Ever since a little kid, I’ve always been ‘nah’ to school. I know it’s for some people, but not for me. I don’t like being around too many people, and the way teachers interact with kids is crazy and shit. So my grades are trash! My English grades were always good, but from not being in class and being distracted, I have bad grades. The first marking period would be As, Bs, and Cs and the rest would be trash. Instead of paying attention, I’d write notes and they’d become full songs.

Do you still write lyrics in a notebook?

I use my phone now and I hate that shit. I feel like that’s fucked me up. I mostly used to write in books. I want to go back to that.

What’s the significance of the photo on the cover of MAY GOD BLESS YOUR HUSTLE?

That pic was a video of my mom. She was crossing a bridge in Nigeria and was so scared. She was like, ‘Can I go back?’ The guide is like, ‘Nah, nobody goes back—you have to keep going forward.’ She was crossing a bridge to another place. She was going somewhere else. My mom played a big role in terms of hope. I dropped the album June 21st and had been doing all this work through the summer. Now I’m about to go to England to see her.