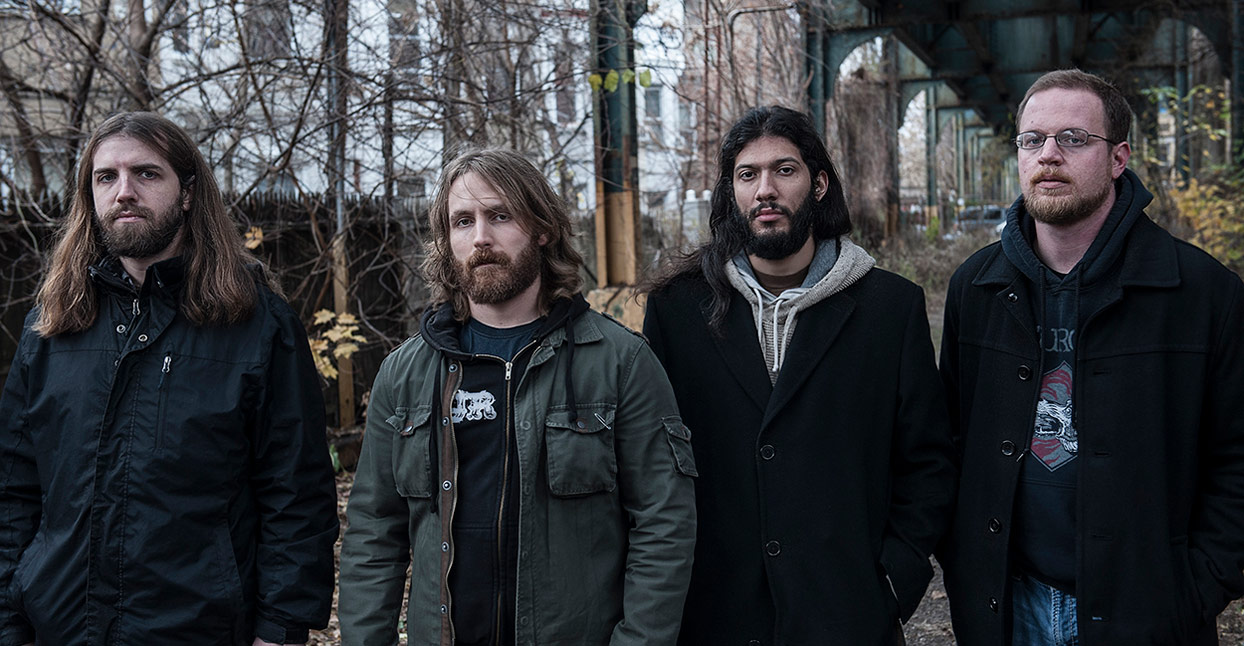 Brooklyn’s Pyrrhon have been ignoring death metal norms since they formed in 2008. On their third full-length, What Passes for Survival, the Brooklyn-based powerhouse assault the eardrums with more than 45 minutes of raw, calculated brutality. Their unconventional sound bypasses stale death metal riffage, choosing instead to dabble in experimentation, with complex rhythms and angular, discordant guitars. That sound supports damning lyrics that put political and social injustice, as well as the less savory aspects of the metal scene, in the crosshairs. It’s brutal death metal, to be sure—it’s just a different kind of gore.

We sat down to chat with vocalist Doug Moore, recently crowned the “Sexiest Dude in Metal,” about his cutting lyrics, the future of heavy music, and his side project Weeping Sores.

Where do you find lyrical inspiration?

I’d characterize my approach as more on the intuitive side of things than the studied side. I choose subject matter mostly by cherry-picking the troubling or anxiety-generating parts of my internal monologue and trying to work through whatever’s bothering me until I can vent it into a set of lyrics. I’m a very anxious person, and the world provides no shortage of causes for unease, so this process has provided a very important emotional escape valve for me. Calling it ‘therapeutic’ feels corny, but writing these songs certainly helped me get stuff off my chest.

Some Pyrrhon lyrics are more personal in nature, but as world affairs have taken on an increasingly nightmarish cast in recent years, they’ve come to occupy more of my thoughts and I’ve become increasingly aware of the way they intersect with private life. The lyrics on What Passes For Survival reflect this shift, though hopefully the political element translates as introspective rather than as some kind of agitprop. Extreme metal is not exactly the optimal medium for polemics, and I wouldn’t have a very good stump speech anyway.

The track, ‘The Invisible Hand Holds a Whip,’ levels some serious charges at the system. Was that track written before the election?

That song was written during the 2016 primary season, and was a reaction to the abrupt rise of populism as the dominant narrative tactic in American politics. Actors on both sides of the left/right divide framed the election as a battle pitting one group of nefarious elites or another against salt-of-the-earth ‘regular folk’ who are tired of being screwed over by the secret machinations of the ruling clique. This type of narrative resonated partially because there is some truth to it. America’s economic system is currently set up to benefit a very small number of people, to the exclusion of virtually everyone else. This fact is difficult to miss in a place like New York City, where the sight of poor people dying in the gutter beneath literal gilded towers is just part of your morning commute.

But I’m naturally suspicious of populist politics and politicians regardless of ideological inflection; they tend to dramatically oversimplify problems, make unrealistic promises to their supporters, treat their adversaries as existential threats, and encourage knee-jerk tribal antagonism. The history of populist politics is full of scam artists and grifters, of which the current president is a colorful example, and populist movements end with bloodshed in the streets all too often—as we’re already experiencing firsthand. I was really sweating all this stuff when I wrote ‘The Invisible Hand Holds A Whip,’ and naturally I’m no less worried now than I was last March.

This particular album was animated in part by concerns about the rising undercurrent of tribalist violence in American politics, the cruelty our society shows its most vulnerable members, and humanity’s global failure to do much of anything about climate change, among other things.

When it comes to your music, Pyrrhon is pretty forward-thinking. Do you see death metal as relatively stale?

I guess it depends on how you look at it. There are tons of inventive bands working in or around death metal right now, and I’ve certainly had no trouble finding compelling new music in that style lately. But there’s also lots of dumb, bad, redundant death metal coming out now, like there has always been. It does seem that both the music press and the fans tend to glom onto newer death metal bands that strike me personally as generic or retrograde. I love the ’80s and ’90s classics as much as anybody, but I don’t have much interest in hearing them reworked 25 years after the fact. Those albums sound so crazed and dangerous because the musicians were pushing themselves out into the unknown, trying new things, and playing at the very edge of their abilities. Almost none of the current crop of ‘old-school’ death metal bands has that kind of fearlessness and maniacal energy. To my ear, it mostly sounds pretty weak next to the genuine article, but there’s no accounting for tastes.

A lot has been written about metal getting a little too cozy with the more fascist ideologies. You make references to that in ‘Goat Mockery Ritual.’ How do you think metal can clean up that problem?

It seems to me that the best way to deal with these boneheads is just to ostracize them. You ultimately can’t stop people from making bad art about their revolting political ideas, but you can starve them of support and rain scorn on them until nobody else wants to be seen with them. Unfortunately, the threshold for misbehavior necessary to evoke this kind of response is quite high because of how pervasive regressive attitudes are in metal culture. A lot of canonical metal records were written by various species of bigot and psycho, and many people whose sympathies were shaped by those ideas are in positions of power in the genre now. And while that’s unfortunate, it’s also unsurprising—a style of music so thoroughly wrapped up with violence, hatred, and barbarism is, of course, going to appeal to some violent, hateful, barbaric people. On some level, most metal fans know this, which is part of why so many of them fly into a defensive rage when the subject comes up.

To further complicate matters, it’s often impossible to differentiate between sincere appeals to racism or authoritarian politics and troll-y transgression-for-its-own-sake—a kind of coyness that is popular among both metal bands and the online right. This kind of edgelord shit is just totally pervasive in metal, a genre where iron crosses are so common as to be basically invisible, and where you can literally scream excruciating descriptions of various sexual tortures for a whole album and everyone will just shrug. In this kind of environment, where basically everyone has enthusiastically consumed at least some ‘problematic’ work regardless of their actual sympathies, it becomes difficult to determine which kinds of behavior are genuinely reprehensible and which should just be shrugged off as ‘part of the deal.’ There are nonetheless plenty of clear-cut cases of bad guys whom most sane people would agree to shun, but the truth is that the line differentiating fascist sympathizers from run-of-the-mill metal scumbags is often much fuzzier than some people would like to admit.

Can you tell me a bit about the trilogy of tracks on this album? Is there release in death, and do you see mankind—particularly Western Civilization—as sheep or drones just going through the motions?

‘The Unraveling,’ the three-part song you’re referring to, was written shortly after Election Day last year. It’s essentially a lament for the version of America that I read about in history and civics books as a kid—the version whose stated values have some modicum of meaning and whose historical arc bends towards justice. It’s unclear to me whether that version of this country ever existed, but any perceived shadow of a unifying civic spirit or commitment to the national well-being among either the voting public or the political class has been pretty well expunged now. America raises its children to believe that their national identity depends on holding a set of political and philosophical ideals. Maybe I’m a rube for ever believing a word of that premise, but I did, and it was painful for me to see it trampled on such a massive scale. What happens when the people of such a country start abandoning even lip service to its core ideals, dramatically and publicly? I suppose we’ll find out.

You have a side-project of sorts, Weeping Sores that is very different than Pyrrhon. Has that been a cathartic outlet for you?

Yes, Weeping Sores has been a joy for me to work on. I was a guitarist before I was a vocalist, but my practice lapsed for a few years after I graduated from college. Weeping Sores came about because I wanted a reason to get back into practicing regularly and decided to start a new project where I focused on writing simple, melodic riffs. The final form of the band has turned out a little more involved than I had intended, but it has been really gratifying for me to write ‘prettier’ music and to play again regularly in general. Playing an instrument is a very meditative practice for me, and I need all the relaxation techniques I can get these days. I’m currently working slowly but surely on a Weeping Sores LP, which I hope to finish some time next year.