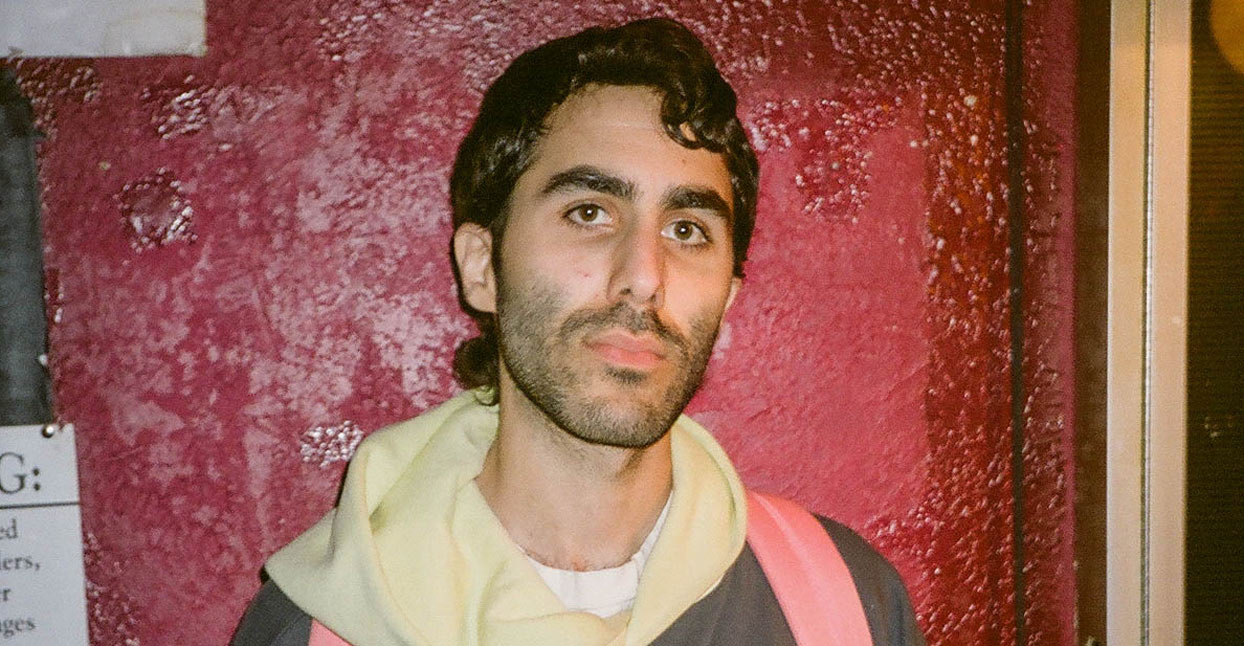 Makan Negahban was a musician before he became a painter. The Los Angeles artist, who makes music as Pomdip, began painting for a living in November 2016, and has quickly become a hot prospect on the L.A. art scene. His most recent exhibition—and first solo art show—at co-LAb Gallery in Highland Park received, according to gallery owner Kristin Hector, the highest number of pre-sales of any show the space ever hosted. But while experimenting with acrylics has taken up most of his year, he has also found the time to complete his fourth solo album. A Jar at the Jamboree was released earlier this month by New Los Angeles Records.

Long before he ever picked up a paintbrush, Negahban approached music by asking how painting and music-making are related. He’s always thought about color, the aesthetic flow of a record from start to finish, and how songs can be arranged to fit together like a collage. A Jar at the Jamboree is perhaps his most ambitious project, taking four years to complete; he also worked on another record at the same time, which will be released later this year. He prioritized Jamboree because it captures the way he feels about the state of his life right now—working as a full-time artist, living with his long-term girlfriend and their dog, and having a little more financial freedom. His goal was to create something that felt tangible and nourishing.

A Jar at the Jamboree is vibrant and flamboyant, sprinkled with tropical melodies inspired by the music of Harry Belafonte and S.E. Rogue; it blends neo-psychedelia, bedroom pop, and worldbeat. Negahban seems to have caught the same vibe as Noah Lennox, aka Panda Bear of Animal Collective, creating pop music for sound junkies, potheads, and hip shakers.

Jamboree takes its name from a riddle that Negahban invented to describe its sound. We’ll let him explain.

There’s a riddle in the title, A Jar at the Jamboree. Can you explain that for us?

A jamboree is like a party, and I’ve always liked that word, it’s just a fun word. It makes your mouth move in a good way. There’s always good juicy stuff in a jar, like peaches or strawberry jam. So essentially, what it comes down to if you break it down, is there’s jams for the party. A jar for the jamboree.

When you listen to the record and then reflect on the title, it all makes sense.

Yeah, I’m actually pretty proud of that. It goes hand in hand with having the name of the record first, too. It might have been harder to write the songs first and then come up with the title and achieve that same effect.

So you knew the name of the record before you started writing any songs. Is that your usual process?

Normally I’ll write a couple of songs and then the name will come; the name comes early in the process, for sure. Because for me, each of my records—I don’t want to call them concept records, because there are no big ideas—they all have to click into a certain aesthetic and emotional vibe. So finding the title really helps me solidify that.

You said the reason you decided to put out A Jar at the Jamboree, as opposed to a more somber acoustic record you completed before it, is because your current surroundings heavily influenced the record’s sound. Can you elaborate?

More than anything it’s just a seasonal thing, because it’s the summer and it’s a great time for these songs to come out. It would feel out of place to release [the acoustic record] in summer. The plan is to release that in the winter, so it’ll come out in December. I wasn’t really pushing for [A Jar at the Jamboree] to get released, because I had my solo art show in June, but my label only had [an available] release date for June, so I really just slammed myself with a bunch of work. The past couple of months, I’ve been sitting in a room like a freak, just working. I didn’t go out at all, I made sure to sleep well and exercise. It was exciting because I got to test my mettle.

You’ve been working on the record for a while, so although it’s all coming to a climax at the same time as your art show, you have been putting it together over a number of years. Is that right?

Yeah, the record was done in maybe February. I had one more song to finish that I had the skeleton for, but I needed to flesh it out. In the last two- or three-month burst I had to master it. I do all that myself—mixing, mastering, it’s all me—and I sequence it. And the way I’m releasing it is kind of unique, because I’m not doing vinyl or a CD. What I’m doing is making a zine, which I call a visual companion. I’ve made a bunch of art for it, and I’m going to bundle it with a custom USB. On the USB, there’s going to be the record, and an expanded version which I call ‘the director’s version.’

Do you work from your own home studio?

Yeah, I’m of the opinion that as long as you have a good mic, a good preamp, and a good set of monitors, you’re good to go.

I imagine the studio is very colorful.

That’s actually something me and my girlfriend joke about. She decorates the house and makes the house look really pretty, but if I was living by myself there’d be zero art on the walls. I would literally have a mattress and a table; the walls would be blank. It’s just how I operate, I don’t know why, but I don’t have an instinct to decorate. So no, it’s not colorful.

But you do all your paintings at home, right?

I do paintings in my house, so in a sense yeah, it is colorful because there are paintings strewed about. It’s colorful by proxy.

So where does your interest in bright colors and colorful sounds come from?

I was a musician before I was a painter. In a lot of ways I approached music—before I was a painter—like, ‘How would a painter make music?’ The idea of these colorful sounds, I think it comes from that same place. I wanted to make a record that sounded the way Peruvian quilts look. I ultimately have a very visual way of writing music.

You credit Harry Belafonte and S.E. Rogue as major influences for much of the music on A Jar at the Jamboree, but your music doesn’t sound anything like theirs. Can you explain how you interpreted that influence?

When I listen to those records, they’re really happy songs and there’s this authenticity to it, something under the surface that gives it depth. It’s like this unabashedly happy music that anybody can listen to; the melodies will catch you and bore themselves into your brain. There’s something there—it probably has its origins in Latin America or Africa. For the most part it’s really C-major, happy celebration music. I wanted to channel what I like to call true happiness. It’s a happiness that comes out of struggle. I listen to pop music, and pop music is really happy, but you don’t feel that same thing. It feels empty, more manufactured. When I hear a Harry Belafonte song, I just feel better. So I guess the way I channeled those guys, I wanted to tap into that vibe, an earned happiness, so that when you listen to it, it’s more nutritious—it’s not just candy, it’s more like eating good fruit. So, melodies and surface stuff aside, maybe I don’t sound like them, but the goal was to get an earned fun, a fun that really comes from a good place.

You mentioned their happiness comes from their struggle. Do you feel you’ve overcome struggles of your own?

At the end of the day, I’m a very privileged person, so I don’t want to say that. [Although] I definitely have had some bad years. What it is mostly is that I feel like I had the vibe they were putting out. You connect with art that’s relatable to you. They make aesthetic choices that click with me. When I heard those songs, I was like, ‘I have this in me, I swear to god I have that vibe in me,’ that authentic joy.

Your parents are Persian-American, so I’m curious to know what music you were exposed to growing up.

It was random stuff. My fondest memories are of my dad playing Louis Armstrong and Ricky Martin. But Persian music in particular? Persian pop music is really close to cumbia and reggaeton. If you take out the vocals in a Persian pop song, it’s essentially like a cumbia beat. It’s something we talk a lot about in my band [Bür Gür], about the difference between the cumbia rhythm and the basic pop rhythm. There’s crazy parallels between Persian music, cumbia, Latin music, and reggaeton. One thing that I recognized very quickly growing up was that certain kinds of music activate different responses, as far as dancing goes. Like if you go to a beat show, or a hip-hop show, you’re going to be nodding your head. If you go to a cumbia or reggaeton show, your shoulders and hips move. So I was very attuned to that idea of the hips shaking and the shoulders moving, and it was a big part of this record, because I really wanted it to be hip-shaking music.

You’ve played it live—do you think you’ve achieved that?

Yeah, [with] some people. Sometimes I’ll have my buddy Chipmunk play with me, because it’s fun playing with him. He’s a Mexican kid and he and I can both feel it the same way—we’re hip-shakers. If everyone’s dancing, I’ll take that.

Is it true that last year you started painting for a living?

November 2016, I was like, ‘Painting is my life, this is my number one priority. Every morning I’m going to wake up and I’m going to put at least four hours a day into this, at least, there’s no exception.’ I wouldn’t say I make a living, I don’t live solely off painting, but within a month or so, I made more money painting than I ever did with music.

With painting now your main focus, how does making music fit in?

Painting takes more time, for sure. I still find time to make music, but it’s not in the same way I approach painting. With painting, I am activating true discipline, true work ethic. I approach painting the way an athlete approaches sport. There’s no, ‘Oh, let’s get fucked up and paint,’ there’s none of that, no sir. But with music, it’s a little bit more fun now, in a weird way. I wouldn’t say I approach it with as much discipline, but I definitely approach it with as much emotional seriousness.