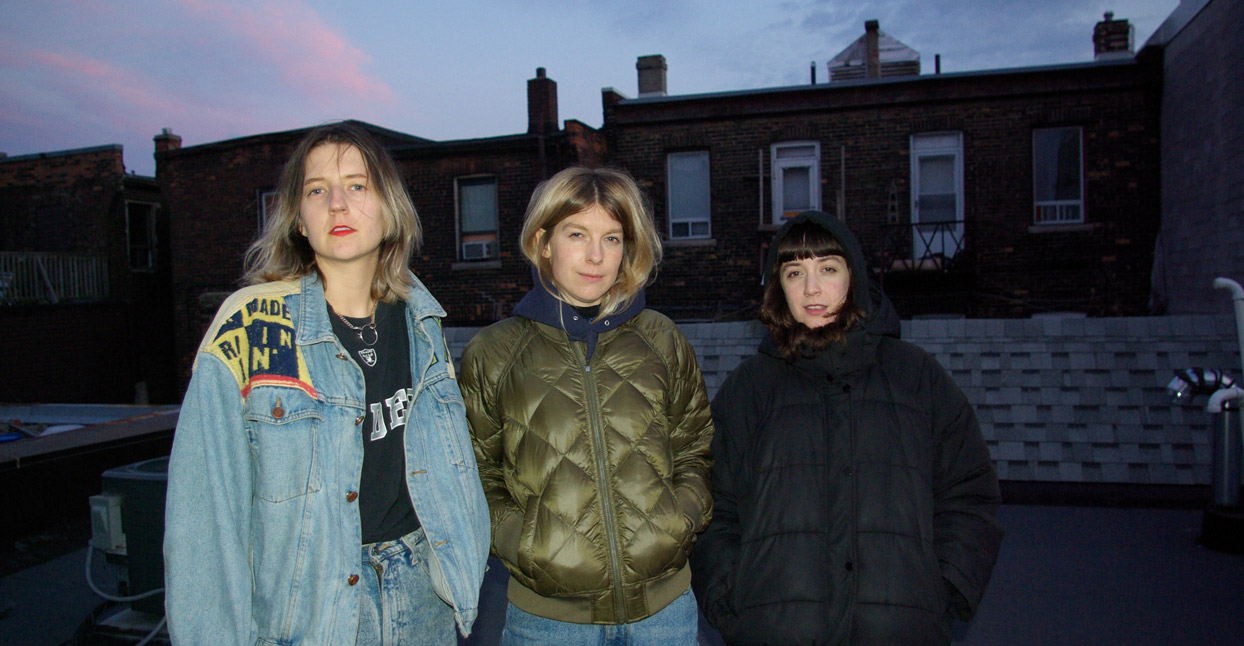 Toronto trio Plasmalab’s snarling, squealing sludge-punk fires guttural rage at a broken world, while at the same time laughing at its absurdity. Like Jennifer Herrema fronting Flipper, with the hotwired repulsion of Crime, Plasmalab’s barrage of warped riffs and grinding low-end repetition is dosed with an acid blast of skin-peeling screams.

Band members Jacqueline Lachance and Katie Hernandez first met at NSCAD University Nova Scotia College of Art & Design, and now trade off on guitar, bass, and vocals with drummer Morgan Dowler keeping the bash-beat steady. Their debut LP Love / Life, out now on Bruised Tongue, delivers knockouts throughout. Some are as short as 46 seconds, but the band truly goes the distance on 11-minute slugfest “Hole In The Ground & Twenty Grand.” This transcendently pissed-off two-part epic starts with Lachance sneering over damaged guitars before steering into a no wave no man’s land, as Hernandez unleashes some of the year’s most cathartic vocal chord shredding.

On the eve of their record release show, Plasmalab sat down to discuss art vs. music, Toronto frustrations as fuel, and the political power of memes.

Jackie, I became familiar with your visual art through your videos for musicians like Dirty Beaches, Guilt, and No Negative. Did projects like that inspire you to start this band?

Jacqueline Lachance: 100%. I’ve been involved in music since I was a teenager. It’s the thing that inspires me most. I’ve played music the whole time too, but there’s always been a combination of being really self-conscious, finding the right people, and finding a place where I felt comfortable enough to create. I lived in Montreal for five years, and everyone I know there plays in an incredible band. For a long time, working on music videos was my way to contribute. But I always had the idea in the back of my head to start my own band. It took me a long time to get up the guts.

How did the three of you come together?

Lachance: When we moved to Toronto, we weren’t sure how to fit into the scene, so we decided to try this. There was no agenda, and it’s still like that. We don’t have any grand expectations. We just want to be creative and maybe get some rage out.

After living in Halifax, Montreal, and now Toronto, what differences have you noticed about the music communities?

Lachance: You’re gonna get me in trouble! It’s harder to be an artist here. It’s expensive, and there’s not enough space.

Katie Hernandez: There’s definitely not as much freedom. Your time, money, and energy are all expelled more in Toronto.

Lachance: If you have less time to spend on your band, or think, or be creative, it makes what you come out with a different caliber. It’s honestly frustrating to be a musician in Toronto, but you get paid better for shows here. In Montreal, that can be kind of bad, but getting to that point in Toronto is also a struggle. At the same time, Canada is small so I still see friends from Montreal and get inspired.

Some of the best sets I’ve seen you play were in garages and basements. Do you gravitate towards those spaces?

Hernandez: You’re bringing up the shows where I was the most drunk! They’re definitely more comfortable and bring out a different kind of energy. It feels like the stakes are lower, and is strictly about having a good time. Nobody’s stressed. Sometimes at bars, there are people who aren’t there for the same reason, or are on a weird vibrancy level. If the space isn’t yours or your friends’, you might be ready to rage, but you can’t.

You’ve mentioned rage a few times now, but you also laugh a lot when you’re playing. That seems like the only way to respond to the ridiculousness of the world sometimes.

Lachance: Oh yeah, the world sucks! Going back to your question about cities, I felt frustrated when I moved here about how hard it was to even find space in a studio. In Montreal, that kind of thing comes easy, so this band was very cathartic.

Hernandez: When we wrote these songs, there was no plan. They were just birthed out of being in a space together. Sometimes I just make noises so what you might think is a beautiful poem is really gargling coming out of my throat.

Lachance: That came out of a project with a collective in Montreal called Palimpsest. They put out a publication, and I made a similar piece for it. I dropped out of art school because I felt disenfranchised. You’re supposed to be free to challenge norms, but you have to do that within the same kind of structure as, say, an economics degree. My relationship with art has always gravitated towards real-life action. The Situationists were one example of art, life, and activism coming together. I wanted to make clothes and those sentiments felt super relevant. When Trump got elected, I decided to donate everything to the Southern Poverty Law Center.

You’ve also got one of my favorite Instagram accounts. Do you consider memes an act of political subversion?

Hernandez:  There are different levels to the meme world, obviously, but there are artists making subversive memes like @scariest_bug_ever.

Lachance: We had a psychotic meme thread last summer inspired by @wolf_eyes_psychojazz.

Do you make memes?

Lachance:  I made one about the Rehearsal Factory. Not sure if it’ll translate to people outside of Toronto, but anyone who’s spent time at a jam space can relate to an annoying guy with a chin strap asking if you need help and someone constantly covering Weezer.