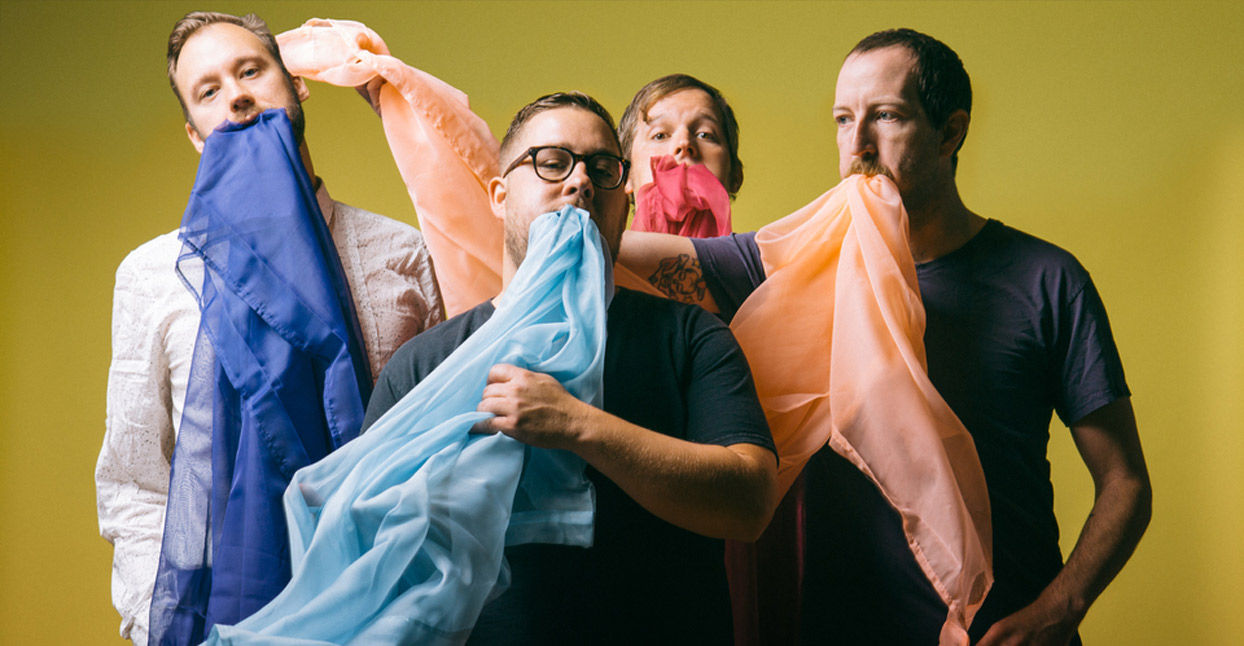 The latest album from Pissed Jeans, Why Love Now, sports a cover that is all pastel pinks and blues, with a photograph of the boys in suburban cookout-style collared shirts. Most of the band members are sporting smiles. Vocalist Matt Korvette even has his shirt casually unbuttoned. It’s only the deadpan stare from drummer Sean McGuinness that hints that the band might have more up its collective sleeve than well-groomed appearances would suggest.

On Why Love Now, Pissed Jeans serve up a collection of harshly humorous looks into the straight white male psyche. The lead single, “The Bar Is Low,” is the band’s most polished and accessible number—with an almost-ZZ-Top bar bounce, though male deprecation is classic Pissed Jeans. The hammering noise-rock showcased on their previous albums is on full display here as well, with Randy Huth’s rumbling bass anchoring barn-burners like “It’s Your Knees,” and “Worldwide Marine Asset Financial Analyst.” Huth and guitarist Brad Fry operate as twin battering rams for most of the album, making the moments when Fry steps out with a solo particularly effective. This record is Korvette’s most varied performance yet, as he ranges from almost tuneful singing to the hoarse barks utilized on earlier albums. It’s an album filled with self-absorbed characters—from the target of “Not Even Married,” a recently dumped friend partying away the “trauma” of a “squeaky clean break,” to the aforementioned financial analyst who watches the “ice caps melt away,” but is only brought to tears by an accounting error.

And then there’s “I’m A Man,” the vicious Lindsay Hunter-penned-and-performed screed at the album’s midpoint. Hunter’s the author of two short-story collections (Daddy’s, and Don’t Kiss Me), a novel (Ugly Girls), and the former host of a flash-fiction focused reading series in Chicago. She’s honed the craft of creating maximum impact with minimum word count, and that talent is on full display here. With the condescending opening line of “Hey, office lady,” she assumes the persona of a sexually aggressive male office worker, replacing a water cooler and propositioning a female co-worker. It’s a stop-dead-in-your-tracks listen, with a sickening mix of tired pick-up lines like, “Do you take dic-tations? You get it?” and more naked threats like “You ever been stapled? Never mind, we’ll get to that.” There’s no loud guitars or catharsis to soften the sting, just a drum track and this slow violent drawl that ends in a harsh reminder to steal office supplies. The request would be laughable if this whole controlling mix of negs and boasts wasn’t so goddamn recognizable to anyone familiar with the rise of pickup-artist culture. It’s bleakly funny in the uncomfortable way Pissed Jeans often is (see: the music video for “Bathroom Laughter” where an infomercial starts innocently, but swiftly transitions to a series of cartoonish accidents ending in the bloody death of the perky blonde hostess), but more visceral, more focused. The song was originally longer, but had to be cut down to fit the drum track.

In our conference call with both Hunter and Korvette, Korvette compared the shortened version to “doing a shot vs. chugging a bottle of liquor,” noting that he had to “accustom” himself to hearing it. He says the song felt personal, an “indictment” of his own behavior, though Hunter is quick to say she can’t imagine Korvette saying anything similar to her invented narrator.  It’s something that will crop up in our conversation frequently—this album is directed internally as much as externally. “I’m not trying to be this person from a pedestal of woke-ness,” he ruefully laughs, “ I’m just trying to work it through with other people, with my audience.”

Hunter and Korvette have been friends since she mentioned a Pissed Jeans song (“False Jesii Pt. 2”) was a frequent writing soundtrack in an interview with FANZINE. Korvette e-mailed her after spotting the nod, and they struck up a close-knit correspondence. When Korvette originally approached Hunter about contributing to Why Love Now, the plan was for her to pen something for the liner notes. “I was in the middle of writing my new novel (Eat Only When You’re Hungry, to be released on August 8th, 2017 by Farrar, Straus and Giroux) and I took a break from that and wrote this crazy rant/screed,” Hunter explained. Then the two fell out of contact for a period of time while Hunter had her second child. During that time, Korvette reconsidered Hunter’s role on Why Love Now, as he was concerned that her work might be overlooked. “We had this drum track that I didn’t have anything for, but I thought it was really cool and fit within the Pissed Jeans Universe but wasn’t really a traditional Pissed Jeans song. The idea of Lindsay reading something over the top, I thought, was way cooler and better and couldn’t be ignored,” he says. Hunter sent the band a couple of pieces, Korvette picked what became “I’m A Man,” and Hunter recorded the track in her basement using software called Audacity.

“It’s so funny to hear people’s reactions,” chuckles Hunter, recounting how friends have watched unsuspecting bystanders freak out when they run into the track at coffee shops and record stores. “There’s just a few guys who just … they can’t hear their own perspective thrown back in their face,” says Korvette, before assuring Hunter that he’s only “heard people love it or quickly dismiss it as strange.” He reaffirms the strong impact the track had on him personally, and the conversation moves to the gendered expectations they both face. “I feel like I never sit there and think ‘I’M A WOMAN. I’M A WOMAN,’ but I feel like people are constantly pointing out to me that I’m a woman,” Hunter says with a sigh. “I can’t tell you how many times someone has told me, ‘Oh, you write like a man,’ like I’m supposed to be flattered by that. ‘Oh, women tend to write about their feelings, and scenery, etc, etc.’ No, they fucking don’t. They write about everything.” I can almost hear the vigorous head nodding from Korvette over the phone as he adds, “The ‘female’ category has to go. I’ve been trying to use the male qualifier as much as possible, just to counteract that.” He mentions a recent Boston gig, where “I was going off about how guy bands still exist, you just have to look for them. Pissed Jeans, we’re out here, we’re a guy band, don’t worry about it.”

Both Hunter and Korvette are adamant about how our society functions with entrenched misogyny. “It’s OK to admit you have sexist tendencies and that you are privileged and are taking advantage of the world as a white guy, and try to work on that, rather than this position of denying any wrongdoing on your own part,” Korvette says.

“People are always talking about how could women vote for Trump? Fuckin’ easy. They think that’s what they deserve. It’s ingrained in our society—this hatred,” Hunter says bleakly. Korvette agrees with her, but offers a small bit of hope: “I feel like if I work on myself, it will rub off on all the people who have to deal with me on a daily basis. Writing songs is great, but you know, I’ve got a long way to go.”

At this point in the conversation, it’s clear Hunter’s inclusion on Why Love Now was born of mutual admiration, but also Korvette’s recognition of the limitations of his experience. His voice isn’t enough. Korvette is also keenly aware of the stories that build up around punk music. “I hate this narrative where women don’t like feedback or guitars or screaming,” Korvette vents. “I would love to just shake that up a bit, just by offering the perspective of other people who are into this stuff, not just people exactly like me.”