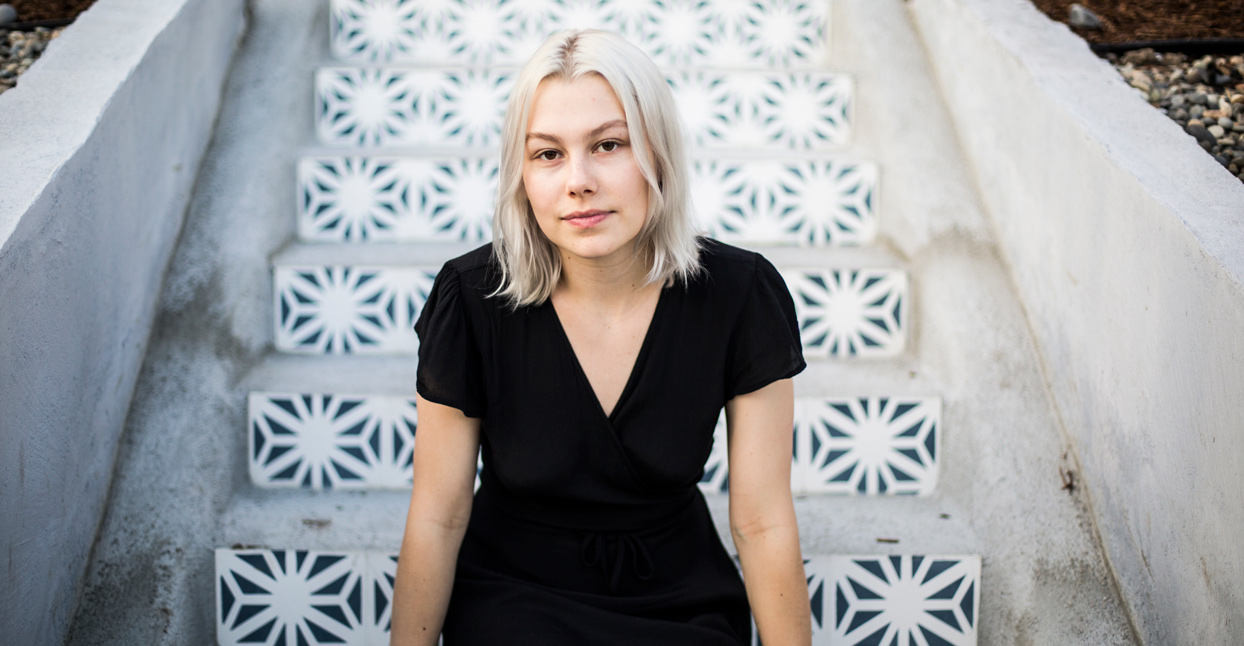 Phoebe Bridgers and I are parked in front of Bedrock L.A., a large Echo Park practice facility that’s been the workspace for artists like Father John Misty and Eleanor Friedberger. It’s a humble building that creates a sense of camaraderie among the artists that work here; there are pinball machines in the foyer and, until recently, beer in the vending machines. For Bridgers, it’s where she shared a lockout—a practice space where you can store equipment—for a couple years with a drummer ex-boyfriend named Marshall, using the space to practice, drink with friends, and write the intimately personal songs that would eventually make her upcoming debut, Stranger in the Alps. “So much of L.A. is curated,” Bridgers says, “but I like this place because it kind of sucks.”

Bedrock is supposedly just a couple blocks from the street that provides Bridgers with one of her song titles, “Scott Street.” It’s a quaint residential stretch that the song’s subject, Marshall, travelled to make a daily pilgrimage to buy cigarettes. But when we leave Bedrock to look for it, it’s nowhere to be found. “I’m directionally challenged,” she confesses before realizing that the street is actually called “Scott Avenue,” which explains why GPS isn’t able to help us. When we finally find it and get out to walk through the quiet row of homes, purple jacarandas flowers stick to our shoes. “I guess ‘Scott Street’ is about being really lonely,” she reflects. “Sometimes I want to cop out and say it’s about a lot of different things, but really it’s all there. It’s just a diary.”

You wouldn’t think Stranger in the Alps was a somber record if you judged it only by its title. The phrase is taken from the now-infamous way the edited-for-TV version of The Big Lebowski changes Walter Sobchak’s line, “Do you see what happens when you fuck a stranger in the ass” to “Do you see what happens when you find a stranger in the Alps?” Bits of Bridger’s wry humor seep into the songwriting, too, bringing moments of levity to lyrics about heartache, depression, and even serial killers. On “Smoke Signals,” she drives fast because “fuck the cops,” and on “Motion Sickness,” she is given $1,500 to see a hypnotherapist, but only winds up going once. But mostly, the album studies the mechanisms of what makes a sad song; the forms may change—“Motion Sickness” is breezy, mid-tempo pop-rock while “Funeral” uses spare, acoustic songwriting to put her depression in context—but the perspective remains sharp, detailed, and insightful.

“My favorite music, like ‘You Missed My Heart’ by Mark Kozelek, has this quality about it that doesn’t quite make sense,” she says. “Why, when you place these two details next to each other, is it sad? It’s something about the weird connections people make from phrase to phrase, where you’re not totally sure why they made that choice, but something about it is heartbreaking. Elliott Smith’s ‘Condor Ave’ or ‘2:45 AM’ are pretty sad because Smith is talking about being lonely in the middle of the night. It doesn’t make sense, though, why it’s as sad as it is. It’s more than the sum of its parts. You don’t have to italicize the subtext.”

Bridgers interest in music goes back as far as she can remember. She grew up in nearby Pasadena, with her bluegrass and folk music-loving mother happy to push her towards this passion. “She was a weird brand of momager,” Bridgers recalls. “I was by no means forced into some pop studio, but if someone whose music I admired was standing close, she’d be like, ‘Go get a picture.’ But it would be the weirdest people ever, like Richard Thompson.”

This willingness to approach her heroes has extended into adulthood, and has become a useful skill. In conversation, she drops casually drops anecdotes featuring Julien Baker, Ryan Adams, and Conor Oberst. Adams produced her three-song “Killer” single, released in 2015, while Oberst pops up to duet “Would You Rather” on Alps. Adams has even gone as far as describing Bridgers as a “musical unicorn” and comparing her to Bob Dylan. “I feel like part of the reason I met them was because I was such a big fan,” she says, “and people knew I’d want to be introduced to them.” And now that she has their support, she smiles wide when talking about it. “It feels great when it’s someone you really believe in,” she says, before adding, “but I’m working on not needing validation from other people.”

From Scott Avenue, Bridgers takes me to the Silver Lake Reservoir, which pops up on “Smoke Signals,” the album’s opening track and Bridgers’s biggest source of pride. With its references to the deaths of Lemmy Kilmister and David Bowie, it was one of the last songs written for Stranger in the Alps, and most indicative of the growth she’s experienced as a songwriter.

“It’s the saddest little excuse for nature,” she says about the reservoir as we stroll through its fenced-in and nearly abandoned meadow at sunset. “It feels pretty safe, though. It’s a place where I could walk around and clear my head. I feel like someone is always taking that walk around the reservoir. It’s the same reason I go to CVS when I’m lonely, because someone else is always there, alone.”

Stranger in the Alps functions in the same way, a document of loneliness in which others can feel solidarity. “I don’t wanna be alone anymore,” she sings over gentle guitar plucks on “Demi Moore,” condensing her recurring theme down to a single line. For Bridgers, she cites Julien Baker’s last record as providing that comfort for her, and if her own music can connect with people in a similar way, then that’s a victory. “She said that she never expected these songs to reach such a wide audience and it’s so crazy that she wrote them to feel so personal,” Bridgers says of Baker. “I’m feeling that way now, too.”

But the ability to make the personal universal is one of Bridgers greatest assets, and she knows it. She keeps notes filled with details for future songs, and has a blackboard in her apartment covered with potential lyrics and song titles. She’s already hard at work on the music for her next record, too. “Nobody expects a specific thing from me yet,” she says. “Nobody knows what my first record sounds like, so nobody knows what my second record is going to sound like. There’s no pulling me in different directions because the label doesn’t even know what works and doesn’t work about my album. It feels like I’m riding on the tail-end of that freedom.” For someone that has trouble with direction, Bridgers knows the most important movement is forward.