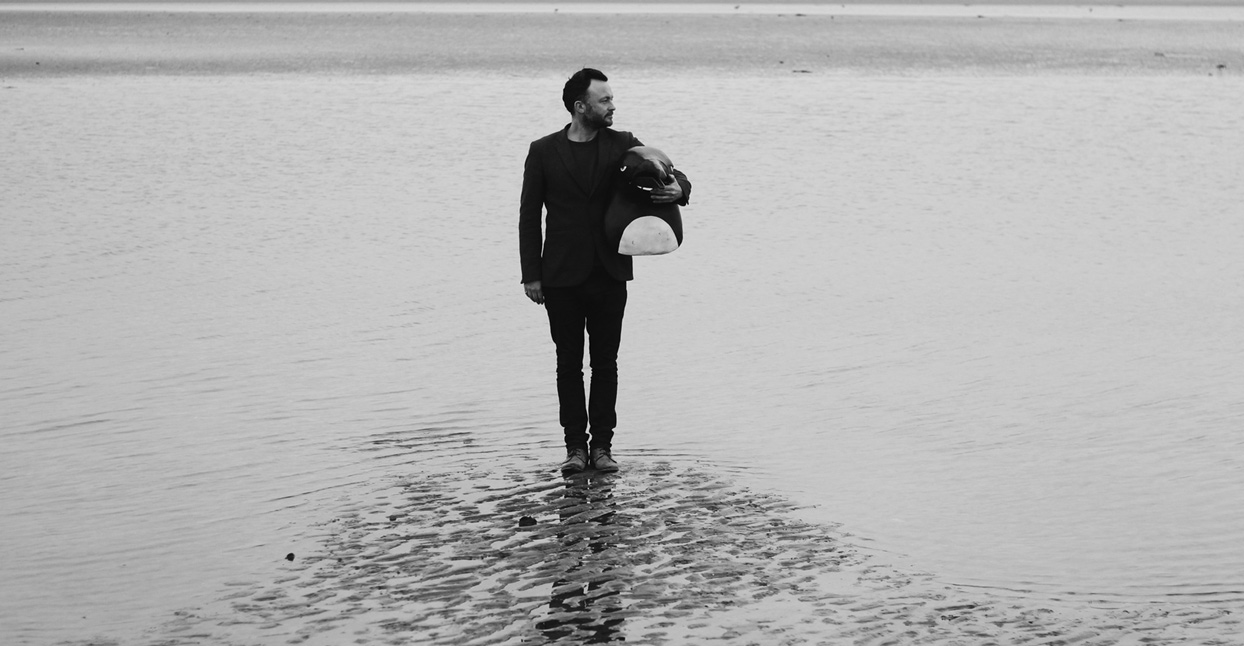 Few bands have been as difficult to categorize as England’s Penguin Café Orchestra. Their songs traversed folk, minimalist classical, and various indigenous styles, particularly from Africa, and showcased a delicate group interplay, the loose edges of which made the music feel even more human and vital. Founded in 1972 by composer and multi-instrumentalist Simon Jeffes and cellist Helen Liebmann, PCO were marked by shifting membership and instantly ingratiating tunes.

When Jeffes died of a brain tumor in 1997, that seemed to be the last of the Orchestra—and, strictly speaking, it was. But 10 years ago, Jeffes’s son Arthur reconvened some of his father’s old compatriots for a trio of memorial shows in London, then began a new group under the name Penguin Café, minus the Orchestra, to showcase both Simon’s classics and his own new tunes. The group self-released A Matter of Life… (2011) and The Red Book (2014), but their new album, The Imperfect Sea, comes out through the sharp-eared British experimental label Erased Tapes. (The album was one of Bandcamp’s Essential Releases the week it was released.) Broader-stroked and more sonorous of tone than his father’s work, The Imperfect Sea is nevertheless a frequently gorgeous successor to the Orchestra’s poky beauty. We caught up with the 38-year-old Arthur Jeffes, who was in the midst of a house renovation in Kentish Town.

I’ve long had the idea that with the Penguin Café Orchestra, the lineup wasn’t always fixed.

That’s true. Certainly, in my dad’s day, there was a fairly steady turnover, as people moved on and moved away. So people came and went. But I think since I started up again, people have come but nobody’s really left. So the band’s getting bigger.

When did you restart it?

I did some concerts with my dad’s musicians to mark 10 years since he died, and that was 10 years ago this year. That was when it all started. I’d never done live music onstage before, and it was incredibly moving and really lovely to hear my dad’s music, which I had grown up with, being played in a big concert venue again. I did want to carry on with my dad’s musicians. I do think a lot of the detail and nuance in my dad’s music has to do with what you do and don’t do. So you need sort of a benign dictator with a vision. You can’t really do it by committee, and I didn’t feel I had the authority to tell these much more experienced musicians what to do.

And that didn’t carry on, but that seed had been planted. And, quite organically, the next year, 2008-2009, I started playing a few of my dad’s tunes with a few friends. I started off with maybe three musicians: bass, violin, and another piano-slash-guitarist. It’s one of these ideas that creeps us from behind you. It wasn’t in the plan, but the summer of 2009 it got enough momentum. We played Glastonbury and Bestival. We had fun at those festivals, and it was the kind of thing that comes and swoops you along almost before we’d made it. It was rather lovely.

One of the things that is most affecting about both your father’s music and the new album is that there is something really touching about hearing that interaction and that kind of playing style. I love electronic music, but there’s something very delicate about the Penguin Café: the music is very strong, but it has a fragile feeling that gets to you.

Good. Yeah, that’s kind of the conceit, to use real instruments to explore some of the territory that’s been opened up by electronic music over the last 30, 40 years. By doing that, there’s almost a predictable reliability, which in theory isn’t there when you’re playing with live musicians. There’s a potential precariousness.

One of the things that I think is very unique about this, compared to your father’s stuff, is that it feels a little more drone-based to me.

That was due to these experiments we were doing, putting rocks inside the pianos. We were balancing different shape and sized rocks. I’ve collected rocks from most places I’ve been, so I have a studio full of them. We were balancing them directly on the frame of a grand piano. I was feeding that into a Fender amp and then pointing that back into the piano, so that once you put your foot onto the sustain pedal, you get resonant feedback, depending on the size of the rock, in a particular key. It inspired drones in the other songs.

Is that where the subtitle of ‘Now Nothing (Rock Music)’ comes from?

The compositions seem a little bit broader and less miniature than your father’s. It’s a bit more densely muscled a sound, maybe.

I was aware that that was where I wanted to go. To be honest, after we did the second album, The Red Book, we had a conversation: ‘We’ve got to a point now where we either need to move forward or just go, well, this is really great, but I think we can stop now.’ I think it helped me: If we are going to do it, then it has to take a step in a new direction, just to keep it breathing. I wanted to make it more muscular and probably a little bit more filmic—certainly with the big string tracks. And while my dad did do [that] a couple of times, one of the big differences between mine and his compositional approach is that I will probably jump in with both feet slightly more readily to that broader, more accessible, and direct thing. My dad was very circumspect, I think, when it came to drawing a musical idea. And perhaps I’m slightly more galumphing. [Laughs]

Where did your interest in electronic music begin?

When I was 11, 12, 13, and starting to listen to dance music, my dad was using MIDI software to do parts—basically making additional composing easier. There was an 8-bit sampler, which he loved. I came at it from almost the other direction, looking at loops and sampling—that grainy early ’90s dance-music thing. Then, I gradually came out and said I basically agreed with my dad on most things.

Your father’s music has made its way into a lot of places you wouldn’t necessarily expect it.

Avicii did a cover of “Perpetuum Mobile.” [Chuckles] It’s extraordinary. He just takes the tune and puts it to a four-on-the-floor. Well, I suppose you could do that. And a lot of people really love that.

I don’t really have anything against it—it’s a cheerfully-raised eyebrow. But yeah, there’s a lot of other stuff. The first Café Del Mar compilation was a real line in the sand—[it] had ‘Music for a Found Harmonium’ on it. That was the first time I was aware of Penguin being cool in the way that Ibiza is cool, in that ‘sunglasses, ciao’ [way]. [Laughs] He thought it was really funny. Because Penguin Café isn’t that—it’s not cool dudes being cool. So I think it was really good fun for my dad, and certainly now for me it’s really a joyful meeting between two quite different worlds.

It must be tricky, on the one hand, to be true to yourself as a composer while at the same time working in your father’s tradition—as well as being judged by your father’s fans.

Yeah. That’s it. We’re aware of it, definitely, and with this album there were four or five tracks where we actually had the conversation, ‘Is this going too far away from the traditional audience? Are we going to alienate people by putting four-on-the-floor, in effect?’ Certainly, with ‘Wheels Within Wheels,’ and ‘Rescue,’ tracks 7 and 9, I was constantly thinking to myself, ‘Well, yes, it is different.’ But I don’t think anyone would begrudge us exploring a new thing, especially since we have a yes/no green light/red light thing going: Does that work? Can we do that? Well there’s four-on-the-floor, but yes, it’s cool. That certainly meets all the criteria.

I think it’s an instinctive answer, even if the question is kind of intellectual. I had to stand my ground with the band with both of those tracks. When we were we were doing our parts in one rehearsal and then getting it ready for live [performances], [Penguin member] Kevin was saying it was too long and not enough happens. And I was like, ‘No, it’s fine. That kind of progression is what it’s all about; we go round again, we go round again.’ ‘Cantorum’ started out with a different right-hand piano line, sort of syncopated. There’s a particular thing my dad used to do—3/4 against 4/4, you syncopate it and it gives you this cool little thing. So when it came to the point of taking that out and giving the rest of the tune that feel, to then put it into the five or seven note, repeated melody, that changed it completely. It gave you a sense of urgency, which wasn’t there before.

How did you hook up with Erased Tapes?

Last July we did a concert: [Erased Tapes artist] Nils Frahm was curating a weekend at the Barbican called Possibly Colliding. The idea was that you had very different bands [play together]—so before us on the night we played we had Anna von Hausswolff. She’s amazing; it’s like goth-core folk, but really heavy metal. They were driving the whole sound system at the Barbican that 10 percent further than it can be driven. It was really mental. That’s not our vibe at all.

It was nice to hang with Nils and Felix, his manager, as well, and that’s when I first met Robert [Raths, Erased Tapes founder] that weekend. We also met up with Todd Walker, who represents Nils in America. We really got on. We’d done the previous two albums on our own imprint and this album felt like a different proposition. Robert has an infectious enthusiasm, and we were like, ‘Oh, he’s right.’

Where did you record The Imperfect Sea?

It was a mixture of places. Until September 2015, I lived in an old church hall in North West London, farther west from where I am now. It was a pretty beautiful, big decommissioned church. That’s where I did a lot of the strings, where I did a lot of the multiple-people-playing-at-the-same-time sessions, because it is a different space. Also, one of the floorboards in the kitchen was tremendously resonant. Hackney, where I’ve just been for 12 months, is where we put all the finishing touches.

My mum lives in Italy. She’s in this amazing monastery in Tuscany, so I was there two months at the end of summer, just doing the mixing and a little bit of overdubs. Mostly just tweaking. And we mixed and mastered it. We took my studio, inasmuch as it’s the speakers, the interface, and my computers, took them to [British engineer] Mandy Parnell’s studio, and did three days of pre-mix-mastering, running the whole thing on multi-track through her system, and using her ears from a mastering perspective to get to get the mixes right.

Are you touring behind the album?

We’ve just done two quite small gigs here in the UK. The first half of the gig we just played the album, all nine tracks. Then we played a few older ones, to please the older [fans]. [Laughs] We’re going off to America—we’ve got this cool parallel project with Princeton University where, at the music department, a guy called Simon Maurice asked me to rework an old Cole Porter ballet that hasn’t been played for 70 years. That’s really good fun.