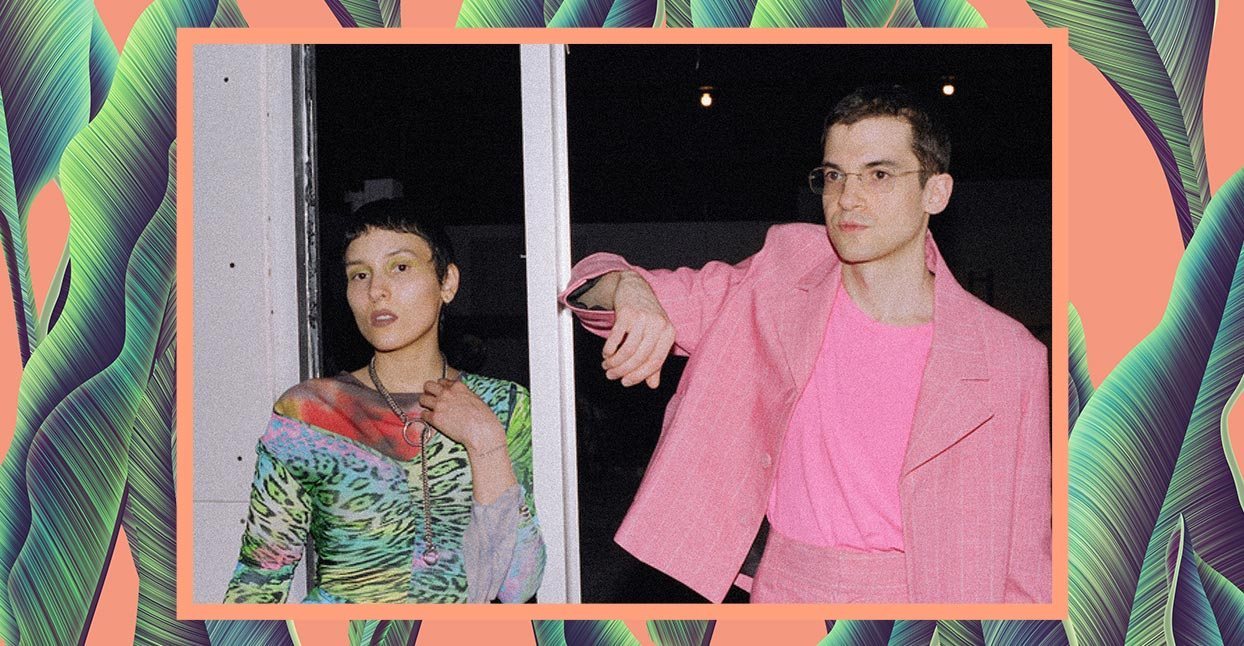 Montreal electronic duo Pelada don’t do a whole lot of social media. Though producer Tobias Rochman maintains a politically motivated Twitter presence, vocalist Chris Vargas is off every platform entirely. The group has a marvelously scant internet presence, essentially limited to Pelada’s Bandcamp profile—it’s just enough so that fans can pre-order their new album, Movimiento Para Cambio. All of this serves to underscore the band’s rejection of the hyper-superficial, occasionally sinister connectivity of our modern world. “It just seems like we need to grab attention now and try to change the narrative and the dialogue around [things],” says Rochman.

Perhaps what matters most is Pelada’s raucous live experience. Their tornado of house beats and Vargas’s urgent, bellowing Spanish-language vocals creates a sense that each conversation could be our last, so we had better get to the damn point already.

Vargas and Rochman first met while they were both working at the same clothing store. At first, they didn’t like each other. “We were sort of like oil and water,” remembers Rochman. That changed a few years later, when Rochman’s solo project shared a lineup with Vargas’s industrial band, Pelvic Floor. “We were adversaries, but then we teamed up, I guess,” Rochman says. “We’re both strong-willed individuals. We don’t like to take shit from people and don’t really like to be told what to do. It’s better if we’re on the same side.”

Their first show was at the debut edition of Canada’s Slut Island Festival in 2014. It was primarily an experiment. Though Vargas, who uses they/them pronouns and whose family is from Cali, Colombia, had been in bands before, Pelada marked the first time they sang entirely in Spanish. In a video of that urgent first performance, the energy from Vargas’s assured stage presence spreads to the crowd during a riff-heavy, punkily distorted song named “Ahora”—even though the average Vancouverite may not have been able to understand what they were saying. (“‘Ahora’ means ‘now,’” Vargas clarified afterwards to the audience.)

Both Vargas and Rochman have roots in punk rock, which is obvious in their on-the-fly approach to touring. Pelada show up almost unexpectedly—easy to do, given their lack of a web presence with which to flog their upcoming tour dates—in medium- to small-sized towns. They blow the audience’s minds and then take off for the next gig, building an enthusiastic fanbase as they go. They’ll play unlikely cities multiple times in an album cycle—like when they hit up Phoenix, Arizona twice in four months. “I don’t know who, outside of Black Flag, has done that,” jokes Rochman.

In contrast to their fellow Montrealer Marie Davidson, who recently announced her intention to retire from club shows entirely, Pelada once played 23 shows in three weeks during the European tour that followed the release of their well-received 2016 EP No Hay/Ten Cuidado. “Touring like that is almost a dying art,” Vargas muses. “But that’s our punk background too, just reaching out to communities and being present and showing what we’ve got.”

Movimiento Para Cambio is a showcase for the ways Rochman and Vargas deftly combine percussive house and techno catharsis with pointed social rage. On lead single “Ajetreo,” flickering digital synths recall the fluttering lights of an ancient computer, while its lyrics recall Italian conceptual artist Danilo Correale’s work on how taking time to rest can be its own form of rebellion. “Perra” is a song of self-reliance, Rochman lightly tapping out a reggaeton-ish beat on of the album’s more overt flirtations with Latin pop. On “A Mí Me Juzgan Por Ser Mujer” (“They Judge Me For Being A Woman”), Vargas invokes their ancestors for strength in confronting society’s narrow view of gender roles, their rough-hewn verses connected to Rochman’s chords by intervening, riotous hi-hats.

Elsewhere, the band explore other combinations of music and message, pairing a vast range of instrumentation with big, scary thoughts about where the world is headed. On “Asegura,” distorted gabber kicks buckle beneath lyrics that express the same concerns over Big Data raised by Shoshana Zuboff’s The Age of Surveillance Capitalism. (Rochman cops to playing the song some 10 BPMs faster in the live setting, sometimes leaving Vargas out-of-breath when they scream, “No eres un producto”—“You are not a product.”) In this context, Pelada’s absence from social media makes principled and practical sense. Album closer “Aquí” is a direct cry on behalf of our damaged earth—and also an affirmation of the planet’s supremacy over us. The album’s lyrics, strung out over Rochman’s ruminative techno, aim to create a kind of political awareness on the dancefloor. “I hope that it stimulates conversation within a person’s heart, and then in a group, and hopefully we all take better action to take care of this planet that we live on that is kicking us out,” says Vargas.

The relatively straightforward dance music of Movimiento Para Cambio is a marked difference from Pelada’s more experimental labelmates on the Berlin label PAN. But when the label’s founder Bill Kouligas caught Pelada two years ago at the New York City party Nothing Changes, he identified them immediately as the kind of unique artist in which the label invests. “I was hooked on them right away,” he says. “They sort of reminded me of a contemporary and upfront, banging version of Diseño Corbusier. Tobias’s flexibility to jump from different beat ranges and styles, together with Chris’s expressive vocal narrative somehow makes it sound unlike anything else.”

The band is determined to channel that talent towards change. “I think that within activism, it’s kind of always about starting with where you are, with what you have,” says Rochman. “So if you find yourself on a stage with a microphone or a synthesizer, just start there.”