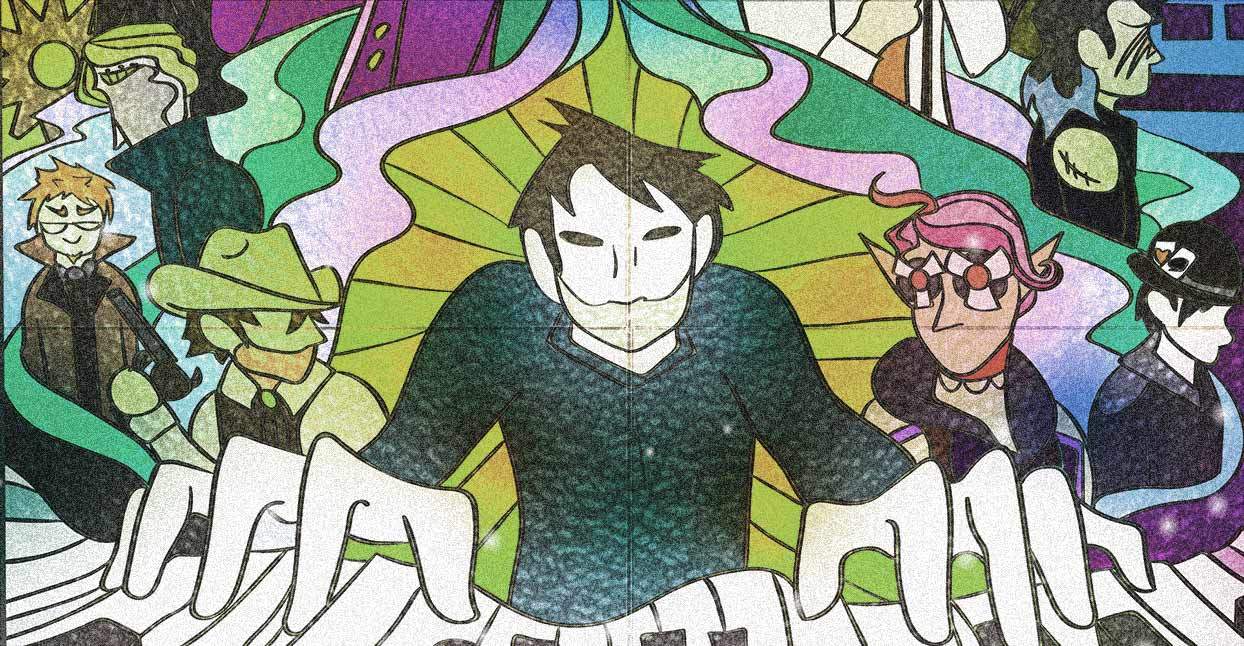 Paul Shapera’s joy when discussing his eccentric work is, in a word, inspiring. The New York composer might be severely jetlagged and dead tired when we speak with him on the phone—and yet, the enthusiasm with which he discusses his large discography of fantasy/sci-fi concept albums makes you think he’s just woken up. “I used to make these albums for nobody, so I am extremely delighted to even have any sort of audience and talk about it,” he says, stretching out the vowels of every other word.

Shapera certainly has plenty to be proud of. He’s written an entire musical about the Internet-age supernatural character Slenderman, released a Lovecraft-inspired funk album called Cthulhu: The Funksical, and created a steampunk opera that’s been performed by various theater troupes around the world. His most recent project is a trilogy of fairy tales set in cyberpunk, biopunk, and fairypunk (yes, you read that correctly) futures of his own design.

Shapera grew up on a media diet of Pink Floyd’s The Wall, Jesus Christ Superstar, musical theater concept albums, and lots of books. As the son of a librarian, his mother brought stacks of new titles every day, introducing Shapera to hundreds of different stories, worlds, and characters. “It’s the best thing my mom ever gave, a love of reading because you can never be bored,” he says. “I’ve always got something to read at all times.”

Not long after picking up an instrument, Shapera started writing about fantastical worlds, admittedly for no one but himself. After a few years, he tried his hand at more conventional songwriting, but his real calling never truly left him.“One day I just realized that even though no one was listening, I love making musical stories, so that’s what I’m going to do,” he says. “And after I realized that, the next thing I made was The Dolls of New Albion, A Steampunk Opera and it just hit. Overnight, I gained an audience.”

The process of building an entire world and crafting an enticing story surrounding it begins with the act of listening. “Before I even start writing, I start listening to stuff, but I’m not putting anything down yet,” Shapera explains. “I deep dive into a certain genre. Like for The Lost Fairy, I spent a month listening only to instrumental trap so that I could learn the genre. So for something like steampunk, I take these little sound ideas and let them swirl around in my head. Then when I start dividing things into songs, that’s when I start thinking about the instrumentation, so for steampunk that might an accordion, a tuba, little grindy percussion instruments.”

After the sounds have been sitting in the back of Shapera’s brain for a while, he picks a “genre” that he wants to explore and starts crafting imagery to match it (for instance, airships if it’s a steampunk album). Then, it’s the music and the lyrical narrative, where Shapera separates the fable into songs. “They’re pulp operas, so I want to have these dramatic moments where I can put characters in high drama situations in a short song,” he says.

After that comes Shapera’s favorite part: writing the music. Layer by layer, instrument by instrument, he builds the musical foundation for his wondrous worlds, almost entirely alone, with a variety of digital instrument packs which he plays using a MIDI keyboard. As the projects become more complex, he begins assembling a small team of session musicians including a guitarist, a group of singers, and in the case of The Broken Cyborg, a jazz flutist. And although he loves the help, he remains adamant that he’ll always be the one doing a majority of playing on his albums.

For his latest trilogy, all of which takes place in his de facto homeworld of New Albion—an ancient place seemingly always in chaos first referenced in The Dolls of New Albion, a Steampunk Opera, and host for many releases since—Shapera explores the fairy tale, first with The Forgotten Meme, a cyberpunk adventure about a bygone meme manifesting itself into a robotic insect-like creature, then with The Broken Cyborg, an emotional biopunk tale; and finally with The Lost Fairy, a record festooned with Ceasar-Ciphered track names and possibly one of the first post-biopunk pieces of music ever made.

“The Steampunk Opera took place in the fictional city of New Albion,” Shapera explains. “So I continued to chronicle that city. There have been these albums that have chronicled about 160 years of this city. So by the time I had gotten to this trilogy, I had done dieselpunk, atompunk, so then I was at cyberpunk, after cyberpunk was biopunk, and after biopunk there’s sort of no ‘punks left,’ but I had a clear idea of where the story was going, so I just made up fairypunk because they’ve been featured pretty heavily in my work before. The music is made up to sound modern, which is why I researched instrumental trap.”

With the trilogy complete, Shapera looks forward to temporarily taking a vacation from New Albion for a short while. And though he hasn’t ironed out the details or even confirmed that it’s happening, he gleefully mentioned on his blog about his desire to make a historical record (or two), one centered around the Donner Party, a group of American pioneers who, faced with countless setbacks and trapped in a wretched snowstorm, turned to cannibalism to survive.

With no plans completely set, though, Shapera is, for the first time since the fairypunk trilogy began, unbound and free to explore any sci-fi, fantasy, or historical topics of his choosing. And given his lifelong love of storytelling and grandiose concept pieces, he has more ideas than he can discuss. However, he admits that even if he lost all of his fans, he’d still be writing stranger than life records just for himself. He has no intention of stopping.