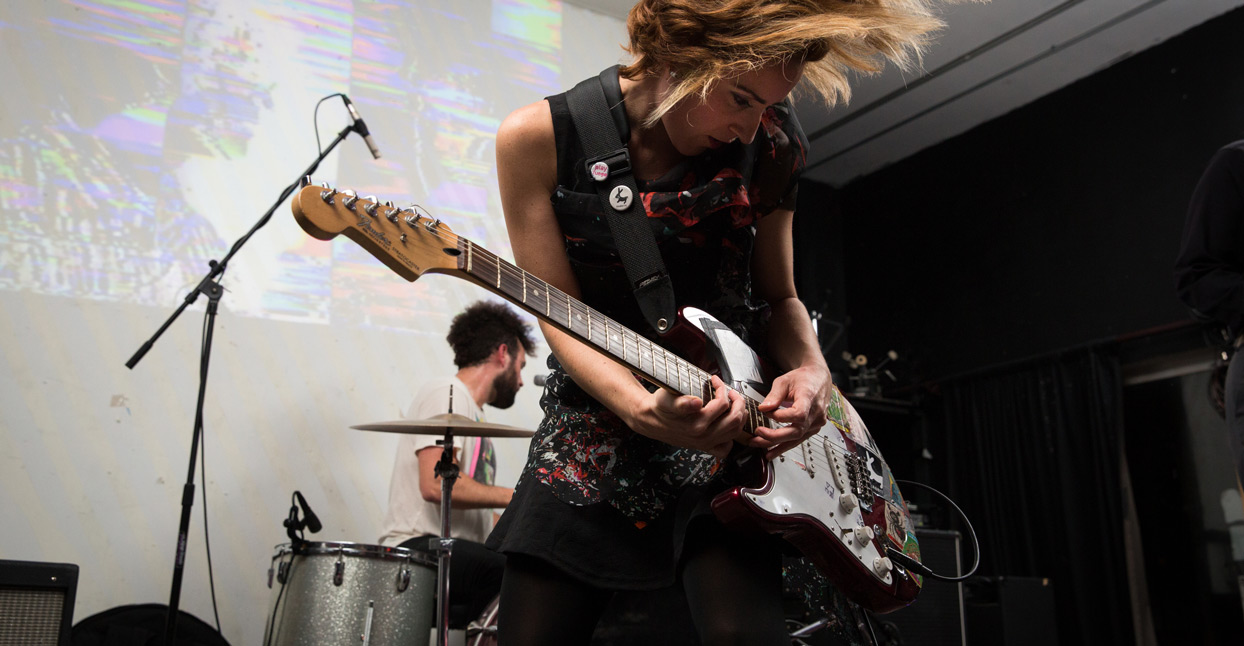 Brooklyn trio Parlor Walls burble with an agitated energy. Their songs lurch from movement to movement, but not without grace; a rumbling, thrumming, rhythmic section cedes to a no-wave freakout, which barrels forward full-force only to shatter into glassy post-punk shards. Guitarist Alyse Lamb’s clear, sweet vocals circle the discord with enough pop melody to lure the listener in; beneath, there are layers of uncertainty in her guitar lines, in Chris Mulligan’s spitfire drumming, in Kate Mohanty’s saxophone, which soars as much as it needles.

Given all of the urgency in their music, it is perhaps no surprise that they’ve been remarkably productive as a group; in roughly two years they’ve put out two EPs and now their first LP, Opposites, which demands more of its listener than one might expect at first blush. Lamb’s lyrics are not didactic chants but open-ended questions; one can listen to tracks like “Birthday” and “Cover Me” and find new things to marvel at on each listen.

We spoke with Parlor Walls about constant distress (in their music, in the world at large), the power of improvisation and collaboration, and one of the worst questions to ever ask anyone who makes music.

Tell me about the process of bringing your first LP to life.

Alyse Lamb: Well, going back further—Parlor Walls began as me and Chris making some noise together and writing some songs. We saw Kate play a solo saxophone set together, which was so exhilarating and glorious.

Lamb: That was maybe two years ago, a year and a half ago?

Mohanty: Over two years ago, now!

Lamb: Yeah! And we were playing shows here and there. We were excited to become what we are now. We were just writing a lot in Brooklyn and getting our shit together.

Mulligan: Half of the album, I’d say, is songs we’ve been playing together for a little while, and half of it are ones—we were upstate [at Birdwatcher Studio in Big Indian, NY, run by Northern Spy Records], we got out of the city for a couple of weekends, to clear our heads and record, so we wrote a lot while we were there, which kind of contrasted with what we’d been doing in the city. So it’s kind of a two-sided piece.

Lamb: It was quite the contrast. Writing in the city, where everything’s chaotic and everything’s ‘go-go-go,’ and going up there, being able to kind of think into the cracks a bit and really expand and just let our minds go. It’s all very good.

It’s cool that you wrote a significant part of this record on the fly.

Lamb: One of the songs on there, “Carstairs,” we didn’t even write that. We just set up mics, and that’s basically an improvisation. We haven’t even listened to it, even. We wanted a surprise, so when we get the vinyl in we’re all going to take a listen to it together. It’s pretty exciting.

That makes a whole lot of sense! There’s a very palpable energy to this record, and when you’re recording everything live and writing live, that naturally comes through.

I can definitely relate.

Mohanty: Neurotic people are the only people that get anything done. [all laugh]

Lamb: You should go upstate for a couple weeks and you’ll write an album too!

I know, Alyse, you also play in Eula—how different is this process from the process you have for Eula?

Lamb: Most music from Eula came from this sort of singular place in my brain. I wrote the songs, and I demo-ed them out. It was one cohesive piece, kind of from my own brain, and my own visions, and my own mood—things I was working out for myself. This was a whole different animal, bringing in this new energy to create this new beast. I do write all the lyrics, but a lot of the songs are based off of improvisations we’ll do, or someone will bring in something and we’ll play off of it and build it, and it’ll become a nice cohesive thing.

That’s how every band I’ve been in has been—extremely collaborative.

Lamb: It’s so crazy. It feels like a totally different part of my brain working—the collaborative, improvisational part. That muscle is getting exercised. Sometimes when you’re in your own head for too long, writing your own things, it gets a little dicey. This is opening up, bringing in new textures.

There is a lot of texture on the record—that’s actually something I wanted to talk to you about. Were there any specific production techniques you used, any ideas you went into the recording process with about how you wanted the record to sound?

Lamb: It depends on the song, really. We didn’t have a set thing that we did for every song. We wanted each song to stand on its own sonically and production-wise. Whatever works best for that particular song, we went with.

Chris Mulligan: We didn’t have a ton of time to record, so we just set up everything and started playing. We did a lot more of that in post, when we were mixing. We would try to add a little texture here and there. A lot of it’s just how it came out, though, I think.

Were there any themes you found kept coming up while you were writing for this record?

Lamb: I would say distress. A lot of distress at what is going on in this world. That’s what I’m most passionate about—when someone’s in distress, or I’m in distress, I have to channel it into some sort of art. I don’t want it to come off as this distressing, dark, really sad record, but that’s one of the themes. And that could be taken as something bad or something good—because something good can always come out of a distressing situation, how you deal with it and how you grow from it.

I prefer sadder, darker music, and that’s the music that I write and also end up being drawn to, but not because I want to get stuck in it—that’s just where I naturally go as a person. The music helps me work out those impulses instead of being mired in them.

Lamb: Yeah. It’s super cathartic, and [as a listener] it’s like you’re working it with [the musicians you’re listening to]. And it’s also good—what I personally like to do sometimes is spin things on their head a little bit. For instance, on “Birthday,” what is the epitome of beauty? What is perfection? It’s a distressing thing to think about. But it became kind of an anthem. ‘Don’t you know I’m perfect?’ It kind of spins it in a positive way.

Do you feel a tension between the necessity of creating and the feeling that you should be doing something ‘more,’ as many artists are articulating right now?

Lamb: I’ve had this discussion a lot of times. I’ve been going to certain groups to talk about this exact thing. One larger group, called Artists Rising, we kind of brainstorm how we can make a difference and help out during this time—what artists can do, how artists [not directly affected] can put their creativity and passion toward those in need right now. And, on a more intimate scale, just last week I attended this group, and we wrote postcards to our senators and other various people, and we just basically talked. We were all from different cultural backgrounds, and there were maybe 15 of us. Literally talking it out, it feels a lot better, just brainstorming what we can do as artists. You feel like you can’t do much, but you can do a lot to help. It’s good to focus on that.

Mulligan: [Making art] can feel a little selfish at times, but it does give you a louder voice in the end. You can’t deny that.

Lamb: We’ve been playing fundraiser shows. Our single, all of the proceeds are being donated to Planned Parenthood. If you can’t help with your time, you [might be able to] help monetarily, so we’re doing that too.

Making music definitely does give you a platform from which to speak.

Lamb: We each process things in different ways. For me, I write. Writing helps me personally, and performing—it’s very cathartic. And bringing people together is a good thing.

One thing I really like about this record is that there are a lot of lyrical questions on it and a lot of open-ended ideas, rather than didactic statements.

Lamb: Yeah. I want to make you think! It’s reflective, for sure. I like listening to that kind of music, where they kind of pummel you with statements, and it’s very concrete and particular. I love that kind of music. But me, personally, I like to be a little more abstract with things like that, and letting the listener navigate through it makes them feel, and makes them ask themselves the questions.

How do you feel like that translates in a live setting? Is there a different dynamic when you’re playing these songs live? Not necessarily between you guys, but in the energy that you get from the audience?

Lamb: Yeah. We really like to enjoy it up there on stage. I know Kate, for instance, always plays something different, and we love that. Because she’ll throw us a curveball while we’re playing. Or I’ll throw in some different chords, or sometimes Chris will completely drop out, and I’ll have to be like ‘Oh, fuck, okay! I’ll do this, then.’ It’s really exciting. I really love that.

Mohanty: i studied a lot of jazz when I was younger, in college. I find jazz kind of restricting, because you have to follow chord changes so closely. So I started to do more free improvisation when I came to New York. Most of what I do these days is improvisation—I like coming up with things on the spot. I play solo saxophone sets that are completely improvised every time; that’s what I’m most comfortable doing. I can read music as well, but I like improvising a lot. I know all of the songs really well, but I always like to play something different, to keep it new. I find that when bands play things the same way every time, it’s a little stale. Chris and Alyse lay down a foundation, which is nice, because then I can do whatever. I play totally different stuff sometimes [from the recorded material]. It changes a lot.

Mulligan: One of our last shows, I noticed my friend on the side of the stage playing air drums. Watching him do that while I was drumming was one of my favorite live experiences ever… It’s so reaffirming and reassuring.

Mohanty: People always ask me what we sound like and I’m like ‘Ugh, listen to it. It’s exhausting right now.’

Mulligan: I always just describe it as the instrumentation of the band. ‘Well, there’s saxophone, drums, keyboard, guitar…’

‘What do you sound like?’ is truly the world’s worst question. Or the description of any band that doesn’t fit neatly into a formulaic subgenre as ‘genre-defying.’ It can just be a band. If the band isn’t engaging with genre, you don’t have to use that framework to describe it.

Mohanty: It can just be music.

Lamb: I would prefer a color grid, where the combination of colors you associate with a band or a mood is the way you describe it.

So what are the colors you would use to describe Parlor Walls?

Mulligan: I was about to ask [Alyse] that too!