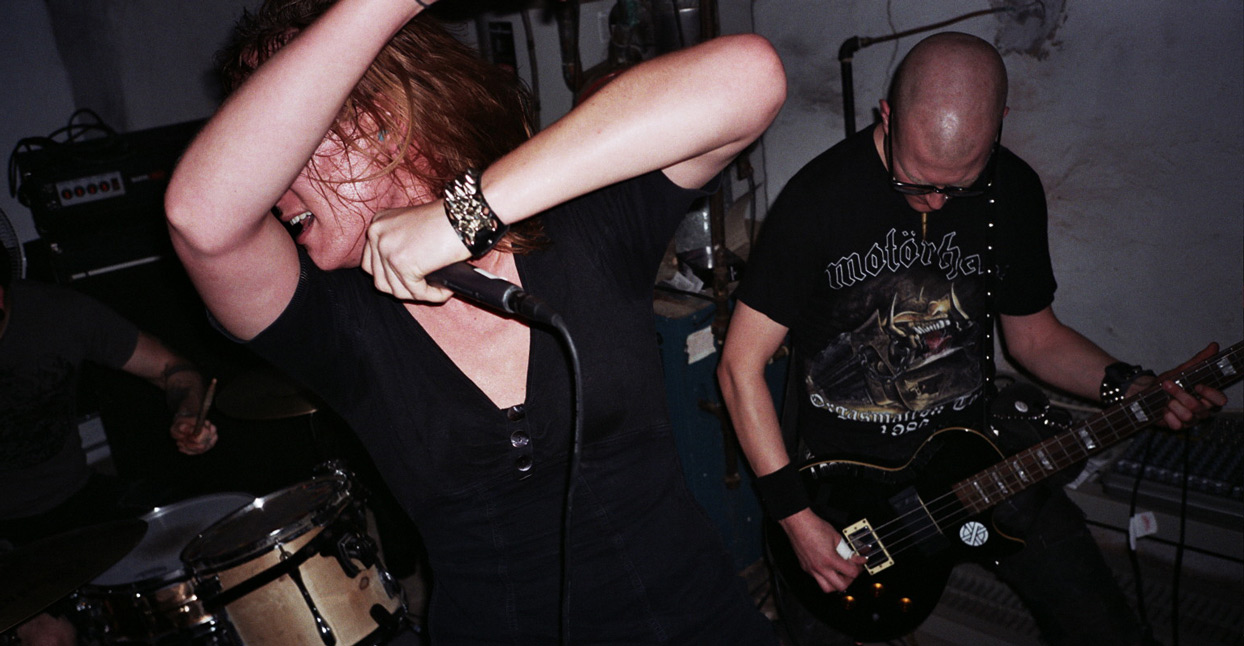 Pandemix is a punk band from Boston, Massachusetts. Granted, punk is a broad term—it encapsulates a myriad of subgenres: hardcore, peace punk, Oi!, crust, and so on—but Pandemix manage to seamlessly pick and choose from decades of cultural and artistic detritus to create something unique and engaging, though clearly rooted in the familiar. They employ the poetic politics and bounce of many Crass Records bands, the catchiness of ’77 style punk, and the aggression of hardcore.

Their first full-length, Scale Models of Atrocities, released by Boss Tuneage Records, expands on the work Pandemix did on their 2016 demo. The band manage to ramp up both the aggression and catchiness by delivering memorable riffs that still have teeth. Old songs like the tense, building “Total Immersion” or the dark, stomping “Faultless” are given a fresh polish and new context when sequenced with more ambitious numbers like “A Wall” and total rippers like “The Pornography of Hope.” It’s the best kind of musical progression—a band that takes a step forward creatively while still sounding distinctly like themselves.

The lyrics, thoughtful and poignant, are delivered with precision and palpable frustration by vocalist Shannon Thompson, who’s been around the New England scene for years in bands like the alt-country-influenced Long Gone and who runs Nervous Nelly Records with her partner. We spoke with Thompson about avoiding punk conventions, the pitfalls and necessities of identity, and navigating this complex world full of interlaced power dynamics.

What was the impetus to start Pandemix? From an outside perspective, it feels like a band that was thought through and had a vision in mind from the jump.

I was the last person in, so maybe I’m the wrong Pandemic to ask. When [band member] Ryan coyly asked if I ‘know anyone who would want to sing in this kinda band,’ there were demos of what would become ‘Faultless’ and ‘Total Immersion’ without vocals. I would say that we have a good balance of working methodically and working quickly: we had lyric posters for our first show, which was less than three months after our first practice.

The releases so far have a cohesive, distinct aesthetic to the artwork. You’ve done all of it, right? How do those two aspects of creating in this band play off one another?

Tom did the cover of both versions of the demo, and Matthew designed a shirt and a tour tape, but everything else so far has been my work. Loss of identity, loss of ability to individuate your distinct self from the chaos of human experience, is a huge theme throughout the band. I think that naturally finds expression through a lot of the artwork; with the band and in my personal work, I tend to want to fuck with my subjects’ faces and other identifying features. One of the reactions that I most strive for is to evoke an underlying feeling of ‘wrongness’—images that may be creepy or menacing while doing their best to avoid lazy tropes like blown-out portrayals of violence or war atrocities.

A lot of the art and lyrics make subtle reference to older peace punk/anarcho punk bands and aesthetics, but still maintain their own singular vibe and personality. Is it difficult to walk that line when creating new material?

I guess this question applies to any punk band; you start with the general template of a style that existed before you were born, and hold your abilities in high-enough regard to think you can beat something new out of the dead horse. Whether you can is in the eye of the beholder. I’ll say that if I had a checklist of points that I needed to regurgitate so that our records would be lock-step with [Subhumans’] The Day The Country Died and [Crass’] Feeding of the 5000, it wouldn’t be exciting to me. It wouldn’t feel like something worth doing. The most exciting creative moments are when you hash out an idea you’re not sure you can do, be it the limits of technical ability or the desire to pander to the listener’s comfort. There were a few of those moments when we were writing this new record.

This is the first band in a while that you’ve done stand-alone vocals for, and it’s certainly the most active of the bands you’ve sung in. How do you approach this band differently from past bands if at all?

I transitioned in 2014, and the last time I fronted a band was 2012. My vocal approach is pretty wildly different now. Probably the first three to four weeks that I was practicing with the boys consisted of me figuring out how to do vocals in a way that I was comfortable with. I enunciate a lot more now; I place a lot more value on being understood, vocally and lyrically. The writing process varies from song to song—Ryan and Tom, I think, wrote the first two songs, and there have been two or three songs whose first drafts have been written with me on drums. One member went camping with his four-track for three days to finish writing the LP. Both interludes, ‘A Wall’ and ‘Never Believed,’ germinated while I was heading to work. The process may vary, but all that matters is that the results have that Pandemix stank.

Pandemix is staunchly and thoughtfully political in a way that I don’t think is necessarily popular or common in hardcore punk currently. What made you want to take this thematic path?

When I was first trying to put pen to paper for this band, I was kind of guided by a quote from Chris Kraus’s [novel] Aliens & Anorexia. She’s talking about a Naipaul book that proclaims that ‘the greatest writing is a disturbing vision offered from a position of strength.’ She says that this very idea is what she dislikes about ‘Great Male Writing,’ and likens it to bragging about never letting a woman see you naked without an erection. For much of the band’s material, the lyrics are a conscious exercise in vulnerability and an exploration of my personally-held fears. I took this track because I felt like it was both a distinctly feminine position, and somewhat unusual for a hardcore band.

The lyrics spring from my orientation to the world, and that only becomes politicized because I think about power, commodification, violence, and exploitation a lot. I’d argue that we only have one song, ‘Total Immersion,’ that says ‘here’s an issue and here’s what you should think about it.’ Even the two songs on the album that were written after the election, ‘Exit Strategy’ and ‘The Pornography of Hope’ are about struggling to understand the world. ‘An anguished cry, beyond interpretation’—the collective grief on November 9th transcended the political, in that it was the despair of people fearing for their lives.

The liner notes have a line that touches on something I think about a lot: ‘How do we manage the cognitive dissonance of loathing the machinations of this world whilst maintaining them?’ The song ‘Faultless’ touches on a similar theme, too. What are some ways that you reconcile or balance this in your own life?

I really wrote ‘whilst’? God, I’m such an asshole. Also, fuck you for asking me such a hard question. I don’t think that ‘existing as [x identity] is inherently revolutionary’ is a good political orientation, although some b(r)ands have done fantastically well for themselves aestheticizing it. You can’t be political in a silo; you can only be political by effecting other people. Through Pandemix I don’t really have much interest in issuing proclamations; I’m interested in prompting questions in myself, deconstructing my own orientation to the world, and hoping that it resonates with the kinds of people who are inclined to ask those same questions.

In ‘Another Wall’ you say, ‘Another wall keeps it a small world after all.’ The song is about putting up barriers. I wonder what you think the balance is for creating a community and affecting change while keeping out undesirable aspects?

That’s a pretty huge question, and one that I feel like I talk about constantly. When does exclusion cause harm, and when does it prevent it? The song is about the way we construct and maintain in-groups, the dynamics inherent in how we decide who isn’t ‘one of us.’ I think we’ll find it’s usually kinda arbitrary. In terms of harm, I think it falls into this insidious good/bad false dichotomy where once someone does harm, they did it because they are a Bad Person and were never really a Real Punk, Feminist, Queer, or whatever. This logic, while it’s understandable, denies the reality that anyone can do harm. The ideas of authenticity versus poserdom are pretty tired to me, and don’t address community-level, interpersonal impact.

What is the plan for Pandemix moving forward? How do you mitigate the issues caused by distance between members now that you’re not all in the same city?

We mitigate those issues by planning as far in advance as we can. That’s not to imply that all the details ever come together in a timely fashion, we just know half a year in advance when we’re playing a show now, as opposed to a few weeks before. We still never figure out how we’re getting to the show until the day of, though. The rest of the band is still based in Boston, so they’ve been diligently crafting new songs for me to procrastinate lyrics for just as quickly as I’ve been laboring over artwork for them to reject. There’s two songs left over from the 12-inch session that we’d like to do as a 7-inch single.

Any last words or anything you want to plug?

Boss Tuneage has put out both our records—who knows what we would be doing right now if he hadn’t taken an interest? My partner and I run Nervous Nelly Records. I work at vinyl broker Solid MFG. Venture outside your bubble.