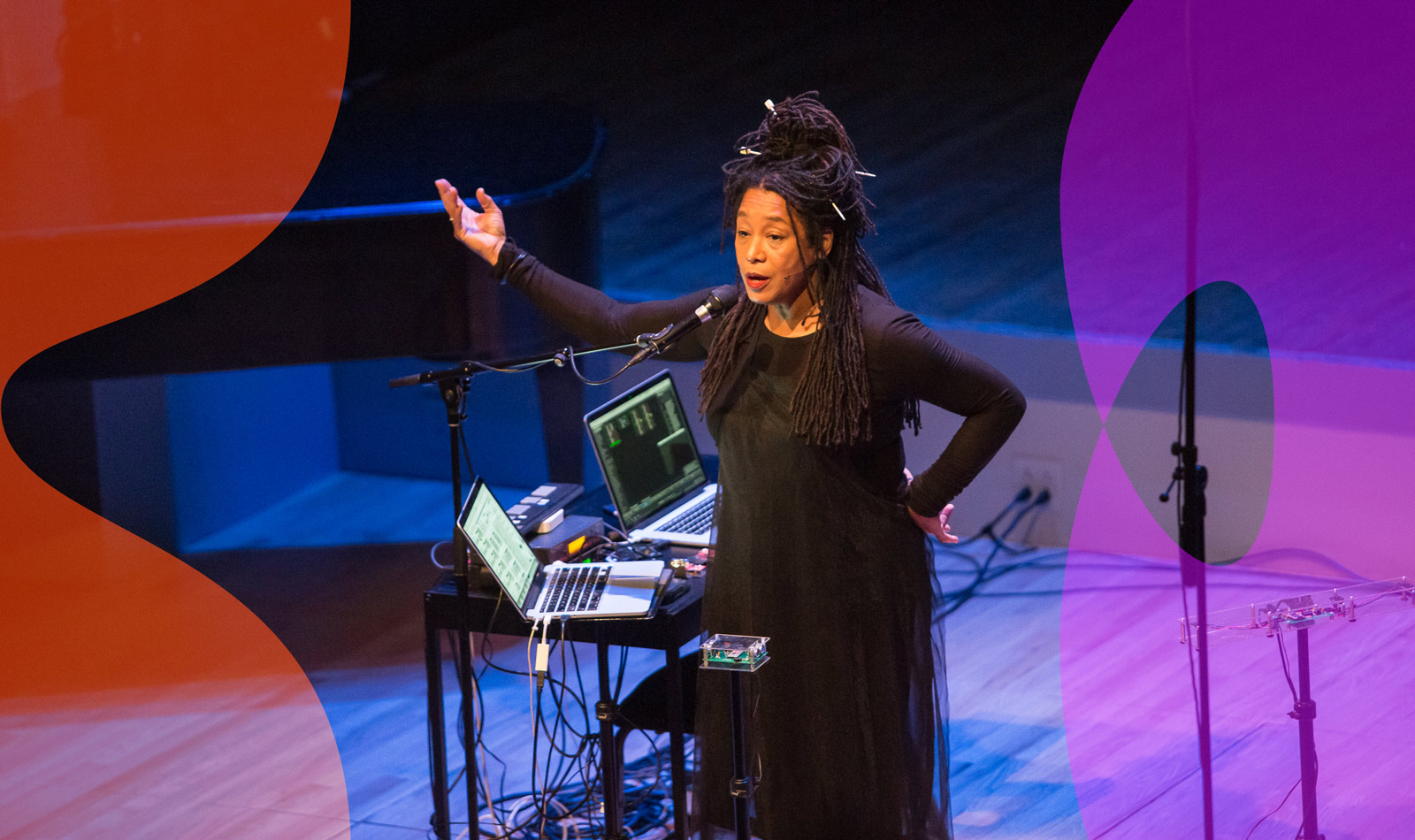 The career of Bay Area-based composer and performer Pamela Z has been long and varied, covering commissions for the Kronos Quartet and San Francisco Symphony, a Guggenheim Fellowship, and one of the more abstract TED Talks ever given. And while this year has brought her latest album, A Secret Code, it also unearthed something from her past. Soon after graduating with a music degree from the University of Colorado at Boulder, Z relocated to San Francisco and began putting down her voice-centered compositions to tape, ultimately releasing them on cassette as Echolocation in 1988. “I always thought of myself as a fence-sitter,” Z says from her studio in San Francisco. She’s buoyant and upbeat as she moves around the space, whether it’s to shut out a blaring car alarm outside or to dig out an old score. “I had one foot in punk and new wave and another in the avant-garde,” she says. “I had things I loved on all sides and I refused to choose a camp. I always tried to knit them together.”

Echolocation is a snapshot of the various music camps in the Bay Area during the early ’80s. Z photocopied the cover art by hand, distributing it throughout the U.S. underground. Decades later, a copy of the cassette landed in the lap of Jed Bindeman, who runs the imprint Freedom to Spend. “I knew right away that I was hearing something special, and as the tape continued, that idea was only solidified further,” Bindeman says.

Pianist Vijay Iyer, who collaborated with both Z and rapper Mike Ladd on his 2007 fusion of hip-hop and jazz, Still Life With Commentator, praises Z’s innovation. “Pamela Z is an absolute visionary, a one-of-a-kind artist who has situated herself at the vanguard of electronic music and contemporary performance ever since I first heard her,” he says via email. “She fearlessly and virtuosically merges live audio processing, bel canto operatic voice, movement, and theatrical performance, with a lyrical grace, wry humor, and a coherent, appealing aesthetic.”

When Z first arrived in San Francisco, she still considered herself a singer-songwriter, performing her own Laura Nyro-indebted songs on guitar along with an array of covers by artists like Joni Mitchell and Cat Stevens. But it was a Weather Report concert that shifted her perspective “There was this moment where the entire band left the stage except for Jaco Pastorius,” she recalls. “He started to solo, looping his bass with a digital delay stompbox. The very next day, I went to a music store and asked what it was.”

She took home an Ibanez rack-mountable digital delay and was smitten by the way the sampling technology instantly transformed her voice. “From that moment, I just started composing a whole different kind of music. I started listening more to timbre, repetition, layering, and patterns, thinking less about conventional harmony, melody, rhythm, song structure. My poor neighbors—I never went to sleep that night!”

By day, Z worked at Tower Records; by night, she hit the city’s circuit of punk clubs, coffeehouses, restaurants, and art galleries, playing her music to a wide range of audiences. “The city was brimming with activity, pre-dot com gentrification,” she says. “All these different scenes: performance art, composed music, improvised music, interdisciplinary things with dance companies working with musicians, punk clubs.” She laughs at the memory of her old, weird punk-rock band/cabaret act: “We had a song called ‘Bald Boyfriend,’ and every time we performed it, we would drag a guy from the audience onstage and shave his head!”

At home, she continued experimenting with her digital delay, endlessly looping and layering her voice. Echolocation’s title track captures the results: Z’s purrs, yips, and trills whirl until they sound like a cave of bats, creating a percussive, mesmerizing piece that still astounds some 30+ years on. “I was playing with the idea of what’s real and what’s not real,” She says of the song’s lyrics. Her work follows in the path of fellow explorers like Laurie Anderson, Joan La Barbara, and Meredith Monk, but Z’s sensibilities make it all her own. “I was making a body of work that was performance-oriented—it was all live with my voice and digital delay,” she says. She did use her guitar on “Two Black Rubber Raincoats,” a track that Bindeman said made him love the tape even more: “It’s something of an anomaly, but it gives the full release a very unique edge, with it’s dark, almost post-punk pulse,” he says. A springing drum machine beat and bright synth line runs through “I Know,” and Z’s operatic high notes make it feel like a surreal new wave song.

Then there’s the unclassifiable “Pop Titles ‘You’.” It builds from the utterance of that titular word as Z adds whispers and an array of lyrics that incorporate the word. It’s thanks to her day job that the piece came together. “When I worked at Tower Records, there were no computers. The database was the Phono Log, this big, giant ring-binder book in the center of the store. It was like an overgrown telephone book, a catalog of every song currently in print,” she says. “One of my duties was to update the Phono Log. So I pulled out a page to throw in the trash and I started reading it and said ‘Woah, this is a piece.’” That slice of 1986 song titles runs the gamut, from love and resentment to declarations like, “You Sure Got This Ol’ Redneck Feelin’ Blue” and “You Sure Tell It Like It Is, George Jones.”

Z was pleasantly surprised when she learned that Freedom to Spend wanted to reissue the cassette—though it initially gave her pause. “This is so far away from where I am now, it’s an odd representation to have of myself out there,” she thought at first. But listening back revealed something else. “There are two pieces that I still have in my performing repertoire. So it’s not that big of a leap,” she says. “It completes a history for me.”