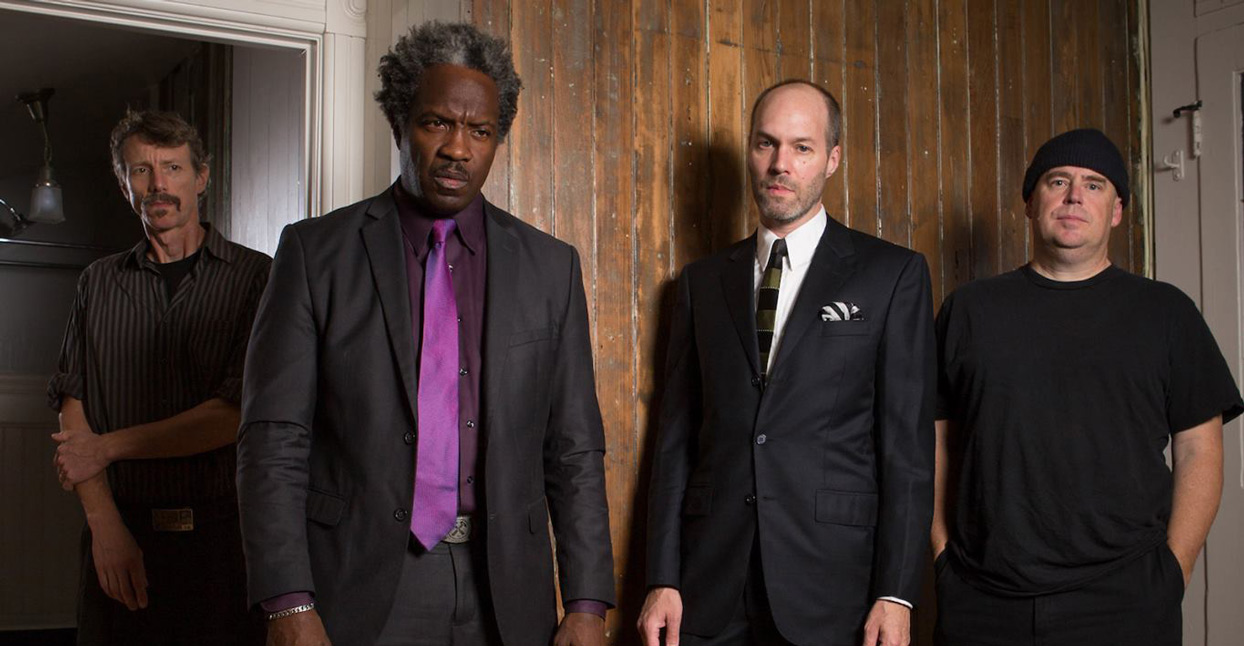 Simultaneously smart and loutish, severely disciplined and wildly chaotic, legendary experimental rock band Oxbow combines the musical mastery of guitarist Niko Wenner, drummer Greg Davis and bassist Dan Adams with the visceral caterwaul of vocalist Eugene Robinson. In a live setting, the band executes their songs with precision while the tattooed Robinson menaces the crowd, virtually naked. The potential for physical harm is ever present; there are countless reports of Robinson, an amateur fighter, subduing rowdy “fans” with his formidable martial arts skill set. The group is currently set to release The Thin Black Duke on Hydra Head Records, their first studio album since 2007’s The Narcotic Story. As its title suggests, The Thin Black Duke folds baroque Bowie-esque pop into the heaving, gnashing Oxbow sound for their most compositionally coherent and personally challenging effort yet.

Oxbow’s tale begins in the Bay Area in the ‘80s, when Robinson sang for hardcore punk band Whipping Boy. They’d appeared on the seminal punk compilation Not So Quiet on the Western Front, which documented the 1982 northern California punk scene. Wenner joined the band in 1984; Oxbow began in 1989 as a side project of Wenner and Robinson’s which slowly took on a life of its own.

Dan Adams, who had been drawing attention in the jazz scene, was drafted into Whipping Boy from his former punk band The Ugly Americans. At the time Adams joined Whipping Boy, Oxbow’s debut Fuckfest had already been released. Upon joining Oxbow, he switched to bass. The lineup was complete with the addition of drummer Greg Davis. Adams recalls, “I answered an ad in a local paper, which was written in a way which made me fairly sure this was placed by Eugene and his old band. I started playing drums in Whipping Boy, which was fading, and transitioned to bass as Oxbow became a living entity.”

Oxbow’s music is hard to classify; they employ traditional forms in decidedly non-traditional ways. There are humid, bluesy guitars over a razor-sharp rhythm section—massive drums and serpentine bass lines add heaviness and melody. Robinson’s vocals are often improvised and multi-tracked, sounding like he’s reading from an imaginary book written by his subconscious shadow self.  Wenner breaks down the Oxbow aesthetic like this: “Near the time I wore out my Van Halen tape, I had a vision while riding on the school bus one afternoon. We passed below tree branches and bits of bright sunlight flickered and splashed alternating with shadows and leaf-green light playing over the bus windows. The play of pieces of light and shadow was speeding up and slowing down simultaneously, unpredictably, fantastically. And I thought, ’What if instead of Van Halen’s music, Eddie Van Halen’s guitar played rhythms like I’m seeing now?’ As a 14-year-old, newly serious guitar player, it was years before I was conscious of hearing composed music that sounded anything like that. So I guessed that I’d have to do it myself. Eventually, Oxbow became a venue for making music with that sensibility. I still take great musical inspiration from nature and art. It’s fair to say we all do. And that results in what you see in the packaging and hear in the music.”

Indeed, there is something natural and intuitive in Oxbow’s challenging work. Adams says simply that they make music with, “the same impetus as breathing. It just doesn’t have to happen as often.” It may seem like 10 years is a long time between records, but Oxbow are unaffected by the usual industry pressures; they make music on their terms. “We became ever more conscious of lives inexorably slipping away from us,” says Wenner, “and [we tried] our hardest to make the almightiest, best, finest Oxbow record that could ever exist, in part because of the horrible realization that the brief summer of our beautiful lives will quite certainly end in an icy winter of death—that, and a desire to be terribly rich and constantly well laid, of course.” Robinson’s take is similarly pensive. “If you’ve followed any Oxbow record it might feel like being dropped into the middle of a book, which largely, is exactly what’s happening,” he says. “So making this record was for me, a way to complete the song cycle that started with Fuckfest. What complexion will Oxbow adhere to going forward? A different one; I’m attracted less to the emotional agita of young adult living and much more impressed with the depressive existential chill of end of life issues. What this means in musical terms? No idea.”

Initially, the band was unsure which label would be releasing the The Thin Black Duke. Oxbow had been working with Hydra Head since 2007. However, in 2012, Aaron Turner, Hydra Head’s seigneur, announced the “imminent demise” of the label. According to his post on the record label’s blog, Hydra Head would be ceasing all new releases, operating, like other pillars of the underground such as Touch & Go, primarily to maintain back catalog. The Thin Black Duke is a necessary exception. Turner says, “I stayed in contact with Oxbow after halting new releases a few years back. I’d been asking them about what they were doing with Thin Black Duke—a record that’s been a long time in the making and which Hydra Head were originally supposed to release— and Eugene told me they hadn’t found a good home for it. This was outrageous to me, considering what an amazing band they are, their history and the body of work they’ve created. I think I said something to Eugene like ‘It’s painful to me to think of this album coming out on another label—especially one that isn’t going to give it the treatment it deserves.’”

After discussing the project with the band as a whole, and pondering what it would mean to start doing new releases again even on a case-by-case basis, Turner and Oxbow decided to go forward. “We’ve shared a good run so far,” Turner reflects. “I believe there is a mutual understanding and respect for each other’s work, and in some ways Oxbow is the ultimate representation of what I want the label to be—inventive, sincere, hard to categorize, yet possessing a coherent vision, and comprised of good people with fierce creative integrity.”