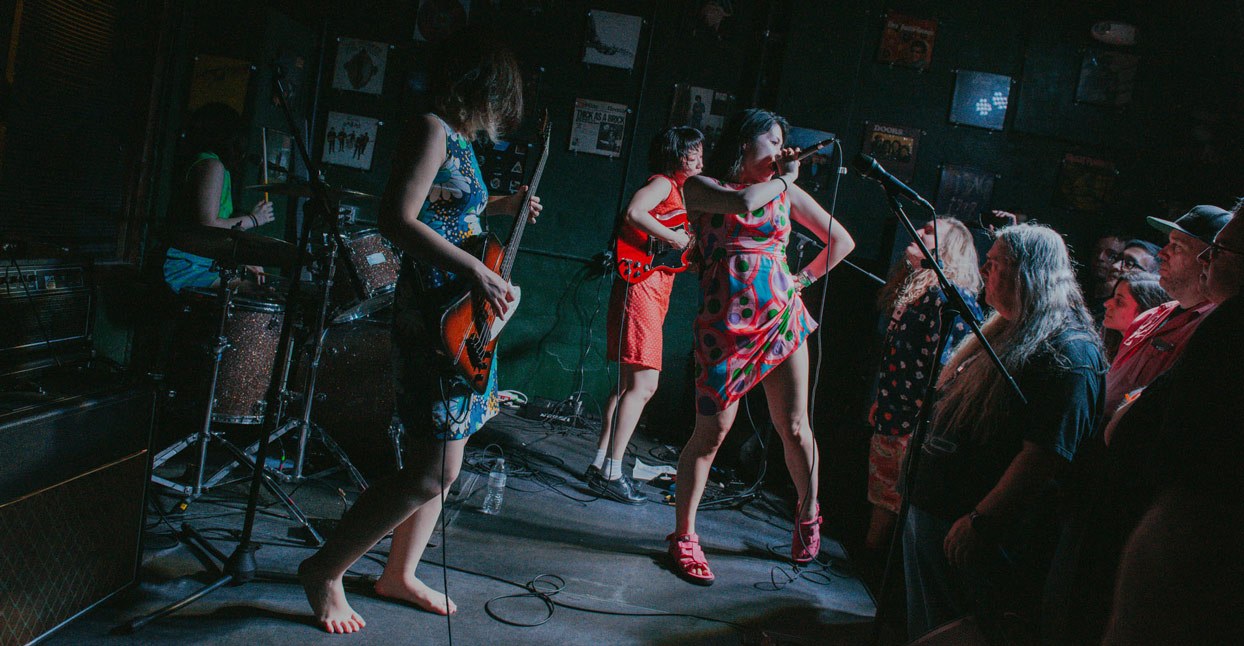 Three years after their first proper international release, Okoshiyasu!! Otoboke Beaver, a collection of previously-released tracks released by Damnably in March 2016, Otoboke Beaver are one of the most hyped punk bands in the scene. The Kyoto-based quartet—so-named for a “love hotel” in their hometown they’ve never visited, and don’t intend to—are bonafide road warriors at this point: stints at SXSW, Fuji Rock, and Coachella, as well as multiple tours overseas. They’ve even attained some minor commercial success in the U.K. with 2017’s Love Is Short 7-inch, which enjoyed a four-week stay on the singles charts.

These accolades have yet to ameliorate Otoboke Beaver’s insatiable rage, though—and their new album, Itekoma Hits, is as bloodthirsty as it gets, even by punk standards. Forget girl power: Across these 14 whiplash-inducing cuts, the group’s eponymous members—guitarists Accorinrin and Yoyoyoshie, the latter of whom also sings; bassist Hiro-Chan, and drummer Kahokiss—are avatars for their righteous fury, and by extension, our own: serial cheaters, would-be lotharios, and abusive bosses torched in a gleeful auto-de-fé, inspired by their past experiences.

“Otoboke Beaver allows us to express ourselves in a way we couldn’t do in our regular life,” Accorinrin explains. “We don’t assume to speak for all women—we can only speak for our own experience—but if other women think, ‘Yes, I understand this experience,’ and can feel power, then we are happy.”

Otoboke Beaver’s songs frequently explore such scenarios through the lens of “girls’ love,” a catch-all for how young women navigate relationships—namely, fuckboy bullshit—and, hopefully, how they emerge even stronger than before. “Datsu, Hikage No Onna,” the record’s techno-flavored opening track and the band’s personal favorite, opens with Accorinrin informing a no-good lover (in English, lest the venom get lost in translation), “I hate you!” The frontwoman goes on to issue an edict of all-out destruction: “Bad luck with women for you, everyday / Bad luck with women for you, every time / I hope you lose your home and all you have / No more second chances for good.” That the song’s title translates to “Liberation! Woman in the Shadows” tells you everything you need to know.

Accorinrin—who calls herself a woman with “many loves”—wasn’t always this confident. Before forming the band, she says, she used men’s interest as a barometer for her value as a person. “I thought that I had to be a so-called ‘good woman,’ that I would not be loved otherwise,” she admits. “However, as I expressed myself in music with Otoboke Beaver, and grew from the experiences being in the band, I gradually became able to accept my ‘negative part’ as my individuality; I felt that doing what I wanted was the most enjoyable and attractive. So these days, it has become possible [for me] to sing of angry, sad, regretful, obscene feelings.”

It’s a far cry, too, from the days of the band’s debut performance in 2009: just four young women making noise in their predominantly male music society, covering songs by pioneering Japanese noise rockers Number Girl. “We performed a cover of Number Girl’s ‘透明少女’ [‘Toumei Shoujo’] in front of a few club members,” Yoyoyoshie recalls. “Some liked it; some were not impressed. It seemed to us, though, that the club members generally thought it was a too slow-tempoed Number Girl—by real girls.”

Several months ago, Otoboke Beaver—ascendant firebrands at this point, as opposed to amateur musicians—crossed paths with Number Girl’s guitarist, Hisako Tabuchi, at an area music venue. They relayed the above backstory to their idol who broke out laughing, seemingly awestruck by this musical butterfly effect. “I guess she couldn’t imagine a Number Girl cover band became Otoboke Beaver,” proposes Yoyoyoshie.

Or perhaps, it was just meant to be.