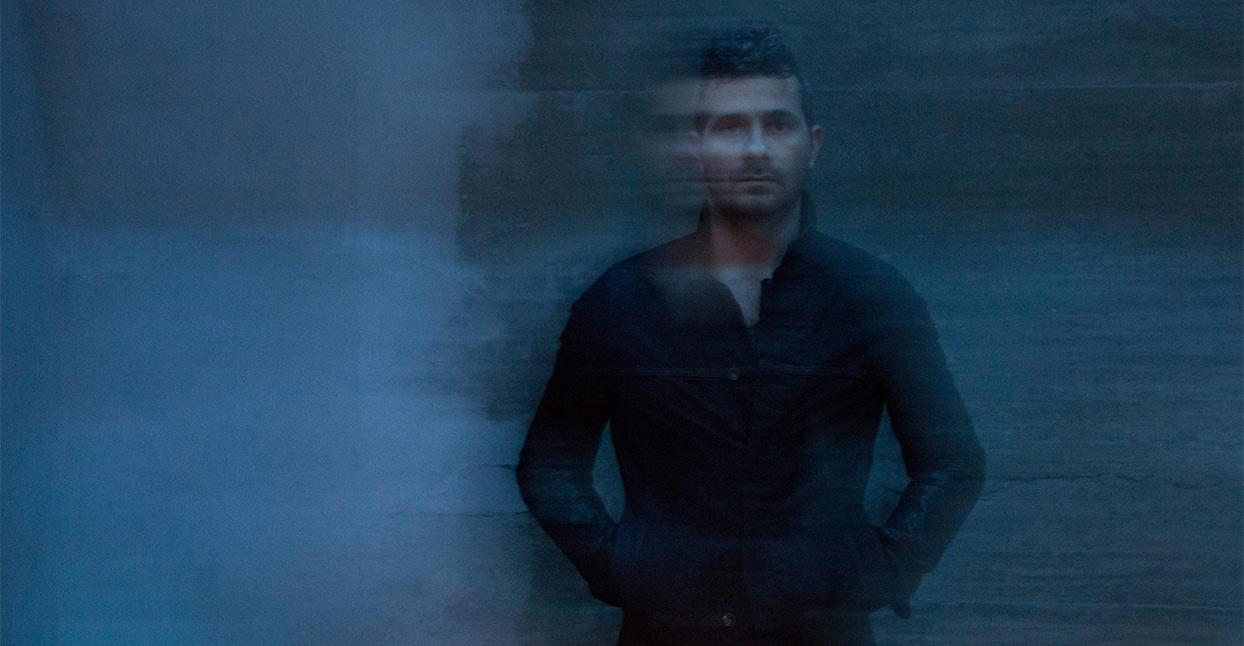 Electronic musician/producer Josh Eustis is known as a lot of things. He’s marked time as a touring member of both Nine Inch Nails and Puscifer. He’s made albums with Sons of Magdalene and Second Woman. And then there’s Telefon Tel Aviv, an electronic project started with pal Charles Cooper, a banner that Eustis still performs under as a solo artist. Just don’t call any of his endeavors “side projects.”

“I’ve always wrinkled my nose at that expression,” Eustis says over lattes at a coffee shop in Los Angeles’ Echo Park neighborhood. “Everyone I know has multiple projects, and it’s a question of what are they focusing on at the moment.”

After a lengthy hiatus, due in large part to the tragic death of Cooper in 2009, it’s Telefon Tel Aviv that he’s focusing on now. What started as a string of live shows earlier this year (including a run opening for Moderat) sparked a desire to work on new tracks. (Eustis estimates that a new album is about “30% completed.”) There’s also the reissue of Telefon’s debut 2001 album, Fahrenheit Fair Enough, a project that was five years in the making, as friends and collaborators helped unearth archive material. An exercise in pan-genre experimentation, the album crosses moods from clamorous walls of noise to understated sentimentality—even if, as Eustis recalls, that didn’t always reflect their headspace.

What was the mood like while recording Fahrenheit Fair Enough?

I definitely hear a little twenty-three year old, rambunctious shithead. Two of them. I’m remembering little specific incidents and the feeling of what the weather was like in New Orleans in the fall of 1999. Which is when we started making that record. Hanging out with my friends all night listening to music. Going out and getting wasted. Staying out until seven, eight in the morning, working until noon. Watching football at noon on Sunday. Going to the same Vietnamese restaurant every day. Which I still do when I’m there. It’s like a time capsule. It sounds really hackneyed to say that. But it feels like I took a bunch of that stuff and buried it.

We were like, “We want to make something cool.” We wanted to incorporate elements of southern rap music and R&B. British IDM and American IDM and post-rock. We wanted to fuse it all together and see if we could make it work. It was an experiment. Listening to what we were working on, we figured there was no way this could ever be a big deal. If we sold 500 copies of this record we’ll be so stoked! Our expectations were super low. We wanted to make it to make it. Just to throw our hat in the ring.

I feel like that attitude isn’t always so easy to come by as an adult.

I know. It was also this young curiosity of not knowing how to do what we wanted to do. There was no roadmap technically in the studio. So much time that went into that record was pure studio experimentation.  Which is a thing that always motivates me, almost beyond anything else. This is what allowed us to work 14 hours at a time without stopping. Just taking turns on the machine, exploring for us what was completely uncharted territory.

I haven’t had that feeling since then, until now. I started learning Max/MSP, which is this visual object-oriented programming language for music. It’s software and it involves a ton of math. It’s really complicated and the learning curve is absurd. I thought my ability to learn, my ability to retain and understand new information had ossified a decade ago. But now I’m understanding mathematical expressions that I never knew I’d be able to understand. I’m dreaming about numbers and algebra and weird shit that I’ve never been interested in. I’ve hated it my whole life. But the beautiful of it is that it’s sort of like a language. Numbers represent a concept that’s universal. The beauty of that is that math is the universal language of the universe. If we were going to communicate with an alien civilization, we’d be communicating first by using simple mathematics. We’d be showing that one and one is two. And they would go “Yeah! Totally!”

What made you decide to revive Telefon Tel Aviv after a half decade away?

Well it was kind of a symptom of not being sure if I could still do it. Instead of giving up on it without trying, that seemed stupid and a waste, I figured I should at least try to do it on my own to see if it was possible and then fail at it instead of just saying I couldn’t do it. It’s basically an attempt to do it. I don’t know if I’m actually going to succeed at it.

What is your definition of failure?

Just if I do a record and nobody cares and it’s a bad record. Then I can’t play shows.

No one caring would really suck. But what would be a bad record?

It’s a little bit of a challenge, trying to put myself in Charlie’s headspace and trying to do what he would have done. The amount of work that goes into the record like that is tremendous amount of sheer human working hours. Let’s see if I have enough time to do it. I’ve made records quickly and easily, and I’ve spent years making records. It depends what the music is like. If I’m doing weirder more abstract stuff things come pretty quickly. Song oriented stuff doesn’t come quickly. It takes a lot longer for me. We’ll see where it’s going to go. I know what I’m going to do. I just have to sit down and do it.

How did you decide to start performing live again?

A lot of that has to do with Ben Wynn who records under the name Deru. He was closing the book on a record cycle for a record he did called 1979. He talked to me last December. ‘Look, I’ve got the venue and I think we’re going to be able to do the visual stuff! I just need an opener.’ Pregnant pause. ‘What if maybe I opened for you?’ So he gently pushed me into it.

I have to talk myself into the idea of playing shows. But once I have a show I’m fine. It’s the saying yes that’s really hard. I try to think of a million excuses to scuttle the whole thing. The older I get and the more sensible I get, those excuses don’t hold water. It’s mostly the Carrie excuse. “They’re all going to laugh at you!” It’s the fear of getting on stage and cratering. But even on bad nights it’s not that bad.

Which is funny, because as a music fan anytime I’m in front of a musician I’m rooting for them to pull through.

I think audiences are split half and half between people who are there and really want the artist to succeed and the other half who really want them to implode on stage. Look at Kanye. Half of his fans just want to see him destroy himself. I feel like that’s a macro version of what every artist experiences.

But when it’s a smaller artist, I feel like I’m going to see them live because I’ve already emotionally invested in them.

There is definitely that element. And that’s why we play shows. You can’t buy that on iTunes or have it on your phone.  The moment where someone is playing live a piece of music that means something to you, I can’t tell you how many times that’s happened to me where I’m in the audience just getting my mind blown by something that I’m hearing.

Anyone in particular come to mind?

So many. Cocteau Twins in ‘94. Steve Reich in 2016 at Carnegie Hall. Imaginary Softwoods at Atonal in August in Berlin. He’s a Bandcamp hero. That’s the only place you can get them! His performance was one of the most meaningful musical experiences of my life. I’ve never heard his music until then. There really aren’t words for it. It was unreal.

When you look back through your body of work, do you have any regrets?

You’re going to book a therapy session after this conversation.

Nah. Therapy doesn’t work on me. I have to talk to my friends or my mother. I’m completely immune to psychoanalysis. I could go to a psychiatrist and they could say, “These are your problems.” But I know why my problems are already. I don’t have it all under control, but I know what they are. When I’m having a certain kind of emotional or psychological freak-out, I know the person to call.  I have a friend that’s good for when I’m freaking out about being broke. I have another friend who’s good for when I want to jump off a bridge. I’m surrounded with amazing people in my life. I’m really lucky.

If today was the last day on earth would you be working?

Oh I am an optimistic. 100% I’m probably the only one you’ll ever meet. I am not a cynical person. I haven’t always been. I only became an optimistic after Charlie died. I was cynical up until then. Part of my brain chemistry changed. When you go through something like that your brain wires get crossed. It made my priorities completely realign. I was so worried about the little bullshit that didn’t matter. After he died I realized what does matter. I think it allowed me to let slide that which truly does not fucking matter at all. I hate to say that something good came out of it, but for me that is the only good that came out of it. Since that’s the only good thing that came out of it, I try to really commit to it. It’s like the sky is falling and I don’t really give a shit. I can still walk, I can still see, I still have my ears, I have my health, I have great friends, my family is awesome, my girlfriend is awesome, my pet bunny is awesome. Whenever my brain starts going, “Oh you’re fucked and everything is fucked! You’re totally going to die! You’re broke! You’re going to crash your car! Everyone hates you!” Some of that may be true, but most of it probably isn’t. Everything is pretty chill. You have to give fucks, but there just has to be a judicious distribution of fucks.