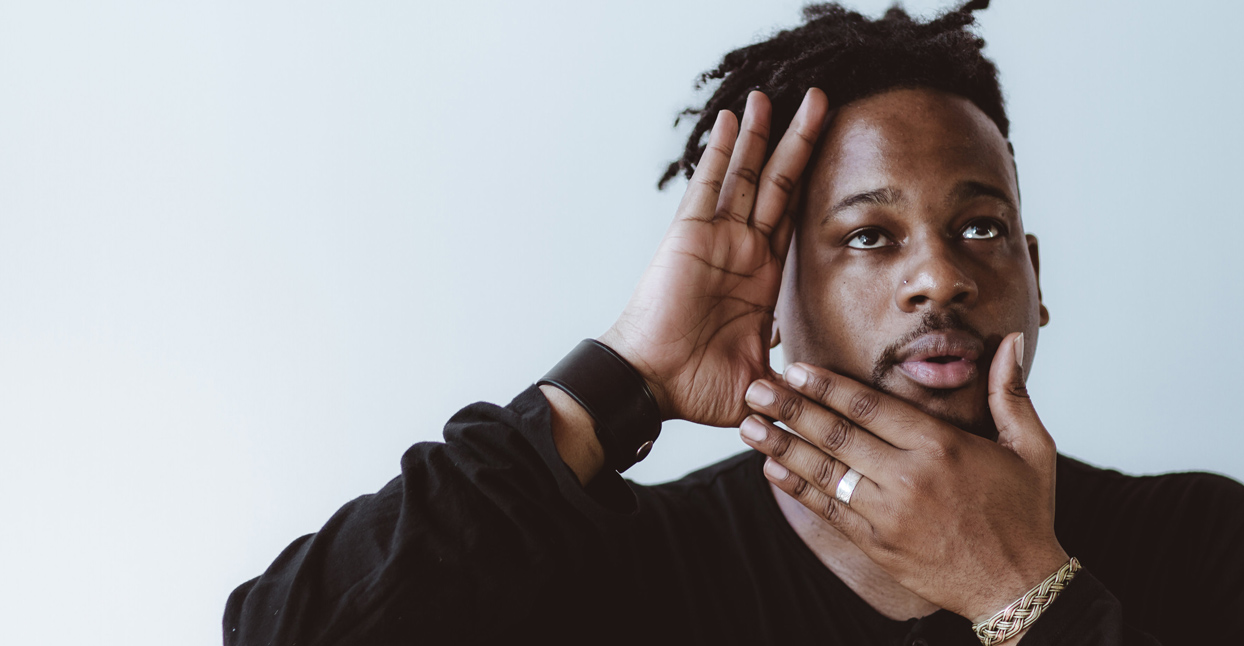 Lyricist Open Mike Eagle has a clear plan for his recently-announced TV show on Comedy Central. “I want them to come away feeling like, ‘Oh, black comedy, black entertainment, black music isn’t what I thought it was,’ if they thought that to begin with.”

In November, Eagle spoke confidently with The New York Times about his live comedy show, The New Negroes, which he and co-creator and co-star Baron Vaughn have been performing in Los Angeles and at festivals around the country for over a year. Now, the Chicago-bred rapper will have an opportunity to present the show—and all the varying black art it encompasses—to a wider audience.

The New Negroes, which at times runs as long as two hours in its live format, was recently picked up by Comedy Central as part of a new slate of comedy shows that also includes the Reggie Watts-hosted Taskmaster. While the name of the show references The New Negro, a book published at the start of the Harlem Renaissance that encapsulated the black literary excellence from the era, Eagle is aware that it might cause some people to stay away from the show. He is fine with that.

“It’s fitting, in a sense,” he tells me over the phone. The New Negroes intends to make the audience deal with “the frustration with that level of discomfort in life.”

At its root, though, Eagle and Vaughn’s The New Negroes aims to achieve the same goals as its namesake: to prove that black art isn’t a singular concept, threaded through a needle—it’s a wide section of the quilt of American culture. The show doesn’t have a release date yet, but production starts later this summer. We spoke with Eagle about his relationship with comedy, The New Negroes, and how it will translate to television.

Who came up with the concept of The New Negroes?

It’s a comedy show that Baron Vaughn originally started, and the title is a reference to an anthology of short stories compiled at the very start of the Harlem Renaissance. The book was put together at that time because it was important to put together a volume to show literary America that there were all these different perspectives and viewpoints within the [black] community, and all these intellectuals who hadn’t had that platform. With the spirit of that, Baron started the comedy show, and I’ve been involved with the live show for a little over a year now.

I read in a New York Times interview that you had reservations using the name The New Negroes. Now transitioning to a TV show, how do you feel about it?

I’m already tired in advance explaining to people where the name comes from. [Laughs] There’s going to be some pushback for sure, because it’s a touchy word. What we’re doing is confrontational by nature. I think it makes sense that our show touches on that discomfort and the space around that word. The frustration with that level of discomfort in life is kind of what the show is rooted in.

There are a lot of people who don’t know this has been a live show for a while. What is the live show like?

The live show is primarily a stand-up showcase that me and Baron co-host, and that I perform music in. The things we talk about as hosts, and the comics involved, change from show to show.

Do you ever have different musical guests come on the live show?

Not at a live show. That’s something I’ve thought about a lot and want to do, I just never really pulled the trigger.

You’re in the very early stages of making this for television, and the live show can run 90 minutes to two hours long. Obviously, the TV show is going to be much shorter. What aspects are going to carry over to TV? Are you going to try to change anything?

Not too much. My musical contributions, without going too much into it, won’t be live, and we’ll have fewer stand-ups. Other than that, the show will remain largely the same.

I was listening to an early podcast you did with Janelle James. [Eagle hosts the Secret Skin podcast, where he interviews artists across all genres—ed.] At the very beginning of it, you said you developed a passion for comedy at a really young age. Do you remember the first joke you laughed at, or the first time laughing at something and finding it funny?

I can’t say I can isolate a specific memory, but my memories are filled with watching hours of sitcoms on television—The Cosby Show, Growing Pains, Head of the Class, Perfect Strangers—just about anything in the multi-camera sitcom space. I was always filling my brain with that sort of stuff, always seeking amusement and finding it in shows like that.

As you grew up, you went to college [Southern Illinois University Carbondale], where you met Hannibal Buress, and the two of you explored the comedy scene together. How did your time in college help develop your love for comedy?

I would say the most impactful part of my collegiate life that shaped my view of comedy was having access to the Internet, and being able to find comedy specials and clips from comics I didn’t have access to. Like, being able to find a lot of Mitch Hedberg’s stuff, or being able to dive deep with Dave Attell and Dave Chappelle—having all those things in digital format, being able to listen to them over and over again and put friends of mine onto different comics and specials I found. I was super into digging deep into George Carlin’s specials, and the history of those. I just had gigabytes and gigabytes of comedy, and I think a lot of my taste in comedy going forward was shaped by the stuff I found in that era.

There have been shows that have blended comedy and music before, like Chappelle’s Show and Saturday Night Live. What made you want to expand the relationship between music and comedy?

The spirit of the show is all about redefining the cultural image of black people—letting people know black culture is not just a monolith, and if you’re only exposed to a certain broad narrative of what black life in America means, especially in this political climate… People think [black people] can only be one thing. Just like in the Harlem Renaissance, you had the book The New Negroes, but you had the whole Harlem Renaissance movement. You had music, you had people like Duke Ellington, and Ella Fitzgerald, and Billie Holiday, they were also redefining black life for the mass American culture, and doing it in way that allowed for more penetration of some of the messages, because it was done in song. So we feel like that’s a component of what we’re trying to do; it’s vital. We think it’s important to have a multimedia format.

Especially nowadays, there’s always so much daily dread—there always has been, but even moreso over the last six months to a year—the more mediums you have to express your anger or whatever you’re feeling helps.

On your podcast, you’ve spoken to the likes of Marc Maron, Janelle James, Hannibal Buress and W. Kamau Bell. But you mentioned that you felt that because you write raps, you could also write comedy. Do you still feel that way? Or do you feel you’ve improved on separating the two skills?

That’s kind of hard to say. I think I’m a writer by nature, and maybe the way I phrased it then was a little inaccurate, because it made it sound casual—like, because I can write one thing, I can write another thing. But what I think is a more accurate thing to say now is that I know myself to be a writer—I have the potential to write in many different formats. It’s not that [writing comedy] draws from the same muscles that writing hip-hop draws from, but my ideas tend to line up. The place where my creativity comes from, I’m able to shape it in a few different ways.

Are you going to do any stand-up or put that comedy writing to test on the show?

I’m not doing stand-up on the new show, but I have done some stand-up. And I’ll definitely be involved in writing on the show—in terms of the monologues we’ll do. Monologues is the wrong word, but as hosts, we’ll have things that we say to guide the show. The show’s going to be a lot of fun.

I’m sure you want to break out of a standard structure of intro, stand-ups, and musical act—you won’t have the same structure every show.

Nope, it won’t be. Unfortunately, I can’t go too deep into it right now, but the format will be unconventional.

Your music has comedic elements to it, as highlighted by your 2014 release, Dark Comedy. On ‘Qualifiers,’ you mentioned a story where you were in Africa, but they heard your song and, because they didn’t hear ‘bitches’ and ‘hoes’ [in it], they wondered, ‘How are you rap?’ That line seems to embody the concept of The New Negroes—the idea that rap isn’t one thing, black comedy isn’t one thing.

Yeah, that is the thrust of the show. It’s based on that very thought. That informs the need to have a show like The New Negroes, because I think it’s easy to take for granted being in the States—or maybe it’s hard to understand how much Black American culture is a huge cultural export. A lot of the times, the worst of what we put out gets picked up all around the world.

What is broadcast, and what they pick up on, are the words that are said the most. So when I was in Africa and listening to popular African rappers in the area I was in [Kamuli, Uganda], there was a lot of nigga, nigga, nigga and bitch, bitch, bitch, and to me, it was horrifying. But it’s just a version of what happens here in the States where, if you were a Civil Rights activist in the ’60s, you would’ve been horrified if somebody told you that 25 years later, youth culture would have a lot of those elements in it. A lot of the reason that happens is because there’s a crazy generation gap between a lot of people who were active in those movements and their kids and grandkids. The media literacy or cultural education isn’t there.