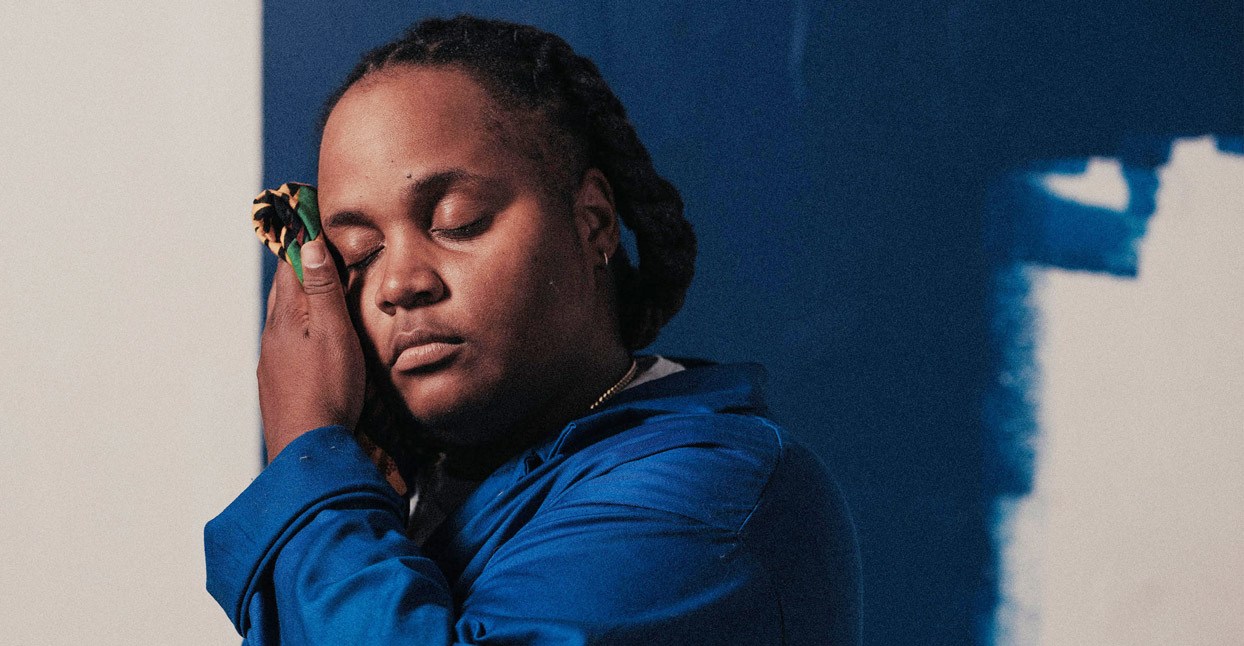 CLEO, the second record from Boston-based rapper Oompa, may have just been released last week, but its roots stretch back to the artist’s childhood. “When I started rapping in middle school, I was a chubby, braided-up kid,” says the former Women of the World poetry slam champion. “People called me ‘Queen Latifah’ or ‘Cleo’ [the name of the queer character Latifah played in the 1996 film Set It Off].”

Oompa felt drawn to Latifah’s character in the film. As she got older, she had a realization: “One of the things missing from the movie is the humanization of Cleo,” she says. “It was like we knew all of these women’s backstories except Cleo. Cleo kind of just comes in, violent and aggressive.” Wanting to give the character “some more humor” and some humanity, Oompa designed her second release to be a tribute to her childhood “doppelgänger.” The release includes a short promo video that is, “just Cleo in the world doing silly stuff.” Oompa wears the character’s blue coveralls in the promo, as well as in the album’s publicity photos and the video for first single “Feel Like Cole.”

That outfit isn’t the only ‘90s reference on CLEO—the music pays homage to the golden era of hip-hop as well. “I Want the Sky (No Ceilings),” featuring Moe Pope and Lea Grace, would fit comfortably on an R&B radio station between Des’ree and Lauryn Hill. “Feel Like Cole,” which features Anson Rap$, opens like a song by Curtis Mayfield, before becoming a showcase for Oompa’s Latifah-like delivery. “Thank You (Fed),” which features Chevé, Lea Grace, and Troy Durden, sports a gospel-tinged chorus and the kind of exuberant organ, sax, and trumpet playing that formed the basis classic soul—and was frequently sampled in ’90s rap. “By You” features queer and trans singer-songwriter Anjimile and boasts the kind of haunting guitar riff that would turn up on records by Cassandra Wilson.

And while Oompa’s home of Boston isn’t the first place that comes to mind when most people think about hip-hop, for her, the city has its benefits. “The nice thing is that because we’re a small city, if one person knows about a resource, then we all know about it,” she says. “The problem is that the resources are just so limited.” It doesn’t help that Boston, like many other cities, is becoming unaffordable for artists—and everyone else. “I grew up in Roxbury [a historically Black neighborhood] at a time when nobody wanted to be there. And now, families are getting bulldozed so that other people who can pay top dollar can be there.”

Boston clubs have not historically been welcoming to hip-hop artists, but Oompa is starting to notice a change. Clubs now reach out to her to perform, which she credits both to predecessors on the scene like Mark Merren, who hosted a weekly live underground hip-hop night at (the now defunct club) Church of Boston, and the fact that she made her name first in alternative venues (like the second stage of the Harvard-affiliated American Repertory Theater, Oberon).

She also found confidence to pursue music through a slam night called The House Slam at Haley House (which is currently closed, but has plans to reopen). As she tells it, The House Slam—co-founded by Porsha Olayiwola, who is now the poet laureate of Boston—“gave me the ability to first feel comfortable and feel fully welcome, and I didn’t have to explain any part of myself. It was a really special space for Black, brown, masculine, queer people.”

Members of The House Slam’s team, including Oompa, performed a group poem at the poetry slam Nationals a few years back called “My Masculinity.” The poem, which the group wrote together includes this line from Oompa: “My masculinity cuts off my girl in conversation and that is not a revolution.” She says the poem, “was a way for us to say we want to be more careful and more responsible with how we deal with masculinity. That helped me to kind of think about my relationship to my own femininity, and to other people who are more feminine in presentation. I don’t want to be the person who harms people based on my own identity.”

Oompa Oompa is now giving back to the community that started her. In partnership with the Somerville Arts Council, she’s presenting the upcoming Black, Brown, and Queer Festival on August 24 in Somverille, MA. “There’s a lot of diverse music, all together,” she says, describing the festival. ”Everyone from Paper Citizen to Red Shaydez.” She also has larger plans for local revitalization. “I want to buy back Roxbury,” she says. “I want to make sure my nephews are OK, the people I love are OK, that other artists have opportunities. I just want to impact as many poor people as possible, as many people who look like me as possible—or don’t look like me, but are moved by me.”