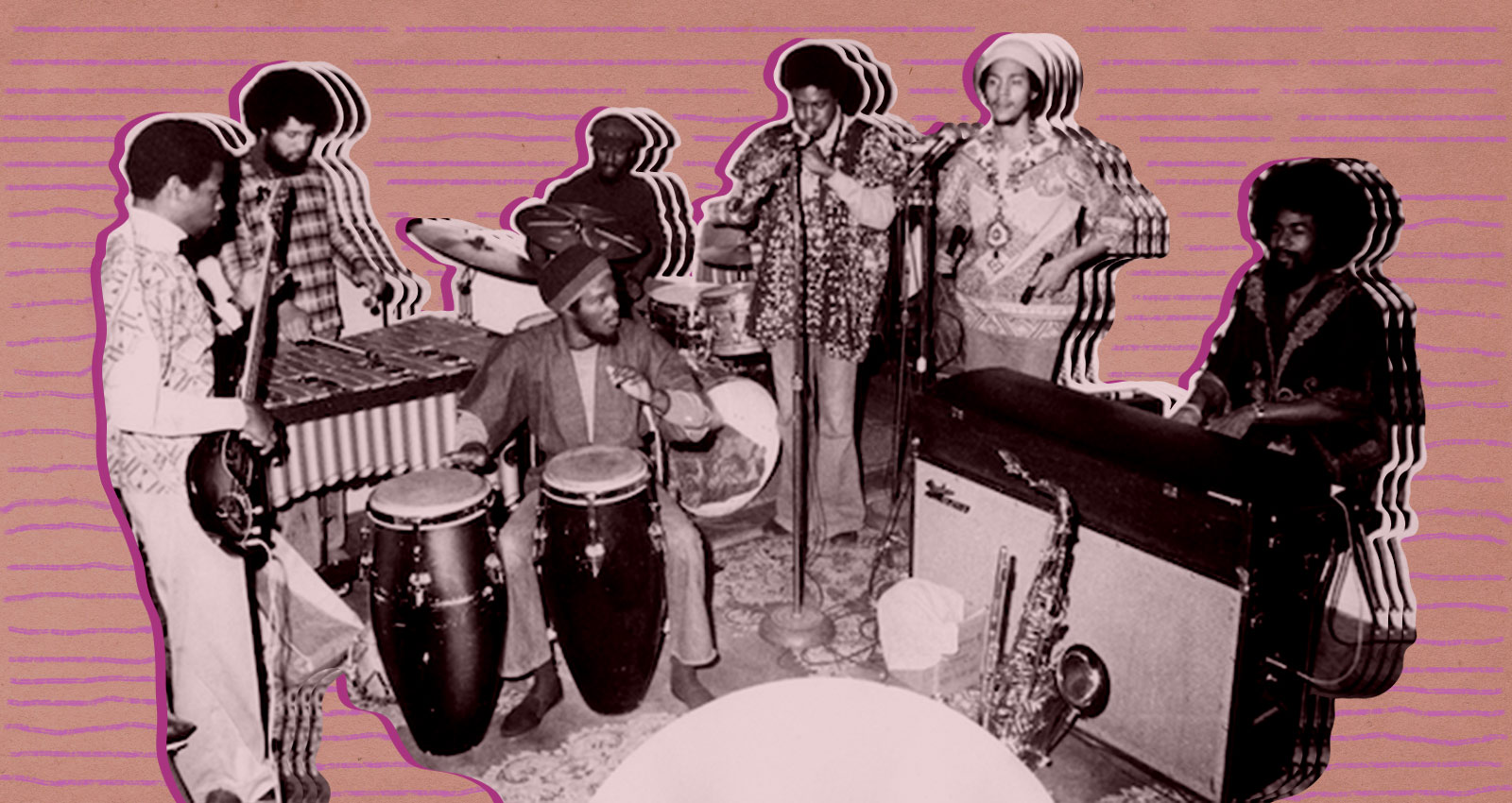 Born in the midst of the Black Power movement, Oneness Of JuJu’s music captured the fiery, exploratory spirit of the day. Formed in 1971 by saxophonist and band leader James “Plunky” Branch, performing under the name JuJu in San Francisco, the band was immersed in a Bay Area music scene that was politically radical, aesthetically free, and experimental—a perfect setting for them to pull from the rich traditions of African diasporic culture. “We forged an Afrocentric approach to avant-garde jazz. I would describe JuJu’s music as African percussion with wild-screaming saxophone. Our performances were miniature rituals. We were trying to immerse ourselves in the spirit of African music,” says Branch.

Tapping into the band’s revered status amongst astute listeners, the British label Strut has put together African Rhythms 1970-1982, a compilation that gives a comprehensive overview of the band’s recorded output. The album opens with the transcendent African drum piece “Freedom Fighters” and expands into the band’s forays into quirky cosmic soul with “Plastic,” atmospheric jazz-fusion like “Space Jungle Funk,” and the buoyant disco classic “Every Way But Loose” (a track famously remixed by Larry Levan).

After a brief stint in New York, where the band recorded two LPs for the legendary Strata-East label, the band soon moved to Branch’s hometown of Richmond, Virginia. It was in Richmond that the band would truly settle into their signature sound, a dynamic fusion of free-jazz with funk, poetry, and traditional African rhythms. Performing at rallies and other political and cultural events, the band’s eclectic melding of jazz, soul, and traditional African music melded perfectly with the social and political struggle that Richmond’s Black community was engaged in. Branch says that once the band moved to Virginia, their purpose was to create a grassroots music that was inextricably linked to the life of the community.

By the time their album African Rhythms arrived in 1975, the national desire for Black social, political, economic, and cultural self-determination had reached a fever pitch. Throughout the country, Black musicians were connecting with their African roots and infusing the music they made with a deep sense of racial pride and revolutionary fire. This spirit lived in the work of collectives that were active at the time throughout the country such as the Black Arts Repertory Theatre in Harlem, Chicago’s Association For the Advancement of Creative Musicians, the Sun Ra Arkestra, and The Sounds Of Liberation in Philadelphia, Horace Tapscott’s Pan-Afrikan People’s Arkestra in Los Angeles, and beyond. Performing at political rallies and culturally progressive events, Branch, along with his comrades Babatunde Lea (percussion), Al Hammel Rasul (piano/keys), Ronnie Toler (drums), Lon Moshe (marimba/vibraphone), Muzi Nkabinde (bass), and Eka-Ete Jackie Lewis (vocals) solidified a presence in Richmond that was deeply in tune with this radical and thoroughly Black energy.

The album’s title track and opener sets the tone perfectly with a bold, spoken word invocation: “These are African rhythms, passed down to us from the ancient spirits. Feel the spirit, a unifying force. Come on, move with the spirit! Stand up! Clap your hands!” Combining a funky drumbeat with congas and a rubbery bassline, the tune is groovy and minimal until Eka-Ete Jackie Lewis swoops in with a triumphant vocal, imploring listeners and dancers to let go and to “Let the rhythms take you to the truth. Mother Africa!” With fiery instrumental solos floating on top of the rhythm section, the band can be heard whooping it up throughout. Like much of Oneness of JuJu’s music, “African Rhythms” is indicative of the band’s ability to bring the spirit to the party.

In the years following African Rhythms, its follow up, Space Jungle Luv, as well as the two jazz- and poetry-heavy albums the group made for the Strata-East label, have been heavily sought by crate diggers, DJs, and sampling-artists alike. The band’s open drum breaks and colorful instrumentation have provided the backbone for many sample-based hip-hop cuts from KRS-One, Madlib’s Quasimoto, and others. Even J Dilla turned up with a faithful cover of “African Rhythms” on his BBE debut album Welcome 2 Detroit. African Rhythms reveals Plunky and his band’s skill at keeping in tune with the ever-evolving pulse of Black-American music and culture.