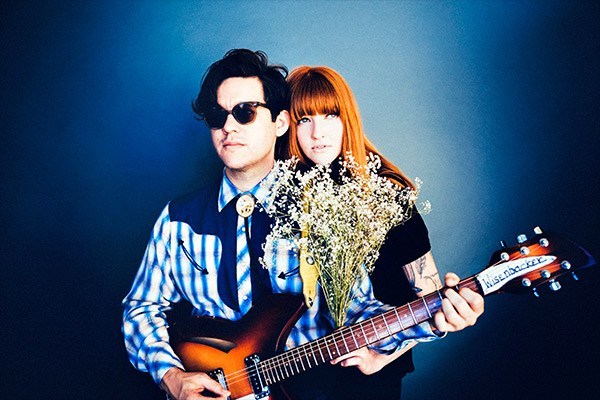 “I feel like people use a lot of studio tricks and layers to make things sound full, but our goal was to make the guitar part, bass part and drum part sound full on their own.”—Katy Goodman

Vivian Girls bassist Katy Goodman wrote her first song for her solo debut as La Sera in her bedroom, so it’s fitting that the project’s expansion into a full band began in the same place. Goodman and her husband, longtime bandmate Todd Wisenbaker, wrote their first song together while spending an afternoon lounging idly in bed.

“Keeping it as a solo project would have been unnatural,” Goodman explains. “I play music with Todd all the time. That’s what our life is. I’ve been playing with Todd forever.”

The result is La Sera’s third effort, Music For Listening To Music To, produced by Ryan Adams. Goodman and Wisenbaker bonded with Adams over their shared desire to recreate the sound of the Smiths circa Meat is Murder: stripped-down, no-frills rock n roll, with complicated musicianship hiding beneath surface-level simplicity. (As Goodman puts it, “these are definitely the hardest bass parts I’ve ever played live.”) The result is a record that pairs the crackle of country music with the lean, immediate beauty of jangle pop. It’s a record that reaffirms all of La Sera’s strengths, while pointing a confident path to the band’s future.

The first song you co-wrote with Todd was “One True Love.” I’d love to hear the story of how that happened.

We were sitting in bed watching TV or something, and Todd was playing guitar. He’d already written the verse. He was sitting there singing it and then, when the chord for the chorus kicked in—he hadn’t written the chorus yet, just the chords—I just sang the chorus that ended up in the song. And we were like, ‘Oh, we just wrote a song!’ It was an, ‘Oh, that’s easy’ moment. It happened very naturally.

That was the first song we wrote for the record, and we were like, ‘That was fun, let’s do that again.’ That was the model for how we wrote a lot of songs on the record. It was a lot of trading off inside of songs—not ‘That’s his song, and that’s my song’—each song had elements from both of us, which I really like.

You produced the album at Ryan Adams’s PAX-AM Studio and recorded live, to analog tape. What was that like?

At Ryan’s studio, there’s two floors. Todd and Nate, our drummer, were upstairs. Todd laid down his guitar and vocals live, and Nate played drums while I was singing downstairs in the vocal booth. The majority of the vocals on the record happened with Todd and Nate playing and me singing at the same time—which was definitely the first time I’d ever done that. Usually, you record all the music and the singer goes in later. With this record, I was singing while the band was playing—which Ryan was all about, because he wanted it to feel like a live show.

It was very scary and fun to sing live, especially when it’s analog, because you can’t really fix things. You’re just singing, and it’s done. I mean, you can go back and fix things, but we didn’t really do that because we liked how it sounded. I’d never recorded like that before.

The announcement that preceded the new album said you wanted to “double down on solid simplicity.” Do you think that’s an accurate description of what you were attempting?

I would say that the songs themselves are not simple—they contain the most complicated parts we’ve ever written. The simplicity is that there wasn’t much else going on [besides our instruments]. We didn’t layer in tons of keyboards, there’s almost no harmonies on the whole record. It’s meant to sound like when we do play the songs live.

I feel like people use a lot of studio tricks and layers to make things sound full, but our goal was to make the guitar part, bass part, and drum part sound full on their own. What that means is that these are the hardest parts we’ve ever written.

If the bass is moving a lot, and so is the guitar, there’s not much room for anything else without it sounding muddy and confusing. The goal was to make the music acrobatic in a way, kind of like the Smiths did. On this record, we weren’t going for ‘layered.’ We were going for simple, straightforward guitar, bass, and drums and basically nothing else.

How has it been transitioning from being a solo act to a duo?

It’s cool. It’s been a pretty slow transition. Todd joined the band early 2012, so we’ve been collaborating musically for years, but this is the first time were like, ‘Alright, full on, let’s both write and sing for the record.’ Having Todd’s voice on the record breaks it up nicely. It’s like, ‘Ah, there’s another person singing on the record!’ It keeps it interesting. It’s really high energy—not that it’s fast, particularly, more that there’s a lot going on. It’s simple-but-classic rock ‘n’ roll. It’s fun immediately from the time it starts until it ends.