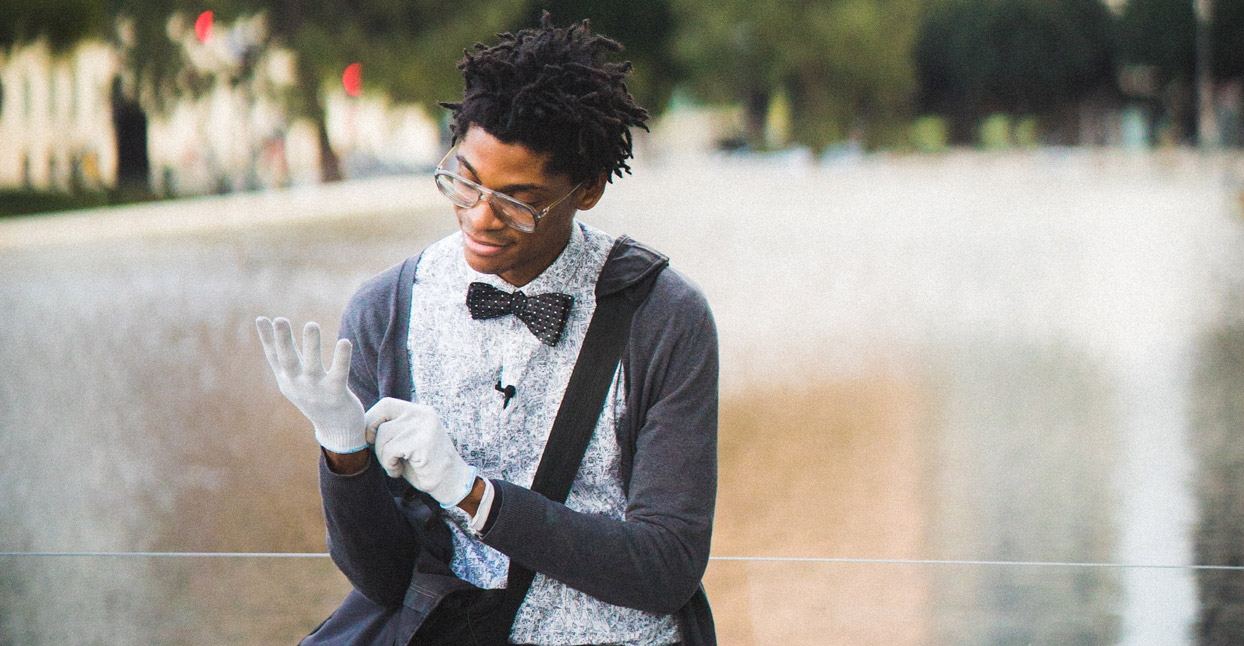 Internet fame can strike fast. Omniboi, a Los Angeles-based producer, learned that lesson when he uploaded a video of himself playing piano chords under Migos’s viral hit “Bad and Boujee.” “When I got out of work I thought my phone was broken,” says Omniboi over the phone on a February afternoon. “I opened Twitter and it was, like, 400 notifications.” The sudden attention over the song quickly pushed him to record a full version, which similarly racked up hundreds of thousands of plays.

A member of the online Paper Crane Collective, Omniboi’s music is usually less pop-oriented than his Migos cover might suggest (see: the chiptune inspired House Of Omni: Chapter 1 that he released last year). That release is more his standard lane of work, but he also does more dancefloor-ready music as one half of the duo 2ToneDisco.

We talked about his love of video game-inspired music, the moment he knew he was a music producer, and how he’s felt welcomed in Los Angeles’s electronic music community.

You grew up in Arizona. Did you enjoy it there?

I wanna say no, because now I have a really weird relationship with Arizona. As a kid, you don’t even know if where you live sucks, because you never leave. I thought every place was like Arizona. On TV, I’d see people play in snow—I’d assume it was some place in Antarctica, [because] we don’t get snow down here. No one lives in actual snow. But I did enjoy Arizona as a kid.

What were some of your favorite video game soundtracks back then?

Definitely Zelda: Ocarina of Time—[that] was a big one. NBA Jam—that’s definitely not a game where you’d focus on the music, but I remember the music being so cool to me; it was really catchy. There was a lot of Street Fighter, Sonic the Hedgehog, and Zelda. Sonic had way more complicated music than I was even hearing out of the radio, which is crazy cause it’s just a video game. And this was music made to be in the background—it wasn’t even the main focus.

I read another interview where you mentioned one of your goals is to write video game music. Have you been able to pursue that?

I haven’t been able to pursue that—at least at the scale that I want to—yet. I’m definitely closer now than I had been before. I really like writing cinematic music—not necessarily ‘dancey’ all the time, or narrative-driven. I think the reason I do it is because the first time I was touching a keyboard, I was playing Zelda songs. I make a wide variety of music, but I wanted to do things that were cinematic, and that could be for scoring commercials or movies. Because I was so steeped in the video game scene, that’s where I ended up.

Were there any other artists who were doing similar music you wanted to do?

It changed a lot. I remember when I was still in that video game sound, it was Anamanaguchi. Not necessarily because Anamanaguchi were the only chiptune act out there, but because they’d go on tour and play shows, and people would come out like it was a rock show. It wasn’t just a bunch of hidden underground nerdy video game kids at the shows. It was just people showing up to a rock concert. Before then, I didn’t know you could do that—I didn’t know you could play video game-sounding music and dance to it.

What caused you to move to Los Angeles?

It was literally music. I realized I was making—well, ‘music’ is the short answer, but the slightly longer answer is that I was doing music in Arizona, and I was successful and I was killing it. Out there, I was playing all the cool venues and touring from Arizona. I came out to L.A. to see Perfume, this J-Pop group that had never been to the States before. When I was a kid, there were a lot of things I was into, especially in high school, that you couldn’t talk to anyone about. Kind of like Anamanaguchi—being as big as they were, they aren’t a household name. They aren’t Justin Bieber or Metallica. When I saw Perfume, all the kids were wearing Anamanaguchi shirts. These kids are like I was when I was in high school. I realized that all the people I couldn’t connect with in Arizona live here, in Los Angeles. There was nothing wrong with people in Arizona, but I was trying to connect with the wrong people. When I was in the line for the Perfume show, I made so many friends, and some people recognized me from my music, which had never happened at all in Arizona. I came to the realization that if I wanted to pursue this, I needed to move.

Now that you’ve moved to Los Angeles, how would you describe the scene there?

The scene is in tune to the things we all consumed as kids—for my generation, for the most part, we were fond of Pokemon, we all knew Sailor Moon. We knew all these Japanese cartoons. We were all watching anime—even if we didn’t know it was ‘anime,’ we were all very aware of it as a thing. We were all playing with these toys and into Ninja Turtles and into Power Rangers, and none of us really understood that this stuff all came from Japan. We just thought these were ‘kid things.’ But once we all got to an age of maturity to start making things, whether it was physical art or clothes, those deep-seated inspirations from our childhood started coming out. So when I came to the L.A. scene, it was all these people making this unabashedly video game and anime-inspired music. They were making media that was just really fun and bubbly, cute, and wasn’t taking itself too seriously. In the music scene, even in the electronic music scene, there is a lot of serious image and posturing and all that. So it was really cool to hang out with these kids. Instead of wearing all black, being super serious and edgy, it was all these kids in bright pink hoodies that had blue or turquoise hair with Hello Kitty backpacks.

I keep seeing photos of you in gloves. Could you explain the gloves?

A lot of the people talking to me have known me for years and are used to me and my quirks. All the weird things that I do—my piano videos, or my bowtie obsession—these were things that were never brought to my attention, because, ‘he’s just like that.’ A lot of people think it has to do with music, but I’ve been wearing gloves since the fifth grade. it’s been a long lifestyle thing, and it’s more a part of me than it is connected to my image.