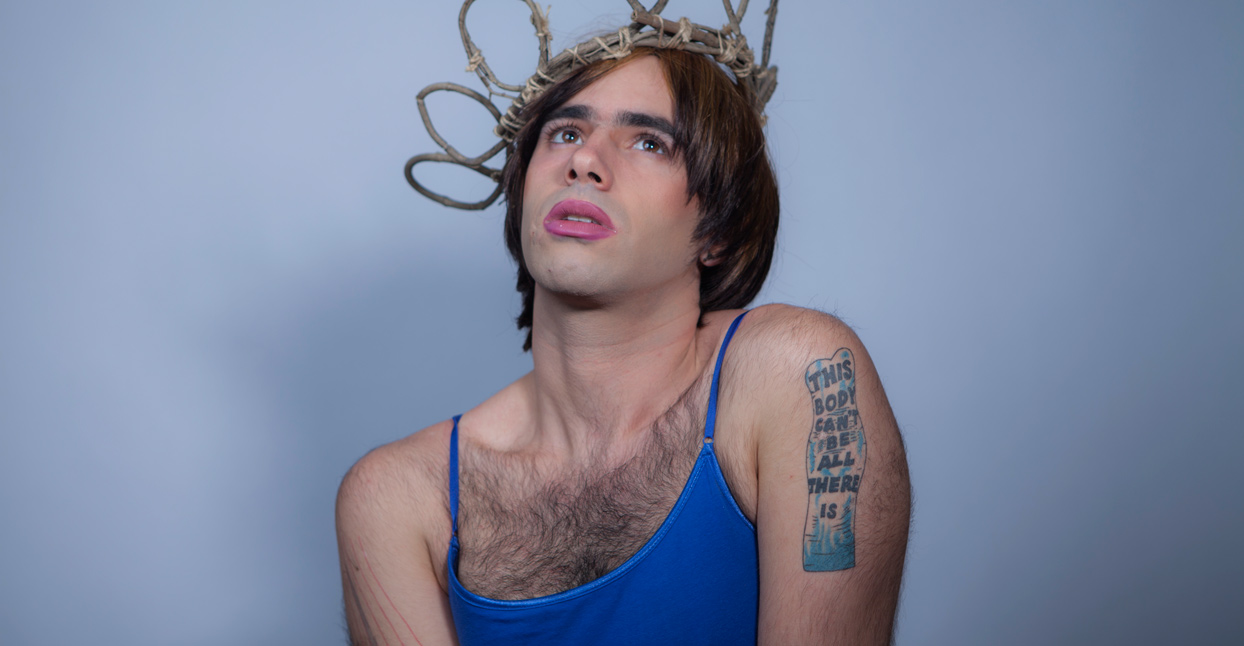 Incubated in New Orleans’ DIY queer punk scene, where trash and glamor are two sides of the same coin, noise artist Oblivia manages to be beautifully sincere without being self-serious. Armed with a voice modulator and a drum machine, Local Honey, the trans femme performance artist behind Oblivia, says that her music aims to invoke sonic womanhood—weaponizing femininity to heal the wounds of patriarchy.

Her self-released second album, Martyr Complex, is a queer take on sainthood. The title track starts with a straightforward, upbeat acoustic guitar, but things get weird quick. A piercing, high-pitched noise sweeps in alongside an ethereal vocal so heavily drenched in reverb that the lyrics are mostly indecipherable. Listen closely, and you hear a bored voice moaning “I’ll die for you any day.” The sentiment is buried so deep under an avalanche of noise that it seems hard to trust—the singer sounds like she’s already in her grave. Elsewhere, a vindictive socialite shrieks that she’s “young as fuck” over and over, before glumly pondering what people must think of her, now that she’s a ghost.

Those two songs are a good summary of Oblivia’s aims: to challenge her audience to stretch themselves beyond the earthly realm, and to not feel limited by their material bodies. The liner notes to her first album, I Fell Asleep Like This, expand the title into an emboldened credo “I FELL ASLEEP LIKE THIS AND I’M JUST GETTING STARTED.” It’s a protest slogan for the queer misfits Oblivia represents—a crew of outcasts and weirdos exploring their own gender excess through messy sex and messy lives. Working with dissonant sounds and harsh noise, the artist makes music for people and experiences that defy categorization. Or, in her own words, “It’s a symphony of messy faggotry playing the soundtrack to your crumbling empire.”

Below, we talk with the noise diva herself about her teaching herself to play and perform music, reclaiming cliche, and stripping to Cat Power.

You come from a drag background, but you wouldn’t call Oblivia or your performance work drag, would you?

I use ‘drag’ as a term to just make things easier to talk about when I’m talking about a more concentrated feminine form. Gender concentrate.

I came into understanding a lot about my gender and transness around 2011, when I was at art school in Boston. I started developing this persona of Local Honey. But I always knew in my head that this is just another part of me. This is my gender, in a way, and performance is an outlet to access parts of myself that I haven’t unlocked yet.

And then you decided to become Local Honey full time, right?

Art, for me, has always been a way to become my truest form. It just made natural sense to become what I was creating. Even if it just means taking on a different name. I still feel like my art is me, and I’m just a vessel that creates these sounds, these videos.

Tell me about your vox pedal.

I feel like I wouldn’t have a music project without vocal modification. I use a vocal pedal called TC-Helicon Live Voice Touch 2. It’s got a pretty simple interface with 200 vocal settings. You can manipulate your tuning to sound more feminine, and I’ve always admired cis female vocals and diva singers. Using my vocal pedal allows me to be this kind of weird noise diva.

Oblivia is just one of your many art projects. You also work in video and installation. What made you want to try music?

I started making music at the end of 2014. I felt inspired by a lot of queers and women making music in New Orleans, and I wanted to bring my performance practice to a more sonic place.

I feel that music is an art form that is easier for folks to get into. I like that it’s not considered a fine art. It’s more for the people and less pretentious (although people try!) I also like playing with familiar genres—pop, dance, indie ballad—and twisting them to become something more volatile and unfamiliar. It’s a conversation with kitsch.

On both Martyr Complex and I Fell Asleep Like This, you work in collaboration with other artists—including Julie Jujoo Alma and Allie Logout from punk band Special Interest, fellow queer technoise diva Psychic Hotline, and Kilbourne from NYC’s KUNQ Collective. How do you choose your collaborators?

Collaboration is huge! I wanted different sounds for the second album. I have DJ friends who make tracks, and asked them to help me out. I worked with Kilbourne to make a hardstyle track that would transition into a emo electronic auto-tune ballad. Cameron McGill (Cam Avery), from Miami, produced instrumentals for four of the songs. He does a lot of trap and hip-hop producing, and that sound plays over my weird chaotic, inaudible vocals. My friend Leonard Reidelbach was interested in playing their electric violin on a song. We ran it through my vocal effect pedal to make it sound shrieky and voice-like.

A lot of time the lyrics exist in particles, or are other pieces of writing I made in the past, and then dissect. I write little one-liners in my flip phone, or on the back of receipts when I’m working. Eventually, I piece the lines together to make poems that become a cohesive song. Other songs are more abstract vocal patterns that just fit over the beat of each instrumental. The rest of the songs were made by me fucking with a keyboard MIDI controller through Ableton, alongside generic guitar and string samples that I manipulated.

Tell me how Oblivia differs from your previous project, White Girl Wasted? What made you want to explore themes of martyrdom and sainthood?

White Girl Wasted was the name of this same music project until recently when I changed it to Oblivia. I made one album under that name, called I Fell Asleep Like This. I was really trying to push the concept of a messy drunk blonde girl delivering disturbing confessional monologues and poetry over noisy and sometimes dancey sounds. Martyr Complex concentrates on the collective human experience of watching the American empire crumble, but from a queer and/or trans perspective. The album covers the apocalypse, losing friends, ghosts, sex work, queer escapism and identity politics.

There’s this astrological philosophy called human design. According to that, my archetype for the first 30 years of my life is the martyr. It resonated with me so much! I’ve always been a person that has to try and fail several times before understanding what I need and who I am. I tried out many personas and art paths before I came to Oblivia. It’s about identity as a journey rather than a fixed point.

I was also thinking about the prevalence of the white-savior narrative in counter-culture and social justice scenes. How people in these scenes martyr themselves for social capital, without doing much for the most vulnerable people in society or, If they are being helpful, still being very vocal about how good of a person they are and taking up space. This to me is very apocalyptic and dystopian and very now.

What drew you to Joan of Arc and St. Sebastien?

I was raised Roman Catholic. I think Christianity is largely to blame for the destruction of our social sphere. The religion is used to persecute vulnerable communities (especially under the current US regime: muslims, people of color, poor folks, drug users, trans people, sex workers.) I’m drawn to the irony of this because the tenets of Christianity are actually really cool, really positive.

The album art was shot by my friend Sarrah Danziger. We wanted to recreate images of queer saints with myself as the subject. Joan of Arc can be viewed as a mad gender-variant witch, and St. Sebastien has been used as a figure depicting the simultaneous pain and pleasure that comes from gay sex. It’s interesting how these figures are taken on by a religion that actually abandons these types of people in the name of being “good people”. These are fake martyrs to me, hence the complex.

What other musicians are you really inspired by right now?

I’m inspired by friends making music in New Orleans: Softie, Psychic Hotline, Special Interest, Delish, Swampass, Rim Job. Also, other friends that don’t live here. I’m often inspired by music that sounds nothing like mine, because I would never think to do it. I love pop, rap, Italo disco, and sad-girl music. This whole winter, I’ve been listening to a lot of Them Are Us Too (RIP Cash), Mitski, Lucinda Williams, Sevdaliza, Alaska y Dinarama, Joni Mitchell, Cocteau Twins, Selena, Frank Ocean, Yves Tumor, Stevie Nicks, Solange, Jenny Lewis. I grew up on Xiu Xiu, and feel like they are a huge inspiration.

Tell me about one of your favorite performances, either as Oblivia or otherwise…

One of my favorite times performing was in New Orleans at this DIY strip show some friends of mine throw here. Generally, people strip to something loud and it’s always my thing to do something soft and quiet. So I stripped to the Cat Power song “Maybe Not.” I was wearing several pink outfits and I just slowly stripped them off layer by layer.

People reacted really well. They didn’t expect a quiet sad beautiful moment. I love performing at parties because you can really twist the emotions of the situation which are generally focused on euphoria and having a good time. I’m interested in towing that line where people are wondering if I’m being serious or not. That’s always a question people ask me after watching my performances. Are you doing this ironically or are you really embodying that cheesy emotion right now? I’m all about reclaiming cliche.
My music project plays that out. I can push my volatility in a way that can be funny to some people. Pushing vulnerable emotions to an extreme diffuses the pain around it. It creates a way for people to unpack it easier.