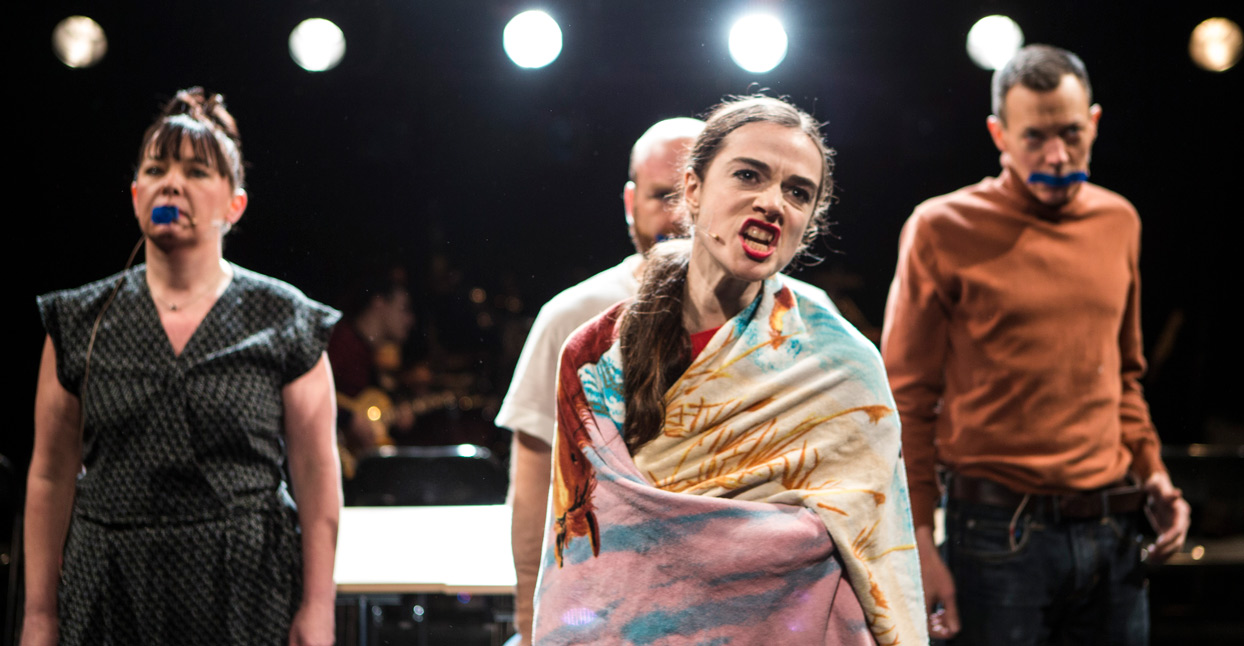 You can learn a lot about how New York-based performance collective Object Collection work just by paying attention to their name. As their website puts it: “We value accumulation above cohesion.” That description certainly fits, but also barely scratches the surface when it comes to their latest piece—tentatively self-described as an opera—It’s All True. It’s a cataclysm of punk noise, a quartet of guitars and pair of drummers navigating their way through 100 minutes of maddening twangs, bangs, and rock-band spasms. At the front of the stage four performers spout loud agitprop for the same length of time, often ascending to angered heights. “Why doesn’t everyone just tell us to fuck off right now and get it out of the way—come on! FUCK OFF!”

As with much of their work, for True, writer/director Kara Feely and composer Travis Just worked with material exhumed from elsewhere. This time they turned to the 1,500-hour live recordings archive of Fugazi, legends of D.C. punk plus juggernauts of DIY ethics and anti-establishment politics. Released as an LP plus limited edition extra 7” on U.K.-based Slip (previously home to Mica Levi & Oliver Coates, amongst others) the “opera” is the group’s second physical release this year, following the revolutionarily bent cheap&easy OCTOBER. In both cases, the material resonates within the current state of American politics, but the pieces were actually made before 2016. “It’s not a ‘Trump piece,’” explains Just. “It’s applicable, but it’s not from that time. It’s a consistent theme, no matter which asshole is in office.”

If you’re concerned True might be a tonedeaf, Broadway-bound Fugazi: The Opera, then put your mind at ease. It’s All True embodies Fugazi’s spirit, rejecting any of the actual songs from their live archive in favor of banter, jokes, tuning, feedback, and all the additional bits that happen during the throes of a Fugazi gig, which are collated into a collage of surreal re-enactment. The effect is disorienting, but as Fugazi guitarist/vocalist Guy Picciotto said to Slip, it’s “a distillation of weird social history and politics as a residue that exists in even in the most seemingly random moments.”

“As the composer, I didn’t want to base pieces on their songs,” says Just. “They played it better than we ever would, and they also did it a thousand times. Everybody can go and listen to a thousand versions of ‘Waiting Room’ and there’s no need to hear my take on it.” So Feely and Just instead took on the huge task of gathering “all the random shit” from the Fugazi live archive. They listened through to every single show, taking meticulous notes on time-coded occurrences in the recordings, transcribing the words and notating the music into a colossal library of incidental text and sound. To make things even more complicated, Fugazi were continually adding to the archive, which spans 1987 to 2003. “The fucking band kept releasing them!” jokes Just. “I started with like 800 or whatever and then the band put out 20 more and I was like, ‘Fuck, that’s another month!’ I went through and made huge log of everything and tried to describe it quickly—a drum flourish here, or bit of feedback there—and move on. It took months.”

Drawing from a wealth of recordings that spans 16 years of Fugazi shows, the opera distills the often-funny, always-angry spirit the band embodied without resorting to clichés, costumes, or clear signifiers. Live, the ensemble had the vocalists don headset mics rather than using the standard issue mic stand. “That was a promise we made Fugazi when we proposed the piece,” says Just, “that there’s not going to be somebody up there on stage imitating Ian [MacKaye].” The members of Fugazi tend to give approval to non-commercial usage of their music as a matter of principle, but once they witnessed the results of It’s All True months after giving their blessing, it resonated far stronger than expected. “All of us were both blown away and disoriented by the work,” said Picciotto about the work. “It was well beyond anything we had anticipated when agreeing to Travis’s early request.”

“It’s definitely not the complete picture,” says Just. The It’s All True LP certainly captures the organized chaos of Object Collection’s piece, but it’s still only an audio document of something made as a live experience. The faces of the collective’s powerful vocalists, their tightly choreographed movements, and constant reorganization of the space and furniture (itself a nod to DIY punk’s elbow grease) are all visceral ingredients that can’t actually translate to wax or mp3.

Perhaps even more overwhelming than the sheer punk power of the piece though, is the way Object Collection’s approach to organizing chaos rips the shows from their time and context. Several lines of speech and thought reappear at different shows throughout the archive, and Feely inserts and re-inserts those moments right together next to each other. “It has this sense of being out of time, and there’s no chronology going on,” explains Feely. Much of the text doesn’t even come from the band themselves but just the people “surrounding the shows.” One such bit of text was Kim Gordon talking at a pro-choice rally Fugazi played in 1992. By accumulating all these moments into chaotic operas—rather than rewriting them into something “cohesive” in the traditional sense—Object Collection pay an apt tribute to the spirit of American dissent Fugazi cemented. “That’s the way to pay homage to it,” says Just, “to make something new from it, and not just reflect it back to itself.”