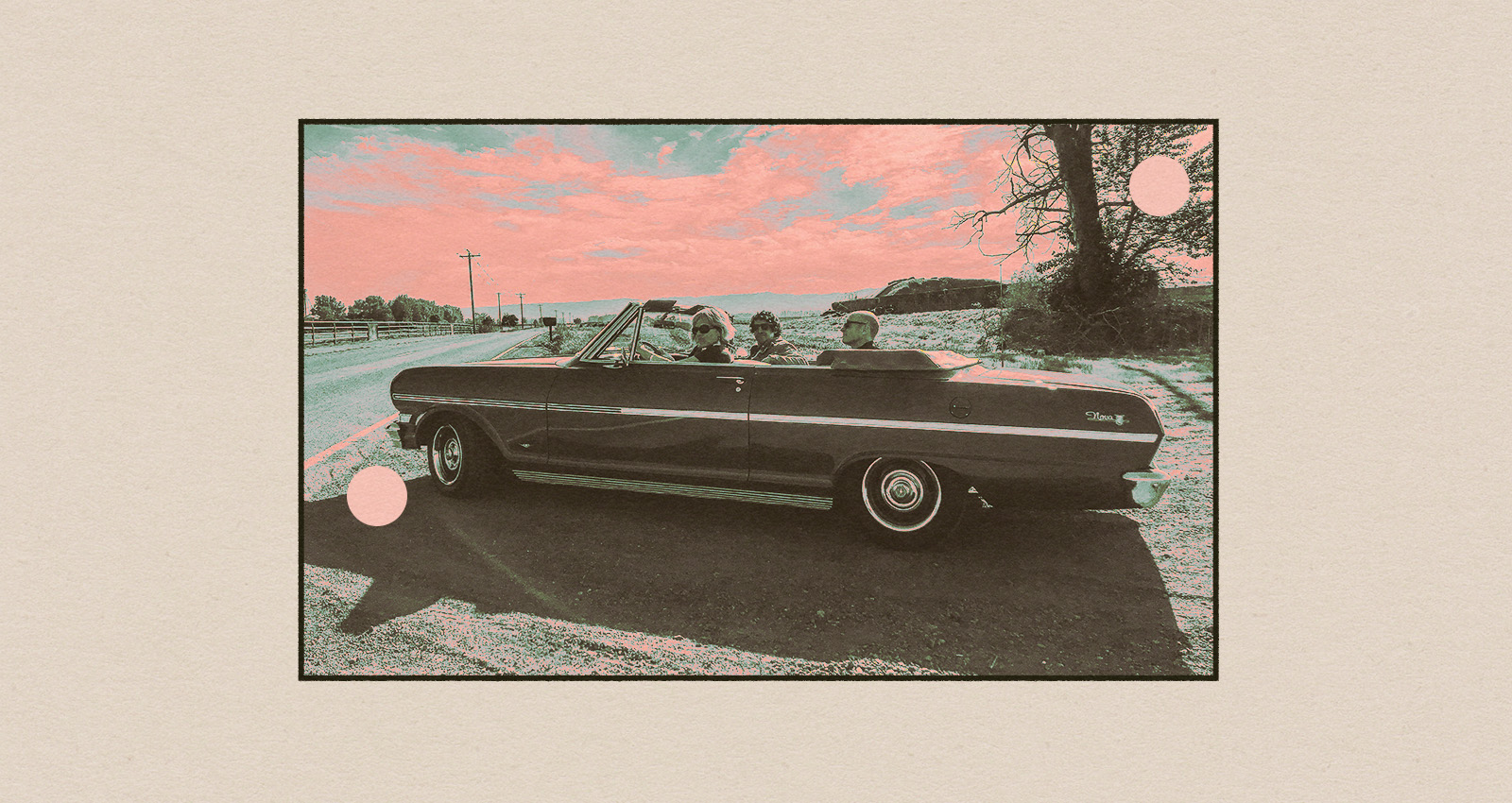 In November 2018, right around the time Janet Weiss was recording her parts for what would be her final album as the drummer for the Pacific Northwest juggernaut Sleater-Kinney, she unknowingly helped to resurrect another Portland band with roots in the city’s ’90s indie scene.

Formed in 1998, No. 2 was a trio fronted by songwriter and guitarist Neil Gust, formerly of Heatmiser, a four-piece indie band that was integral to Portland’s scene. In their initial iteration, No. 2 would last for only five years, releasing two albums and touring with, among others, Gust’s former Heatmiser bandmate, the late Elliott Smith. Within two years of No. 2’s disbandment, Gust left Portland—and his music career—for New York City.

Gust had returned to Portland on the premise that he was going to celebrate his 50th birthday by having dinner with Weiss and her partner (and Slang bandmate) Drew Grow—but it turned out to be a surprise party, with a guest list that included his ex-bandmates in No. 2: drummer Paul Pulvirenti, who played on both of No. 2’s first two albums and is currently the drummer for Eyelids; and bassist and backing vocalist Gilly Ann Hanner. Hanner had been the lead singer and guitarist for Calamity Jane in the early ‘90s and joined No. 2 for their 1999 debut No Memory, though she left the band prior to their second album, What Does Good Luck Bring? (She was replaced by Jim Talstra, previously of Dharma Bums.)

Once Gust left for New York, he and Hanner were rarely in touch. She recalled, “Neil and I weren’t in any regular contact during the hiatus—not because of any animosity. We were simply in different cities and doing different things. I was in Portland raising my kids and running my salon, he was in NYC.” Meanwhile, Gust was working as a commercial video editor.

The two had plenty to catch up on. Hanner was surprised to hear that Gust hadn’t played music with anyone the entire time he had been in New York but that he had written some songs. She replied that she wanted to hear those songs and asked if he would listen to some of the new material from her long-running Braille Stars project. Discussion then turned to talk of collaboration before Hanner took it a step further. “I asked if he would ever consider getting No. 2 back together,” she says. “He said ‘yeah!’”

Pulvirenti was sitting just one table over, so Hanner got him in on the conversation. Hanner recalls saying, “‘Hey Paulie, wanna get the band back together?’ or something like that. He said, ‘Yeah.’ We were all kind of giddy with excitement.”

Also among those present at the party was Sam Coomes of venerable Portland duo Quasi (with ex-wife Weiss), who had played briefly in Heatmiser near the end of their existence. Though Heatmiser is now best known for being the launching pad for Elliott Smith’s solo career, the band was drawing large crowds at La Luna and other Portland venues during their ’90s heyday. Gust chose to name his new band No. 2—as in the band that came after his first one. Gust’s continuing ties to Heatmiser went beyond his band’s name. Coomes recalls Quasi doing a brief West Coast tour with No. 2. Gust and Decemberists drummer John Moen recorded a song with Smith shortly before his death in 2003 called “Who’s Behind The Door?” which appeared on the 2017 reissue of What Does Good Luck Bring?

Even after No. 2 disbanded and Gust moved to New York, he stayed in touch with Coomes, and they would sometimes talk about music. Coomes recounted, “Neil was very disappointed in the trajectory of his music life at that point and really just stopped playing music altogether, which I always found kinda sad.”

“At some point, he started getting interested in it again. He played me some semi-electronic stuff, loop-based stuff, and I thought this was great. He had to get some distance, I guess, to get to the point where he was playing music just for the joy of it, just for its own sake, totally disconnected from the idea of whether people would like it or not or how it stacked up to his former bandmates, or whatever irrelevant stuff that can be so easy and detrimental to get caught up in,” Coomes continues. “At some point, he started programming drums and playing the guitar, and then it was basically like composing for a band. That’s what primed the pump for No. 2 getting back together.”

Once Gust started to write songs in earnest—putting him on the path to record the band’s third album, First Love—he had a different objective in mind than he’d had with his earlier songwriting efforts for Heatmiser and No. 2. No longer caring about how his songs would be perceived, Gust wanted to make a collection of songs that would excite him like the music on album-oriented rock radio did when he was a teenager. It was a style that was much different than the harder rock that typified much of his work with Heatmiser. However, Gust-penned tunes from their final album Mic City Sons like “Low-Flying Jets” and “Rest My Head Against the Wall,” would be more at home on any No. 2 album than on Heatmiser’s debut Dead Air. Writing songs that would fit in on an AOR playlist was also at odds with the cool punk ethos of many of his former musical colleagues.

Gust explains how making an AOR-inspired album was not about trying to create a specific type of sound but rather following a different type of songwriting and recording process. “I didn’t feel like I was doing anything that was, like, not my style. If anything, I felt like I was finally trying to do what has always been my style that I (previously) felt like I needed to apologize for in punk rock Portland in the ‘90s,” he says. As Gust discusses breaking from the confines of Portland punk culture from his Brooklyn home, a Heatmiser poster hangs just over his right shoulder.

Back in their Heatmiser days, Smith would tease Gust for being a fan of Foghat, but today Gust proudly admits his love of the ‘70s English rockers, as well as of certain songs by Boston, REO Speedwagon, and .38 Special. Despite overcoming his sheepishness about loving music that others found uncool, Gust faced other obstacles that made songwriting difficult for First Love. Though the initial rehearsals and recording sessions took place in Portland, the COVID-19 pandemic intervened. In March 2020, Gust retreated to the Connecticut home he shares with his two partners, making it impossible to practice and record with Hanner and Pulvirenti.

Aside from being separated from his bandmates, one of the bigger problems that emerged was the need for a new recording space. That was quickly solved as his partners had a boathouse, which provided Gust with a place where he could record his vocals and guitar overdubs without worrying about the noise level, though he had to contend with flooding and setting up his gear around piles of belongings. Having a free recording space made it possible for Gust to work on his songs for as long as he needed to in order to get the sound he wanted. He was trying to create moments that felt special: something that would feel as thrilling to him as the transition from verse to chorus in “Jumpin’ Jack Flash.” It would often take several attempts to get a part to sound the way he wanted. “It was hard being honest about what was wrong with (the parts) and hard to not give in to the ugly feeling that we weren’t capable of fixing them,” he says.

Gust didn’t give in, and it took a full year after the initial COVID lockdown for him to “fix” the songs to his satisfaction. Then, he had to get Hanner and Pulvirenti on board with the stylistic changes. The track “Model of the Universe” was initially a rocker, but Gust decided it needed to be slower and more atmospheric. It took a while for Hanner to adjust. “When he sent it to us, I didn’t like it at all. The space-cowboy flange guitar and slow tempo was such a departure from [the earlier] version that I was attached to, but it grew on me,” she says. Hanner eventually went all-in on the new spacey feel and created backing vocals that had a “shit ton of sweep delay so they sounded like they were in space.”

Gust also gave some direction to session keyboardist Rebecca Cole (formerly of The Minders and Wild Flag, currently of Pavement), indicating how he wanted the songs to feel, though Cole says she also had the freedom to interpret her own parts. “I wasn’t just playing Neil’s visions from his brain to my fingers. My brain got to be in there, too, and my heart got to be in there, too,” she says. “He wanted that.”

Another key figure from the Portland scene was instrumental in helping Gust to achieve the sound he wanted. Joanna Bolme, formerly of Calamity Jane and Stephen Malkmus and the Jicks (from 2007 to 2011 she was also the third member of Quasi), produced First Love. Gust credits Bolme with helping him work through the tougher moments during the recording process. “She could suggest paths to try, and she wasn’t discouraging. She heard the same potential as we did. And as soon as it started to work, she knew,” he says. It helped that Bolme shares some of Gust’s musical tastes. She also worked with Hanner and Cole to record their vocal and keyboard parts, respectively, and would decide which were best to send on to Gust.

First Love also has another direct link to Heatmiser; drummer Tony Lash mixed the album along with The Cribs’ Gary Jarman.

Much of the final product sounds more like the first two No. 2 albums than Aerosmith or Def Leppard, and AOR stations didn’t play songs like “No One Needs To Know,” which details a one-night stand involving two men. Ironically, the gorgeous “A.O.R.” is more understated than typical rock radio fare, but it’s easy to imagine the riffy “Time’s Up” wedged in between Boston and Foreigner on an afternoon drive-time show. Gust makes his love of songs that launch him “to the moon, to the sun and the stars” explicit on “A.O.R,” but the whole album is a beautiful testament to music that makes his soul sing.

It’s an album that might not exist if not for Weiss, Grow, and their friends bringing Gust back to Portland under false pretenses. In the process, friendships reformed, and bonds were strengthened. It remains to be seen where No. 2 goes from here, particularly with the constraints of distance and a pandemic that has rolled into its third year. When asked about whether there are plans for Quasi and No. 2 to tour together in the future, Coomes said, “There aren’t any…at the moment, but it’s an interesting idea. Not sure how feasible, but interesting.”

Even though Gust’s musical career lay dormant for several years, his connection to the Portland indie scene was very much alive. Because of that, we get to enjoy a new album that shows several veterans of that scene to be as vibrant as they have ever been.