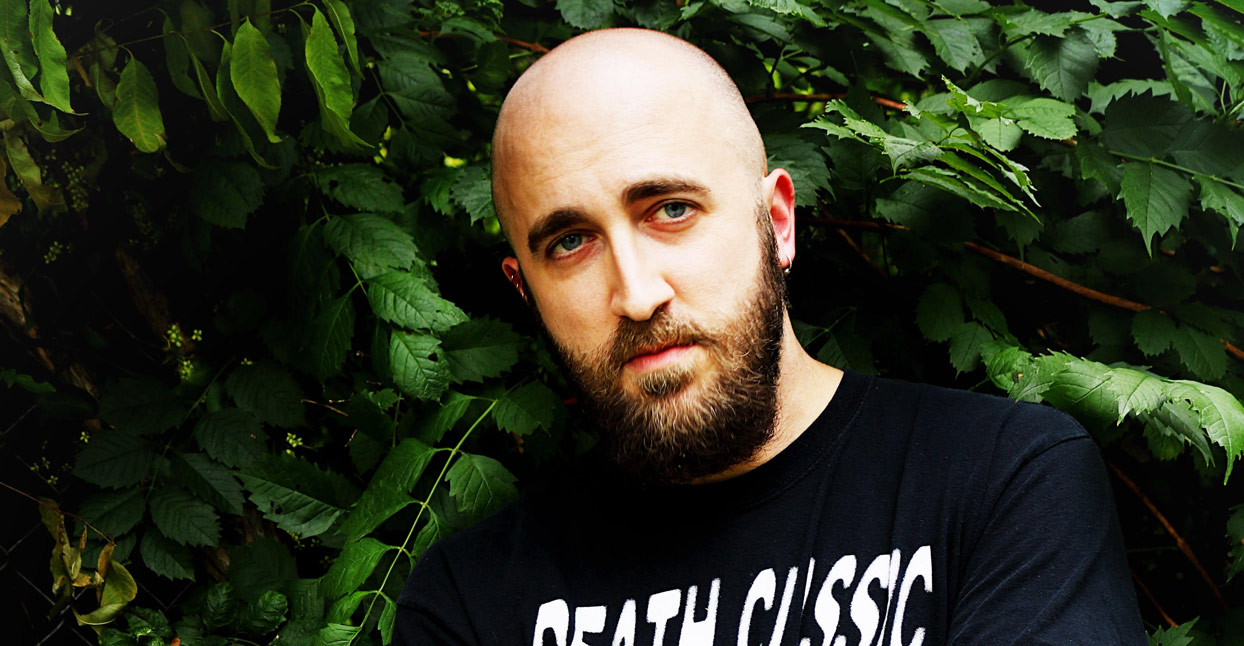 Nmesh may have been born in Louisville, KY, but you wouldn’t guess it based on the music he makes. Nmesh, aka Alex Koenig, is most often pigeonholed as a vaporwave producer who has been serving up warped, psychedelic sounds for almost two decades that feel wholly independent of geography. It’s not uncommon to confront music that doesn’t explicitly reflect its physical surroundings, but Koenig’s music—an epic vortex of collage-style plunderphonics, exquisitely crafted beats, playful repurposing, and gorgeous ambient workouts—stands in stark contrast to, say, bluegrass, the genre for which Kentucky is primarily known. For Koenig’s music, where is less important than when.

Koenig is 33, which means his formative years were shaped not by the Internet, but by mass culture expressed through the likes of Ferris Bueller, The Noid (Domino’s Pizza), and drug PSAs. “I seem to recall, sometime in my early 20s, I began obsessing about all the things that defined being a kid in the late ‘80s and early ‘90s,” Koenig says. “I was creating lists and collecting pictures of toys, commercials, movies, and television shows I grew up with. I was downloading all my favorite new jack tunes off Napster, burning CDs, and driving around totally lit, listening to Color Me Badd, After 7, and the like—sometimes even getting emotional while doing so. I was a hot mess.”

This obsession with the past would eventually filter into his music. Despite having a rich, exceptionally long discography that dates back to the early 2000s, it wasn’t until 2013’s Nu.wav Hallucinations when he struck a chord with a wider audience. “[When] vaporwave emerged around 2011/2012, Nu.wav was a chance for me to plunder the ol’ memory bank and exorcise a lot of that nostalgia—a cleansing of sorts,” he recalls. “Whereas the majority of the Tumblr generation might have gotten into vaporwave because it was the flavor of the day, it was an incredibly therapeutic discovery for me.”

Koenig’s latest as Nmesh is titled Pharma—his debut for Orange Milk Records—and, aside from being decidedly U.S.-centric in its sample choices, the album foregoes any geographical ties, choosing instead to turn nostalgia into psychedelic, sometimes nightmare-ish episodes. “Pharma is a bit more off-kilter, a bit more slap-happy,” describes Koenig. “[It’s] a 70+-minute, drug-fueled trip of sorts. It’s still very psychedelic in nature, and it rides the ebb and flow of the weird and wonderful in a relatively manic fashion.”

Rather than simply gesturing toward sadness, happiness, or fear, Pharma conjures hazy memories with deep, kitschy references. Unlike Nu.wav and its 2014 follow-up Dream Sequins®, Koenig this time appropriates not so much from his own childhood, but from what might be described as a collective memory, sampling everything from The Baby-Sitters Club TV series (“BΛSS///COP™”) to Soul II Soul (“White Lodge Simulation”). He even samples from his wife’s childhood on “Vault Maintenance 700 CMC” and “cut scene 5230-4968 albatross 0923-1874,” both of which feature clips from her old VHS home videos. Other tracks go deeper, like “Tiny Classified Ads,” which focuses on the tragic suicide of infomercial salesman Don Lapre. “The discovery of his grim demise really rattled me,” says Koenig, “probably because I still have vivid memories of his Reminder Service Training Video airing in the wee hours of the morning.”

But Nmesh’s de-emphasis on physical space doesn’t imply a de-emphasis on his physical self. In fact, when vaporwave took off in Reddit communities and networks of newly minted electronic musicians, Koenig never adopted the faceless, dehumanized persona of his contemporaries. Instead, pictures of Koenig are readily available on the Internet, and he’s not shy to share various bits of his life on social media. “I never saw myself as a vaporwave artist,” he admits. “I’ve been at this for a long time, and it just so happened I put out a couple ‘vaporwave’ albums and they gained me a bit of notoriety. There have been times where I feel a bit pigeonholed and annoyed as a result of being slapped with a label—but then I have to check myself. What’s there to complain about? At the end of the day, I’m thankful to be embraced by the vaporwave community, or any community, even if I’m constantly stepping off the sidelines.”

Vaporwave as a “genre” was always fraught with problems, both semantic and conceptual (an inherent tension that, in fact, worked brilliantly in vaporwave’s favor). It’s a style of music that initially hinged on its almost complete lack of “good taste,” and its relevance today depends not only on a shifting, malleable sense of taste, but also on the willingness to expand beyond any purported conceptual underpinnings. “I don’t really see it the same way I did years back,” explains Koenig. “Stylistically, it’s expanded to the point of being an umbrella term, essentially. It’s a shell of its original intentions. The word is used so loosely, and the tag misused and abused, that it’s hard to pinpoint exactly what vaporwave is these days. People used to call it a microgenre, which I find funny, because it’s seemingly spawned so many new subgenres.”

But for any criticism he may have, Koenig finds a way to temper it. “Regardless of how diluted the v-word has become, I’m happy that it’s led me to discover countless amazing artists that I might not have ever came across otherwise, no matter what the style.” He extends this same gratitude to his own audience. “If it was vaporwave that led to my current fanbase, then so be it. I appreciate that anyone is listening at all! It’s gratifying to be a part of such a passionate group of like-minded music nerds.”

It’s these “like-minded music nerds” who comprise much of his rabid, obsessive following. But, given the success of Koenig’s most recent Nmesh releases and the relegation of his stylistic experiments to side projects (Zone Eater, Hyperlink, Metal Ballerina etc.), does he now feel pressure to stay within a certain sound as Nmesh? “Occasionally I’ll feel a certain pressure to stay within the realm of vapor-related sound or methodology because that’s what’s expected of me from some of the vaporwave community, but then I’m like ‘fuck that.’ I’ll do whatever I feel like doing. People can either [stay] onboard or jump ship.”

He adds: “I like to think that most of my listeners know to expect inconsistency from me and are all about coming along for the ride, no matter how bumpy it gets.”