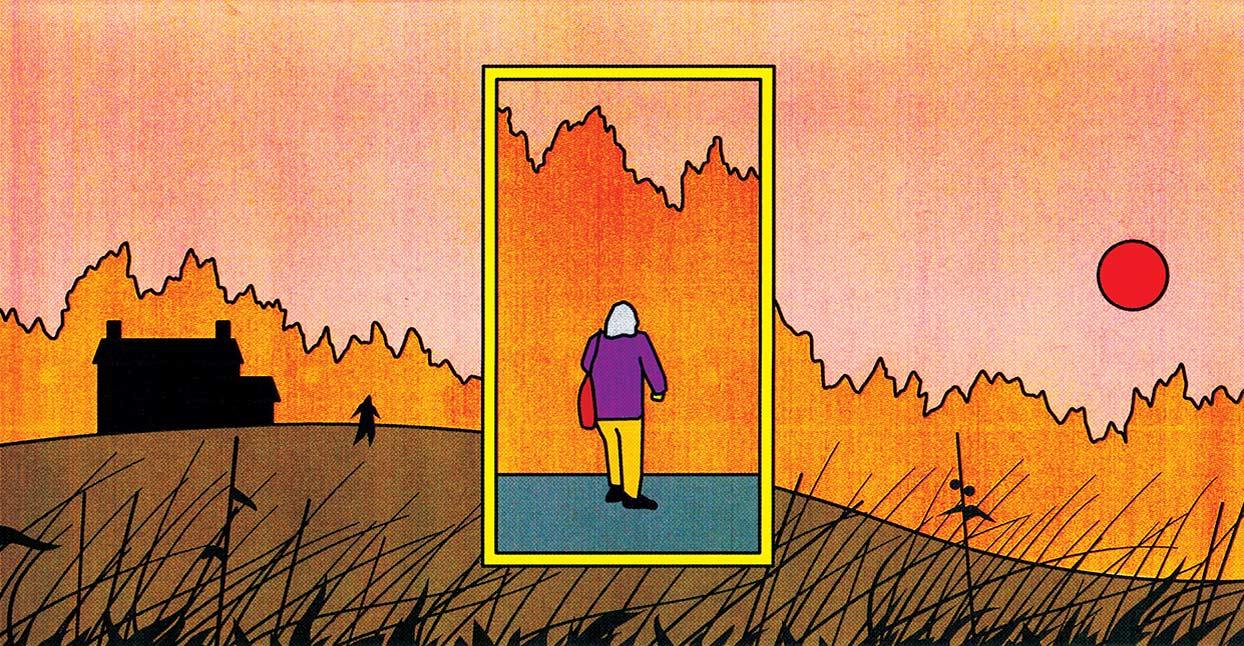 About three times a day, every day, Nina Keith receives a randomized alert on her phone, a friendly reminder that reads: don’t forget you’re going to die. “I find it very therapeutic,” she says. It’s not the sort of thing the 30-year-old experimental artist freely discusses at dinner parties, for obvious reasons. But to truly understand Keith’s reality, you first have consider her favorite word of the moment: groundlessness. It’s a way of thinking that applies to her non-binary and trans identity, her curiosity within music, and her overarching “This, too, shall pass” ideology towards life.

“Right now,” Keith says, “I’m trying to live as much as I can in this space of not knowing, and it being okay with not knowing.”

Nina’s latest album, MARANASATI 19111, is at once a remembrance of the past as it is a reconciliation with an opaque future. “Maranasati” refers to a type of Buddhist meditation defined by mindfulness of death and impermanence; 19111 is the area code of the North East Philadelphia neighborhood where Keith was raised, and where her “memory networks” associated with mortality initially developed. During her brief stint in high school, Keith spent several hours alone in a tiny rehearsal room, sequestered from peers playing guitar, patiently hitting random keys on the piano and “seeing what sounded good together.” She suffered from severe Tourette’s syndrome at the time, and dropped out shortly thereafter. But those solitary moments away from classroom judgments set the precedent for cultivating her future craft.

“There is something magical about the piano when you’re holding the sustain pedal down,” she says, “The strings are all resonating and guiding you to figuring out what chords make sense.” To this today, Keith still does not know the names of the progressions she’s playing or how to read sheet music.

The conceptual material on MARANASATI 19111 predates Keith’s musical experiments. Two tracks that share the same haunting poignancy, “The Woods of America’s Unknown Child” and “In the Woods We Both Saw it, Weren’t Dreaming,” allude to a patch of land down the block from her childhood home. The local kids, she recalls, would refer to the site in a “playful, spooky” manner, joking, “Don’t go back there, the Boy in the Box will get you.” Around the time Keith stopped believing in Santa Claus, she discovered the Boy was not an urban legend, but one of America’s longest running murder mysteries, unidentified and unsolved to this day. “Death has been presented to me since my youth as this mysterious, magical force. That’s made it softer to untangle,” she says.

Keith has also been pulling apart her notions of gender and identity. She’s had gender-affirming surgery, and she began taking hormones simultaneous to recording MARANASATI 19111, about a year and a half ago. Her confrontations with mortality at an early age helped her reflect on this process of becoming. “There is a groundlessness inherent to death that has been necessary for me to stay in touch with being a trans person, sort of feeling like a vessel between two different bodies,” she says, “I don’t need to land anywhere.” Nina frequently hesitates, scattering pregnant pauses, throughout the conversation. At one point, she apologizes for “rambling,” and notes how restrictive individual words—developed within a transphobic and cis-normative lexicon—can be in their connotations and implications.

“I think trans people, for the most part, live in these environments where we need to explain ourselves,” she says. “I’m in a space right now where I don’t want my music to have words, because I have not been able to find the language to express myself in the past two years.”

That’s why her album’s pensive piano harmonies, laced between found-sound recordings of bird chirps and the metallic jangles of scrappers (people who collect scrap metal for money) pushing around their shopping carts, are rich and expansive. She says that so much vocabulary, like the term ‘non-binary,’ remains in its infancy: “I feel like 100 years from now, future generations will have a lot more to work with but, but I am trying to make peace with the fact that language might not be there in my lifetime.”

Music, therefore, remains one of the very few realms Keith can communicate “without it being intellectualized.” The discipline prides itself on improvisation and experimentation based on pure instinct. As such, it’s able to capture the full scope of her tribulations in a way that results a more visceral sense of understanding than a mere sentence ever could. If Keith needs a very specific texture to get an emotion across, she builds it from scratch with a modular synthesizer. “There is likely some link between my obsession with finding sounds that don’t exist because I’m trying to work through my identity through words that don’t exist.” she says. Where language fails her, music does not.

In spite of these limitations, “groundlessness” is a rare word that accurately conveys her various states. It’s the calm she feels meditating on the reality of death. It’s the sense of alignment and purity when her fingers are on the piano keys. In Keith’s words, “it’s just this magical feeling of seeing through all of the bullshit.”