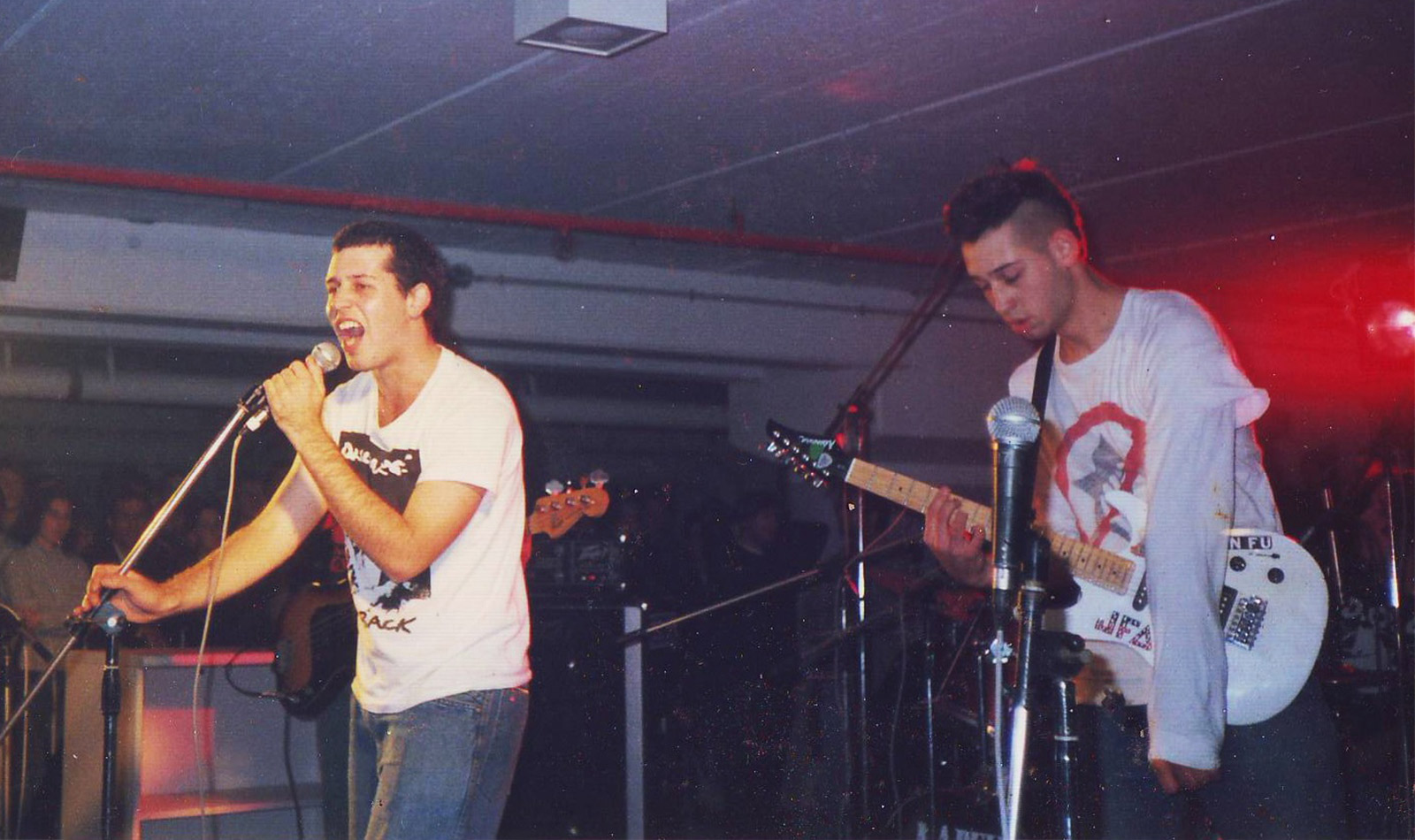 In some ways, not a lot has changed in Israel over the past three decades. The threat of regional war is still constant. Israel still occupies the West Bank and Gaza Strip—land that belongs to the people of Palestine. The Palestinian response to living under this military occupation continues, and violence turns to violence turns to violence. Since the first intifada—Arabic for “uprising”—started in 1987, more than 12,000 Palestinians and 1,500 Israelis have been killed, with many more thousands injured. In 2000 a literal wall was built by the Israeli government along the border, a move that has isolated the Palestinians even more.

While smartphones and the internet, in general, have opened up much more access to the Palestinian people and their plight, it has not resulted in any lasting policy changes. There are lots of reasons for that, but it would be impossible not to heap some of that responsibility on the man plastered across the cover of Israeli hardcore band Nekhei Naatza‘s 1997 LP הצדיעו למשטר החדש (Hail The New Regime): Bibi Netanyahu.

Let’s back up a little. The band’s lone full-length LP came out in ‘97 on the Milwaukee, Wisconsin-based Beer City Records. That was the same year they toured the United States alongside USF (Urban Skate Fanatics) who they shared members with, the first Israeli punk bands to do so. It was also the year they broke up. Nekhei Naatza—the name is vaguely translated as “Blasphemy Crippled” and, like many band names, doesn’t really mean anything as much as it sounded cool at the time—first came together at the beginning of that decade in a high school bomb shelter converted into a practice space in northern Israel, just a few miles from the borders with Lebanon and Syria. The original lineup consisted of two sets of teenage brothers: Yonni and Oded Tal and Federico and Santiago Gomez. All of them had spent a significant amount of their childhoods overseas. They played their first show in ‘91, putting out a demo tape not long after that.

Although their recorded output wasn’t extensive—demos, a split tape, the aforementioned LP, two 7″ records, and a number of compilation tracks—the band’s impact on Israeli and worldwide punk was monumental. A discography spanning their entire recorded output was recently released by Taklitim Cholim, a new Israeli label run by Haim Binyamini, who was also in the post-Nekhei Naatza band Dir Yassin.

What made Nekhei Naatza so special was very much the basic nature of what they were doing: playing loud, angry, political punk music in a scene that until that time was generally bereft of such things. Although there had been punk bands in the country stretching back almost to the dawn of the genre in the late ‘70s—Cholera is generally considered one of the first, originating in Jerusalem around 1982, though some of the music put out by new waver Rami Fortis a few years earlier definitely qualifies as well—they were few and far between. Nekhei Naatza was also, as vocalist Federico Gomez says, “The first band [from Israel] to became actively engaged in the international DIY hardcore punk scene.”

There are certain aesthetics typical to punk around the world in the ‘90s that Nekhei Naatza shares, but the lyrics and the anger inherent in their music are entirely Israeli. Politics in Israel are deeply woven into all aspects of society. What isn’t dictated by Jewish law—the foods found at almost all grocery stores and most public transportation not running on the Sabbath are two examples of this—is dictated by politicians. The line between those two controlling factors is, perhaps not surprisingly, quite blurred. All Jewish citizens of the country are drafted into military service at age 18, and getting an exemption is very difficult and can affect future education and job prospects. Saying no to any of the fundamental pillars of the young country is considered downright traitorous.

In the liner notes to the discography, Gomez explains that “Just as we started getting into punk the first intifada erupted, bringing the oppression of the Palestinian people and the injustice of the Israeli occupation into our consciousness, and inspiring not only some of our lyrics but also the direction a tentative Israeli punk scene should aim towards.” They decided to oppose the state in every way possible and raise awareness in Israel and elsewhere about what was going on, be it through music—there really is no gray area to songs like “רצח עם שלם (Entire Genocide)” and “דת גזענית (Racist Religion),” both of which came out on their 1994 7″תתכחשו ליהדות (Renounce Judaism)—publishing zines about animal rights and other topics, and going to countless protests. This was a very different approach to politics and subculture in an environment where, as Gomez put it, “punk was something to do until you got drafted to the army.”

What impact did all this have? After all, as mentioned, seemingly little has changed in Israel since the band broke up 25 years ago. That’s illustrated perfectly by the fact that Netanyahu was only voted out of office in 2021 after 15 years total spent as prime minister. Violence is still constant, apathy widespread, and the inevitability of war is almost accepted as normal by everyone in the region. There are some cracks in that wall, however, and if there’s going to be change, it will have to come from the youth. Although punk occupies only a small fraction of the subcultural landscape in Israel, it is part of a large movement that includes so much of what Nekhei Naatza and their contemporaries in that scene were trying to create.

So perhaps it’s better to instead speak about influence. Current Israeli hardcore band Jarada cites Nekhei Naatza, Dir Yassin, and others from that generation as being a huge inspiration. It’s easy to hear the direct musical and lyrical connection between a song like “אם ת’ימני אז עבדו עליך (If You’re Right Wing Then They Fooled You)” and anything from Nekhei Naatza’s discography. Still, Gomez finds it troubling that bands like Jarada are addressing the same problems as Nekhei Naatza did decades ago. “It is harder for them. Despite the rage we had, we also had the luxury of hope that things would get better,” he says. “I think that the people involved in the last 15 years have no such luxury—the feeling may be that things are beyond fucked. Many people perhaps act from a moral imperative but [do so] knowing they’re screaming at a wall that is never going to fall, to paraphrase Minor Threat.”