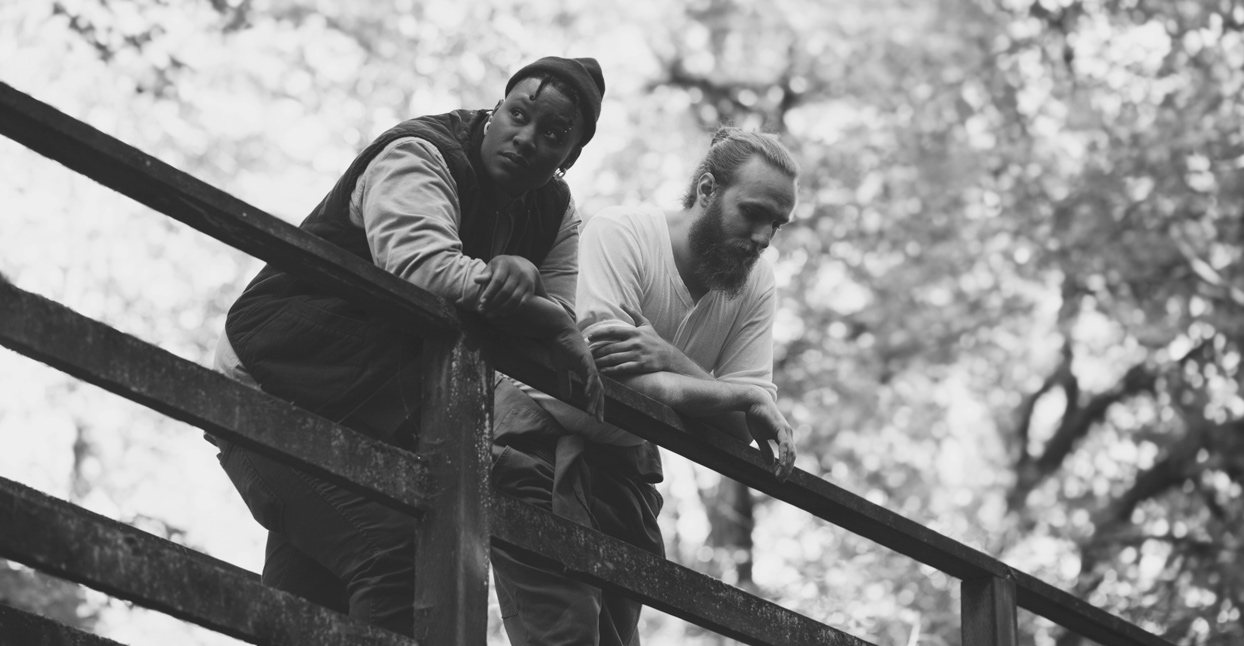 In the 1950s, the U.S.S.R. cut itself off from the Western world. They were less than a decade removed from the loss of over 20 million people, more than any other country, in the deadliest war in human history. Those who survived yearned for an escape through jazz, blues and rock from the outside world. Some turned to “bone music”—the local shorthand for a discovery made by music-listening pioneer Ruslan Bogoslowski. Bogoslowski had learned how to etch music into x-rays of people’s battered skulls, infected lungs, and broken ribs. Eventually, “bone music” evolved into a massive bootlegging business that was outlawed in 1958 and essentially shut down altogether before the next decade began.

Portland, Oregon artists The Last Artful, Dodgr and Neill Von Tally took this concept—the mood, tone and desperation of the era—and flipped it to create their latest collaborative effort, Bone Music. It’s a love story, centered on a blue-collar worker who seeks guidance from her fellow proletarian about how to survive. Bone Music brings to life an era, a story, and a listening tool colored by death.

We spoke with Neill and Dodgr about why they created Bone Music, censorship, method acting and creative expression.

Neill, you came up with the concept of Bone Music. What made you want to revisit the mood and tones of the Cold War?

Neill Von Tally: Aesthetically, I found bone music very interesting. The records being cut into x-rays were both visually stimulating and also a bit telling of the times. You have the Cold War and censorship, and here you’re playing music on x-rays—on bones. It feels a bit death-defying, in a sense. It’s sort of transcendent. Initially, when we were writing, we didn’t set out to make an album called Bone Music. A group of songs began to apply to that aesthetic, so we decided to take it further.

Which songs? Were they songs that landed on the album?

The Last Artful, Dodgr: Absolutely. I would start off with “LLC.” “LLC” really is the origin for our blue-collar story. It started off as just an allegory for the music industry: a veteran rapper (played by Mike Bogan) talking to a rookie rapper. But I placed it in a coal mining setting, which never happens in rap. Like, who—?

Dodgr: It doesn’t happen. That really helped us construct the rest of the project.

Von Tally: [“LLC”] really pushed it into that blue-collar area, and made it very clear that it was going to be an album about those sorts of struggles—about hard work.

With that song specifically, I think there was an overruling tone to it. But I think it’s important that you guys—especially so early on in the album—established there was a separation of power between the character and those in power.

Dodgr: You just gave me the chills, ‘cause you pointed something out that was very important in the album. Mike Bogan’s character [in “LLC”] plays my best friend who gets me the job. He’s telling me to watch my step, and not to think that we’re friends [at work]. So everything that I thought was true prior to that moment was not.

Once you establish you were going to make this type of record, did you have doubts this was something people would gravitate toward?

Von Tally: When you write a concept record that’s not necessarily supposed to be a pop record, or when you’re trying to write something that’s timeless that’s not necessarily with the trends, you have a concern that this won’t land the way you want it to land—or maybe that the intention of our story won’t really be understood. We did our best to contextualize it. I also feel we did a good job of writing songs that are pop-centric. This is a movie, in album form.

Dodgr: I think by challenging the listener, it also forced us to challenge ourselves. We both want to be extremely successful at this, don’t get me wrong, but this is a project we know will go over a few people’s heads, and maybe they’ll have to come back to it in a few years to completely understand it.

Von Tally: The moral of the story, or the message in it, is something that’s rather ubiquitous. Most people struggle in their personal relationships and with the monetary reality of the world we live in. The record really has something that pertains to most of the people that have ever lived.

You guys made Fractures together, and there are themes that carry over [to Bone Music]. Thematically, do you think the tone of Fractures helped inspire the writing for Bone Music?

Dodgr: Absolutely. I would really point to “Foreclosed” as the inspiration for the romantic part of the album. “LLC” set up the blue collar scenario, and “Foreclosed” set up the romance to let you know not everything is not good gravy.

Once you settled on the concept, Neill, did you make the beats for the mood, or did Dodgr say, ‘Hey, this is how I want this story to play out,’ and you made something that matches that.

Von Tally: As far as the sound design was concerned, the further in we got, the more we tried to make it sort of minimal and cold-feeling without abandoning the listener in that space. Once we were about seven songs in, we started to write out what each song was about, and what in the story arc they might pertain to, then we filled in the pieces from there.

Dodgr, did you use your past experiences writing [the album]? Or is this a character you displaced yourself into?

Dodgr: I definitely used pieces of my past to dial into this project. On “Housee,” I originally got the idea from something that happened in my college years. Someone I was kind of seeing had a boo at the time, and we were at a house party. Things got crazy, we stepped out to the bathroom and [her] boo was still in the main room partying still.

If there was one song on the project you would point people toward to warn, ‘This is what you’re getting into,’ what would that be?

Those seem to get toward the more dire points of the character’s life.

Dodgr: We could easily point out something like “Good / Gravy,” where there is a light at the end of the tunnel, but that’s not what life is about.

Von Tally: On a big part of this album, we’ve had to realize this American dream, this idea you’re going somewhere and then you get there and everything is good from that point on, doesn’t really exist. You’re always having to work. Life is always a set of problems that you need to solve.

Dodgr, everything you do has a precision and depth to it. Is that a skill you consciously developed, or did that come to you when you started making music?

Dodgr: That’s just me. I think through everything ten-fold. I want everything to connect the way it’s supposed to. I hate non-sequiturs in music. I hate listening to a rap song and somebody go from talking about bitches to talking about their how awesome their mama is. That doesn’t make any sense. Let’s make sure every line is connected, and is a precise as you just pointed out because I want people to understand it. I want it to always be smart. I want it to represent me.

Neill, I read in the Bandcamp description of the album that you recorded traffic, you recorded beating a lead pipe against plastic bags with metal in it. What was the most obscure thing you recorded to put inside this album?

Von Tally: We had a snow storm a little while ago, and there were a lot of ridiculous icicles that were growing because it started to melt, then [the snow started] coming back, so I ended up breaking off a bunch of icicles and [recorded] playing drums with them and throwing them so they would shatter. You can find them mixed in with hi-hats and snares. A lot of the percussion on the album is an amalgamation of a real snare and something from the real world. There’s also a field recording that I found from when I let my engineer borrow [the field recorder] that I thought was rain, but it turns out it’s him cooking. There’s multiple tracks where there’s a sizzling rain sound, and it’s actually bacon being cooked.

Your project took place in a post-dystopian world. Right now, in the year 2017, there are people in power who get easily offended by art and might start attacking it. Do you guys feel art and expression are threatened nowadays?

Von Tally: I think it’s a fair point to say this era will breed a lot of self-expression and a lot of exploration in art because of the angst and frustration people are feeling. But I would be remiss if I didn’t admit some of the current political goings-on are concerning to me, especially regarding the potential for censorship. It’s not to say that people will stop making art, or that this will be a dead era for art. But I am concerned about what could potentially happen to radio or the internet. Censorship is alive and well in certain parts of the world, and it’s not beyond the realm of possibility.

Dodgr: I think now is the time for everybody to be as vulnerable as possible. Put yourself out there, because without vulnerability, without expression, we won’t be able to fight this administration or anything that’s going on in this world that’s oppressive.

Von Tally: [Art] is the main way to fight oppression.

Dodgr: It is the only way, really. By speaking.