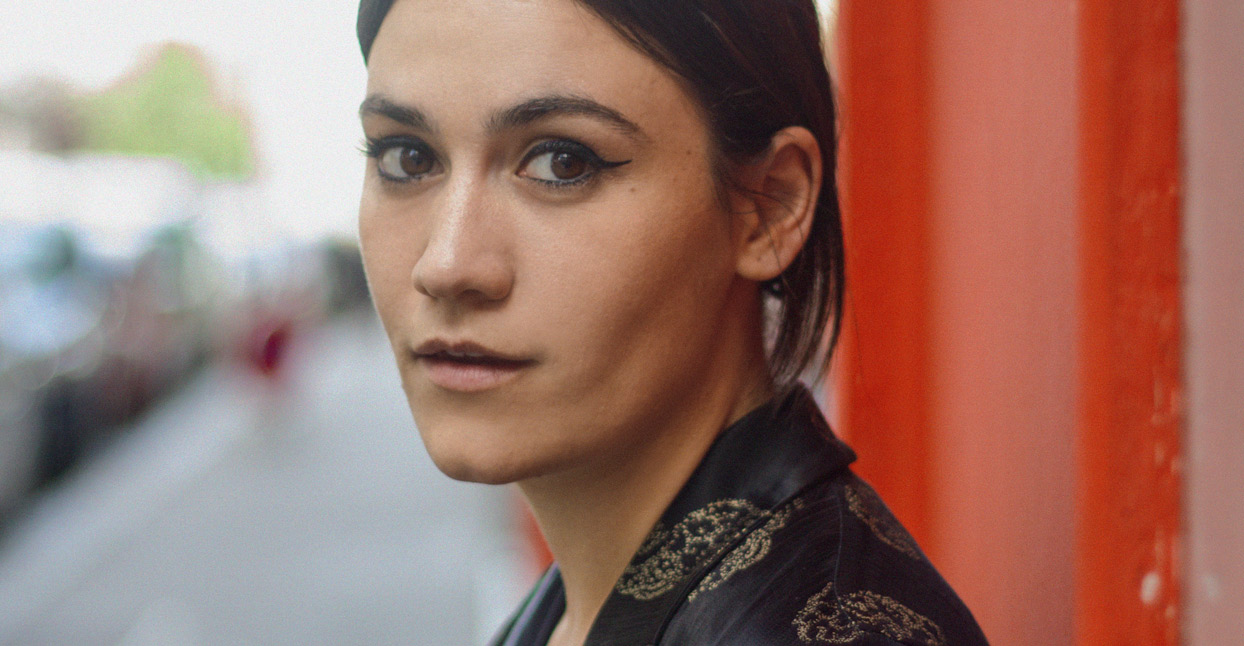 It’s only been four years since U.K.-based singer-songwriter Nadine Shah released Love Your Dum and Mad, her mournful full-length debut, but in those four years, Shah has gone beyond that album’s grim, dark rock, expanding into music that is brighter and more immediately melodic while still retaining its post-punk edge. On her latest, Holiday Destination, Shah confronts antipathy and xenophobia, but also addresses the way those attitudes can personally impact other people.

Though Shah’s three albums are musically quite different, they’re united by her haunting voice. That voice, a rich alto that’s both bottomless and shimmering, projects strength and vulnerability in equal measure. It is deep and dark and warm all at once. She sings achingly about loss and suicide on Love Your Dum and Mad, with poignant passion on Fast Food, and with measured political anger on Holiday Destination. All these feelings stem from Shah’s profound sense of empathy, whether it’s for her own departed lovers or for refugees arriving in Turkey.

We spoke with Shah about the rise of nationalism around the world, her new record, and how to take care of oneself while working for mental health reform.

One thing that inspired this record was an article about vacationers to Turkey complaining about refugees ruining their holiday. I know that you’ve done many kinds of outreach, and I wondered if you think there’s any way to reach people who feel the way those tourists do? And how do we have those conversations?

Anytime that I receive any kind of negative comment, which is sometimes racist, the last thing I ever do is respond with aggression—because if I respond with aggression, that’s just going to reinforce somebody’s belief. One thing is just trying to understand people and opening up a dialogue. Going ‘You’re wrong, this is terrible’—you can’t say that. Instead, say to them, ‘OK, I don’t agree with you, but can you tell me why do you think like that?’ We can try to understand them properly, and we can have a conversation, and then provide them with facts which negate what they’re saying. I think it’s really only through proper empathy [that we can reach others], and that may sound like a really hippie comment, but I think kindness can inform most change.

Are you anxious about touring now, given the fact that feelings like this seem to be on the rise?

I’m an independent artist who is maybe played on one radio station. It would be different if I was somebody like Adele, if I was in a position where I was extremely popular and I was making these kind of statements—that probably would make headlines. I don’t think I’m the kind of artist who would do that. Still, in the back of my head, I am very worried, and a little bit of me is quite nervous about a negative response. I’ve seen tiny things on Twitter. I’ve had the odd idiot say something pretty gross to me. I don’t really want to occupy my thoughts with that too much.

There’s a song on your new record that I’m really curious about, the one called ‘Evil.’

That one’s meant to be about the outsider, essentially. So that could be referencing one’s own mental health, or somebody who has moved to a new country and isn’t accepted within that particular society because they come from some foreign land. It was mainly inspired by a poem by Philip Larkin called ‘Days.’ In that, when he speaks about the day, the day represents normality, and anything that’s outside of the day is considered not normal. And he says, ‘Where can we live but days? Ah, solving that question brings a priest and a doctor in their long coats running over the fields.’ Which means that if you don’t exist within this routine format of the day, you don’t adhere to a certain religion and to be questioned by science as well. It’s a short poem, but within that he says so much and it’s really beautiful.

He’s very good at putting a lot into a compressed space, and it’s usually very pessimistic.

He’s a grumpy, grumpy old man. I love him.

When you were touring for Love Your Dum and Mad, you said that it bothered you when you would sing about these really difficult topics and not feel anything. You said you would rather feel a lot. Has that been sustainable for you, or have you had to find a distance from which you can feel without being too drained by it?

It’s a weird one. I think what happened on the first album was that I felt too much, actually. My older brother, Karim, he came to one of my first shows for my first album when it was just me at the piano. He was saying it was one of the most disturbing things he’d ever seen. He said, ‘There you were, my little sister, pouring your heart out onstage, in tears, and there were people applauding it.’ He said he wanted to stop the gig and be like ‘Everybody go home! Nothing to see here!’ and then take me home and be like ‘Nad, have a cup of tea and sit down’ and look after me. But I think there was a lot of that on the first album.

I was drinking pretty heavily, because it was quite harrowing to open up old wounds and relive them all the time. There was a bit of me taking advice from some older musician friends about stuff, and they were saying, ‘In order to have proper conviction, you can’t just blank everything out. You don’t want to go on muscle memory ’cause that’s not you doing your job properly. But there has to be a bit of you that looks at it practically and also looking at how sustainable that is.’ I think it can be a dangerous thing for artists sometimes when you’re making work that is so personal and quite harrowing for one’s own mental health. It can be quite destructive. But just little things like I started drinking a lot less than on the first album and adopting almost a persona onstage.

People who do a lot of outreach or social work or activism often experience a kind of compassion fatigue. You’ve been very involved in the fight for better mental health, and you’re involved with your fans in addition to addressing your own struggles. Are you concerned that you’ll get compassion fatigue, or burn out and not be able to maintain your high level of empathy?

[These] are subjects that I’m so passionate about, but there are times when I find it unbelievably emotionally draining, and sometimes I wish it wasn’t. Even tomorrow, I’m going to go up to this city, Holt. It’s a city in the north of England and I’m on a panel talking about mental health there. I’ve lost three of my closest friends who committed suicide. Took their own lives. It’s not a crime; it shouldn’t be called committing suicide. They took their own lives and they were very, very unwell. Who knows what might have happened if the government had spent more money on mental illness? There are moments where it’s very exhausting and mentally very draining. But there’s an over-riding passion there and a duty to my friends and to other people as well that I know who are suffering. It’s something I’ll be continuing to do until I croak.