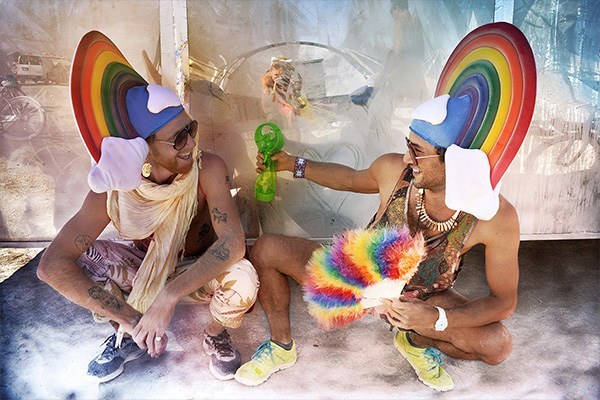 “Because there’s so much more globalization, influences run deeper across cultures, so you get different kinds of mutations and variations on traditional music.”—Thomas von Party

The way they explain it, DJs and producers Thomas von Party (from Montreal) and Sydney’s Angus Cruzman (a.k.a. Dreems) are on a mission to “multiply your mind.” Multi Culti, their globetrotting, New Age-leaning, psychedelic/electronic music imprint embraces folk instrumentation and the mystical traditions of world cultures. The duo joined forces in 2013 after discovering they shared mutual love for the esoteric—in both dance music and the wider culture—as well as a fondness for the energy of global dance parties. Today, they continue their intrepid quest for illuminating sounds to soundtrack meditation, dancing, tripping, or healing.

On summer solstice, June 21, the label will release an elaborate box set, the double-disc Moon Faze Sun Gaze, which is a follow-up to their lunar and solar-themed series of EPs. The 23-track outing is a sonically-rich experience, a journey into contemporary psychedelic electronic music in all of its kaleidoscopic forms, layers, and textures. There’s the growling didgeridoo drone of London’s Zsou’s “Admiral Byrd (Dreems and Peret Mako Remix).” Lithuanian act Manfredas’ “Glaswalk” is laden with hypnotic sitar hooks and the sound of rubbing steel. Japanese producer Zongamin’s “New Tribe” is a crystalline trance track with raga flair; Berlin-via-Tel Aviv’s Moscoman puts bongos and xylophones to good use, and samples a woman discussing a self-help book in Spanish. Multi Culti’s world is a mirage of constantly-shifting sounds and ideas that trek across time and space.

“We’re just having fun being hippies,” boasts Thomas Von Party, explaining the spirit of the label. We caught up with him to discuss the lure of electronic music culture, the magic of outdoor parties, and the forces that can unite sounds from around the world.

Multi Culti is run by you and your partner Angus Cruzman, who lives in the opposite hemisphere. How was the label born?

We have both been involved in the industry for a while. I’m based in Montreal and he’s based in eastern Australia, but he’s moving to Berlin this summer. We went to Burning Man together, where we had fun doing things together and talking about music. So I guess it’s a sequence of things; it’s a creative collaboration born out of friendship.

There are producers who are from different continents in this upcoming double-disc release. Talk to me about the album’s cross-continental integration?

The compilation itself is kind of a big one. The idea came because we have a lot of contacts—we found a lot of cool tracks from artists who don’t necessarily have the resources to do a full release, but [in some cases] they have one or two songs that you love. We had so much material that we wanted to get out. It is pretty amazing when I look down the list and see where everybody is from, and how many different influences there are from across all the globe. We have producers from Japan, Israel, Ecuador, Lithuania, Holland, Ireland, France, Switzerland, Australia, Germany, Argentina, Mexico, and a Berlin guy [based] in Brazil. I mean really, just all over the world.

Your label has a really beautiful, creative aesthetic that incorporates images of cosmic objects, like moon phases and eclipses. I’d love to hear a little more about the visual aspect of your music.

That was something we really put a lot of work into. For the compilation, the music was ready for a while. We just kept delaying it because we weren’t happy with the artwork. We have a designer who’s Australian named David Horn who we work with quite a lot. Angus and myself would find references and images we liked, and we’d go back and forth. We worked with Ventral is Golden, and they did the collages. We gave them tons of references for the digital releases, and returned with collages and graphic designs of the moon and sun. We wanted to use something that was elaborate, and create the sense of another world, another cult, visually and mythologically. It stays looking fresh, and then, of course, there’s the box set which is pretty crazy.

You’ve released a trickling of EPs that align with astrological happenings, like the equinox and the solstice. How did you go about pairing these universal events with your music?

We’ve been thinking about this project for a while, because we’ve been building up the material. We just took our time with everything. I’m not going to pretend that we’re heavy-duty into astrology, but there’s still something to it. There are those times in the year which are sort of meaningful, you know? Obviously, seasons have a big impact, especially in Montreal, where it’s an extremely seasonal place. Winters are super long, so when spring finally comes, it’s great. It just felt like a nice time to launch everything.

You mean you’re not Wiccan?

[Chuckles] No. I enjoy things that people believe in wholeheartedly, and I appreciate it in a certain sense, but I wouldn’t say I’m a die-hard as far as that stuff goes. Although recently, a friend gave me a detailed astrological reading, and it was shockingly accurate—like, frightening. You know, when [astrologers] ask you what hour you were born? I’m a Gemini, but the full reading was crazy. The first two pages was me to a tee, and not necessarily a flattering version either [laughs].

I always think of this idea that’s “as above, so below,” the fractal nature of things that there are these cycles that repeat in nature. There are all these psychedelic concepts, even if it’s a little half-baked. We were happy to align some of these things [with our releases].

In your experience working with artists from different parts of the globe, what interests you most about other cultures whose music has a mystical element?

Broadly speaking, that’s part of the ethos of the label. But musically, there are so many interesting traditions. We’re steeped into the culture of electronic music. We grew up with a sense of mostly pop music from the ’50’s onward, or even classical. But then there’s “world” music, which is everything else. With Multi Culti, we’re certainly not going to pretend that we were the first people to come up with that idea. Because there’s so much more globalization, influences run deeper across cultures, so you get different kinds of mutations and variations on traditional music.

I can think of a lot of artists and labels over the past years that were quite influential, like Four Tet sampling cool African records, or the Cómeme label, who are based in Chile. Then there’s ZZK in Argentina. In Portugal, they have Enchufada, which is cool kuduro music. Warp Records has done some cool compilations. There’s a lot of interesting music in the last couple of years that really does incorporate musical tropes from different cultures.

What are some obstacles with integrating a little bit of the whole world into your music?

In dance music, so the biggest sin is things being too boring or formulaic. You could go to a party and it could sound like generic tech house from start to finish. There’s a world of music out there that’s really interesting and exciting that sounds new and fresh. There is an element of exoticism. There is an appreciation for something which we don’t understand, or something that feels different. I think that can be something that people get sensitive about, or say it’s appropriation. For me, it’s just a positive. Anything that piques your interests or inspires is a good thing.

Hopefully, through this compilation, people get inspired to check out some of the roots of the artists that we’re releasing, and explore or find something new or strange in music that they wouldn’t have found out about otherwise.

How do you best experience music?

For me, I still prefer the center of it all, which is the party. I’m not that highbrow. I like parties, and some of the music that we do is little bit more chill or downtempo. Maybe that’s a bit deceptive to some. Angus and I are both essentially party DJs. We want to get people dancing, but we do it in a real arc, in terms of energy levels. To me the ideal is a good, long outdoor party. That to me is just magic, you know? The outdoors! People’s desire to get out there and have this experience, mingling with the reality of the elements, or whatever they may be feeling—that slightly uncontrolled aspect.