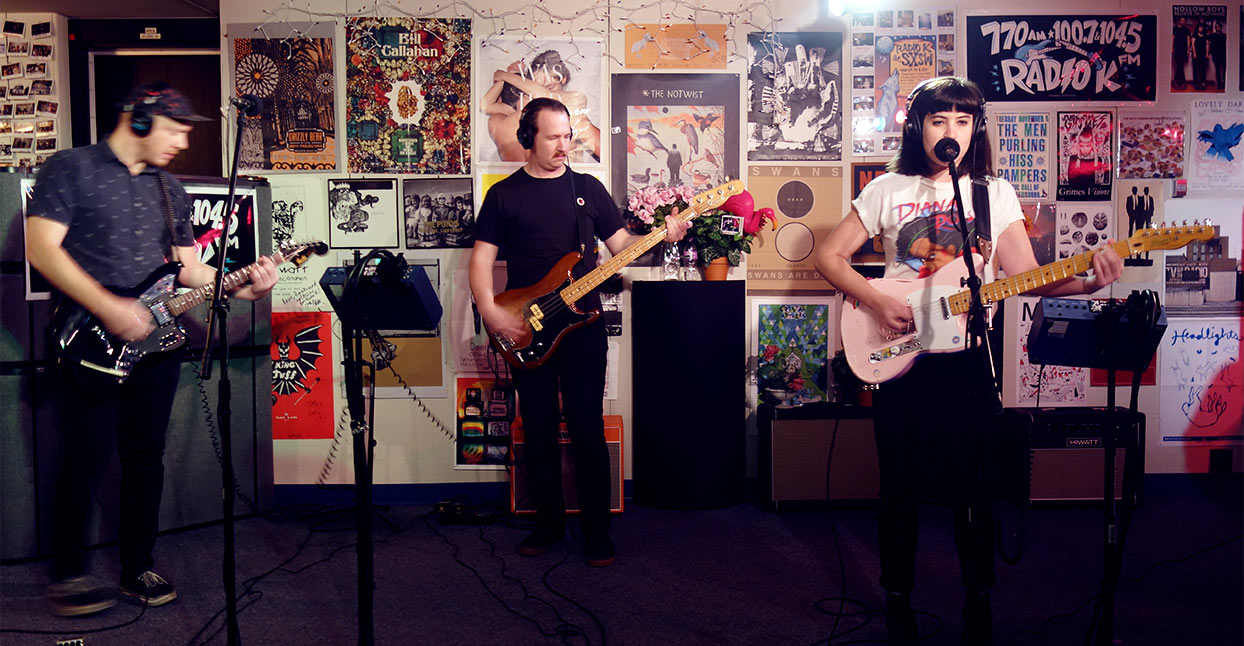 Garage rock can be a beginning, middle, and end for many who make it, but Monica LaPlante—a 25-year-old singer-songwriter and guitarist—isn’t interested in cookie-cutter revisionism. Her 2013 debut, Jour, has a bright indie-pop feel, steeped in 1960s allure. But as the name of her new Noir EP makes clear, she’s darkened considerably—and gained substantial depth along the way. Noir’s songs, particularly the locomotive (and ridiculously catchy) “Hope You’re Alone” and the harmony-drenched “From Your Shadow,” are rich and endlessly playable. Each one occupies its own highly-specific sonic space, and the entire EP showcases a formidable talent coming into her own. LaPlante spoke with Bandcamp’s Michaelangelo Matos at the Amsterdam Bar in downtown St. Paul on a drizzly fall afternoon.

Are you a Minneapolis native?

I’m actually from Rochester, about an hour south.

Was there a scene there, per se?

Not at all—not a lot for the rock music there. I had a couple friends who started a jazz trio down there, and even [Twin Cities-based coffee chain] Dunn Brothers kicked them out. Nobody wanted music there at all. It was dead. The Mayo Clinic has started throwing money at the city to make us cool again. But yeah, there was no place to play—you’d practice in your friend’s mom’s basement.

I went to private school there. I was a ‘scary kid.’ I read Marilyn Manson’s autobiography. Shortly after that, the English teacher began assigning us books to choose from. Some of my friends and I would find ways to mention him doing something mundane as a passing character in creative writing assignments. It grew to be a very weird inside joke between my group of friends. It got to a point where people were like, ‘You need to stop bringing up Marilyn Manson.’ By that time, he was past it—he’s on VH1 talking about his life. I was obsessed with the weirdest music I could think of just to scare the kids at school.

I hung out with a friend and she really wanted to cover Evanescence songs. I was like, ‘Well, I have a guitar. Sure, I’ll do whatever.’

How did you acquire the guitar?

I got an acoustic guitar probably when I was in seventh grade. I’d been in band forever, playing the saxophone. I had to bargain with my mom to buy me an electric guitar if I went into jazz band, which was at six or seven in the morning—some ungodly hour. But I got to play the guitar in jazz band. I was like, ‘Wow, this music goes pretty fast.’ So I’d mute it and pretend to play. [Laughs] There was another kid playing guitar, too, so between the both of us, we got half the notes right.

Your new EP is called Noir. There’s a video on YouTube called “How to dance like a ’90s Goth.” Do you?

[Laughs] To quote Ned Flanders of The Simpsons, ‘I might waggle my finger to something.’ Unfortunately, if I’m drunk enough to dance, it’s more comparable to the “Elaine Benes.”

Did the title of Noir come before the EP or did the EP dictate the title?

The title came first. I wrote my first record [Jour] and I had no idea what to name it. I was going to music school [at McNally-Smith College of Music] at the time, where they want you to be creative about titles. It’s art school with—I don’t know if I dare say—more weirdoes. Kids would show up in their personas. You never knew what kind of music they made. A kid would show up in a tuxedo. There were the steampunk kids. One guy would show up in a full-on cop outfit. He had the kneepads. He dressed like a Village Person.

You’re sure it wasn’t a security guard?

[Laughs] No, but there was a lot of: ‘Student or homeless person?’ That’s the game you’d play.

So Jour was basically a school project?

I went to school for composition. It’s very by-the-book. The rhymes are all syllabically together—no slant rhymes. They just teach you the basics and you have to fit that. They tell you, ‘Write a song in this style.’ I was stuck in that mindset still. But the student in me said, ‘This is a pretty bright-sounding album, and I’ve always wanted to write a rock album—so why don’t I call this one ‘Day’—because Jour is French for day, or French enough—and then I’ll just write a really dark album.’ It was actually easier than I expected it to be.

You just had it stored up?

Yeah! It’s meant to be a counter to my first album. I’ve always really wanted to write darker rock music, and it’s just taken me a while to figure out how to do so. Noir’s a lot more emotionally free. It’s a lot of being OK with feeling the way I do. It’s mostly personal. It’s a little biographical, I guess. I tried to write more about feelings and situations.

When you wrote “From Your Shadow,” were you hearing the harmonies as you wrote?

Totally. I’ve always been obsessed with girl groups, that ‘60s Phil Spector Wall of Sound. So it made sense to me that everything I do have harmonies. Even if I’m thinking of writing a song, I’ll just pull up production techniques, or, ‘This bass sounds good because there’s an organ phaser on it,’ or something. Not necessarily with Phil Spector—just with anything. But at that point, I was in that Brill Building mode of writing, where everything is structured, everything is by the book.

“Do That to Me” is very PJ Harvey.

[Laughs] Thank you. That wasn’t on my mind, actually. I’d been listening to Tender Buttons by Broadcast, that song “Corporeal.” That’s actually one of the lines in there: [sings] ‘Do that to me.’ It’s a play off that, almost my own version.

Did the hook on “Hope You’re Alone” announce itself right away as a hook?

What happened is there was a guy that I really liked. As guys do, they go, ‘Yeah, I’m going to go to the show. You should go, it’ll be fun.’ It’s not an invitation at all. But when you really like someone, you’re going to take it that way. It was a $30 show at the Triple Rock [Social Club, in Minneapolis]. Somehow I managed to work merch for the show so I could get in for free—the ever-so-important merch person. I was talking and hanging out, and a person they used to date showed up. They ended up chatting and, with a group of people, they all left. Here I am, three whiskey-gingers later, selling T-shirts for a band I don’t really care about—I don’t even remember who it was. I was furious—and whiskey was involved, so I was super-furious. So I went home and I just wrote it. I grabbed a guitar and it just came out. It just kept repeating in my head—’I hope you die alone.’

What’s funny is that the first time I heard it, I didn’t catch the lyrics, so I thought it meant the opposite—I thought it was a song about a booty call.

[Laughs] No, that’s an angry song! And as angry and out of control I was about it, there’s a drilled structure in songwriting for me: ‘What kind of song is this? Is this AABA? Is this verse-chorus-verse-bridge?’ I need that, because it is still daunting to write a song. Everything is just an equation. I try to sit and play the guitar whenever I can, and see what comes out. Sometimes I’m like, ‘That’s a catchy little thing—that’s not going anywhere, it’s too plain.’ It’s a lot of messing around with certain lines for weeks at a time, seeing what comes out. And then there are times when it’s like, ‘I need a lot of money—I’ve got to work. I’ll get to that later.’ [Laughs]

You overdubbed most of the tracks on Noir by yourself, right?

Is rock the language you speak, as opposed to something easier and cheaper to make, like electronic music?

But the stuff you really reference is either way after that or right before it: Girl groups and Phil Spector predate that canon.

Yeah. In Noir, it’s more like Television or the Strokes. There’s a lot of Strokes in there. The opening line of “Can’t Stop”—I was like, ‘This is so Strokesy.’ I love the Strokes. Cate LeBon is a big influence on even “From Your Shadow,” especially the guitars.

Who are you listening to on Bandcamp?

Right now I mainly use it to listen to a lot of local bands. The one I’m listening to right now is Rupert Angeleyes. Those guys are really cool. Kyle [Sobczak] has a really great way of writing lyrics and expressing feeling. The production’s pretty awesome on that one. There’s a band called Lunch Duchess who’s really cool. The lead singer is the drummer—she has a Garth Brooks mic. On a more electronic end, there’s this girl Devata Daun. She and her partner Ryan Olcott—he was in that 12 Rods band—their live setup is super cool. He usually does most of the mixing, and she’ll play synth and do live vocals, and he’s bending tape live.