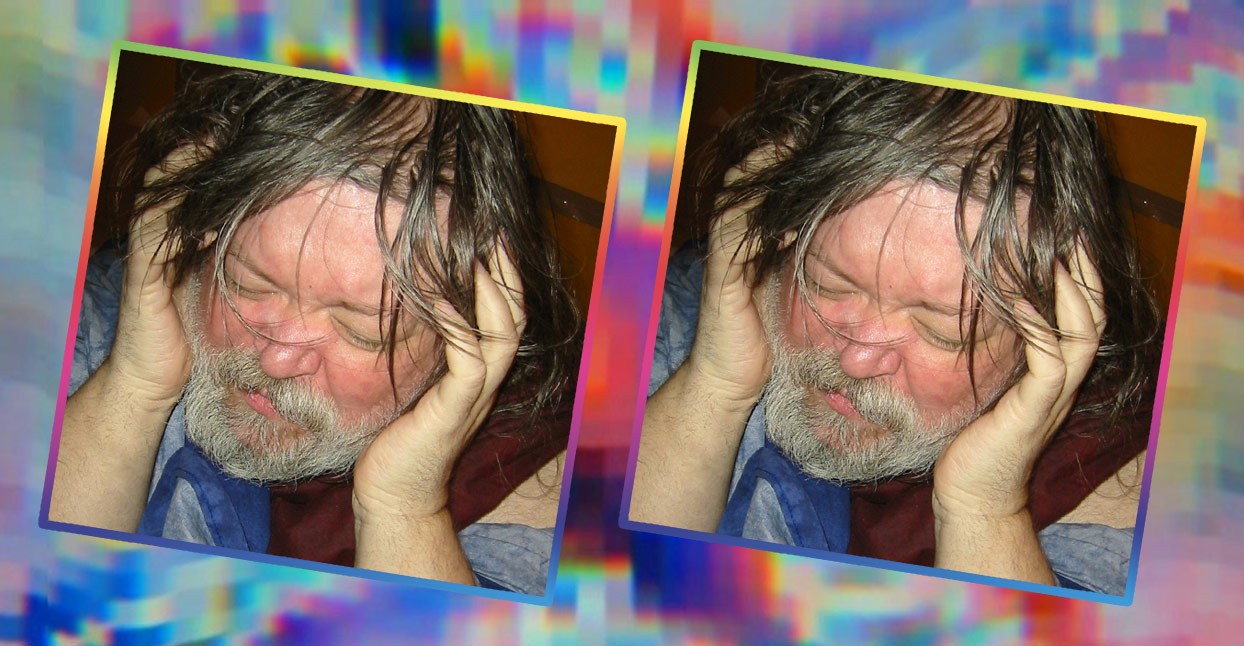 “For the uninitiated, this is the guy who lives under your bed and creates soundtracks for your worst nightmares.” That’s how writer Mick Mather described Minóy in 1987, a year into the artist’s brief but prolific career in the noise underground. On over 100 releases, Minóy made much more than just scary sounds. But Mather did nail something essential about this enigmatic recluse. Born Stanley Keith Bowsza in 1951, Minóy didn’t literally live under a bed, but he rarely left his house, and his work felt like it belonged in dark, secluded corners.

That mystery is what first attracted Philip Klingler—aka composer and sound artist PBK—to Minóy’s music. Klingler was so intrigued by a review of Minóy’s 1987 tape Landscape With Serpent that he quickly ordered it and other albums straight from the man himself. “I’d listened to some experimental music before I heard him,” Klinger recalls. “But his work was so unusual, so outside the range of my listening at that point, there was almost a magical feeling to it—definitely otherworldly.” Klingler’s fascination remained so strong that now, nearly a decade after Minóy’s passing, he is the voluntary steward of the artist’s vast catalog, archiving it on a Bandcamp page named after his original label, Minóy Cassetteworks.

Listen to the releases that Klingler added to the page since launching the label in 2017, and you’ll soon hear what attracts him to Minóy’s work. Each piece helps to create a sonic universe in which noise, drone, and ambience grind in the background and bubble up to the surface. “Many of his tape releases had only one or two compositions, thus allowing him the time to develop a drone theme and hypnotically immerse the listener in what were vastly complex works of art,” wrote Joseph Nechvatal in his 2014 biography of Minóy. “His challenging, irritating at times, roaring-ambient recordings [created] deep and blurry ambiguous compositions full of feeling.”

Klingler learned all about that compostional process when collaborating with Minóy shortly after the two met, under the name Disco Splendor. “He had a fascinating way of working,” Klingler recalls. “For instance, he’d play two tapes of source material at the same time on his boomboxes in his bedroom, controlling the volume and EQ while dubbing onto a Sony Walkman Pro, adding live instruments or vocals or sounds of shortwave radio in real time. Then he would bounce these things back and forth multiple times to build up these complex compositions.”

This practice quickly became an obsession for Minóy, who often avoided sleep for days to make music. In 1986, his first year putting out tapes, he released 33; by 1991, that annual number had grown to 50. But the following year, his prolific output suddenly stopped. As he explained in a letter to another collaborator, Zan Hoffman, “Minóy Cassetteworks has been permanently terminated. My soul has dried up and blown away.”

“His manic episodes resulted in tremendous creative energy, but at the same time that energy could also feed negatively, causing him anxiety, or anger,” recalls Klingler. “This was the reason that we would only work together for a short time before burning out. I found out later that this happened rather frequently in Minóy’s life.​”

Such artistic turmoil was likely a product of Stanley Bowsza’s troubled upbringing. In his teen years, he came out as gay to his parents, who responded by putting him through electro-shock therapy in the hopes it might “cure” their son of his homosexuality. “This dreadful episode clearly had profound effects on his mind and body,” says Amber Sabri, who met Bowsza after encountering his visual art on Flickr in 2005, by which point he was confined to a wheelchair. “Pain, panic, paranoia, bipolar mania, schizophrenia… he lived it all,” Sabri wrote in Nechtaval’s book. “Massive amounts of medications had been prescribed for him for more than forty years in an effort to mitigate his neuropathic pain and psychic suffering.”

Though Minóy cut off contact after their collaboration ended, Klingler continued to reach out to him and never lost interest in his work. In 2012, he discovered by web searching that Minóy had died two years earlier. He then located Minóy’s longtime partner Stuart Hass, who had saved all of the artist’s master tapes. Despite suffering from Alzheimer’s, Hass “was cognizant enough to grasp the importance of saving Minóy’s work, and he trusted me with the archive,” Klingler recalls. “So eventually his boxes were shipped to me, and they turned out to contain over 300 master tapes.”

That trove included many unreleased works, some made after Minóy’s public retirement from music. “He abandoned the evolving soundscape approach of his earlier work,” explains Klingler. “The late compositions are just unrelenting and austere, heavy noise structures with little movement, sounding like a precursor to the Harsh Noise Wall movement today.​” It’s that kind of endless search for new sounds that makes Minóy so fascinating, and keeps Klingler excited about documenting his work.

“Even now when I am digitizing from his archive and listening to something for the first time, [I] can never know where it’s going from the start or how it’s going to turn out in the end,” says Klingler. “His work can be a labyrinthine experience in a way that really can’t be described… it’s like a gripping novel, or a film in audio. There was never anything quite like Minóy.”