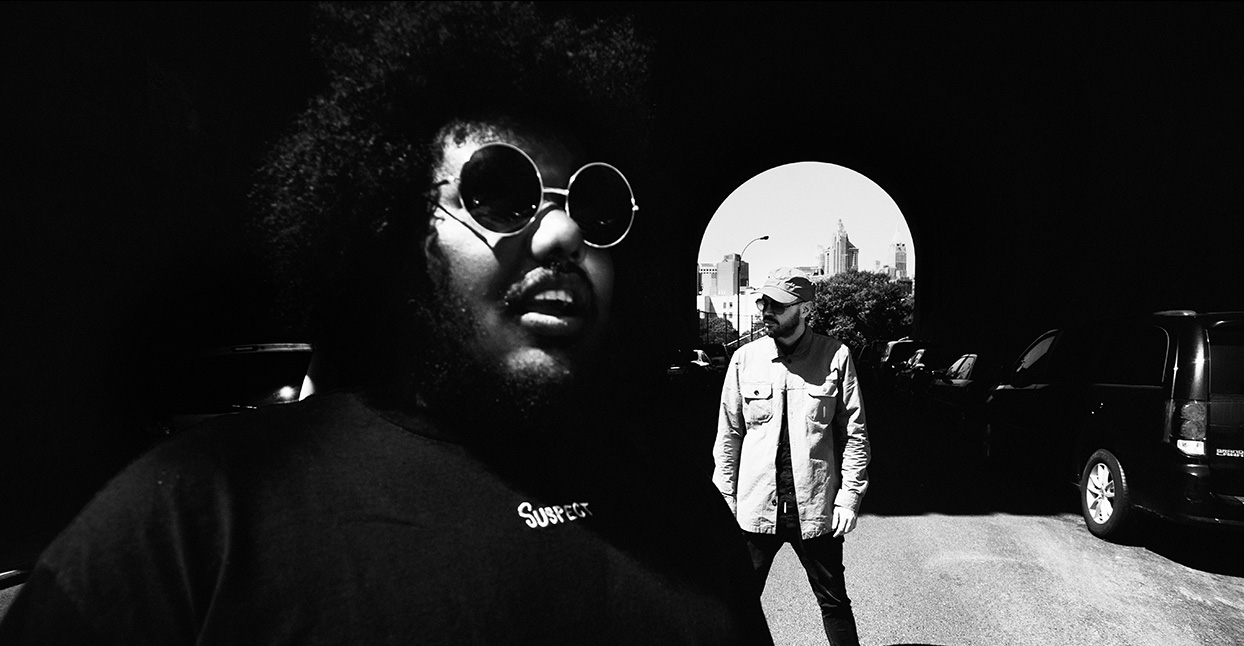 Boston rapper Michael Christmas didn’t know who Prefuse 73 was when his label, Lex Records, proposed a collaborative album between the two. To be fair, Christmas was only six years old in 2001 when Prefuse released his foundational debut, Vocal Studies + Uprock Narratives. At the time, the producer defied the ethos of his label—the electronic-minded Warp—by chopping up Erykah Badu and Ol’ Dirty Bastard vocals. Yet a single guest verse on Vocal Studies was enough to show Christmas why working with Prefuse could make sense. “I heard [MF] DOOM was one of those people, and I was like, ‘OK,’” Christmas recalls.

Yet he sounds at home. As a lyricist, Christmas disarms with both his childish insults (“I’m Spongebob with the accent / And you hate a lot like Squidward, n**gas”) and moody anthems for the slacker homebody who likes to stay indoors. But he also tests his own vocal capabilities, like when he croons in Auto-Tune about getting drunk on weekends.

We caught up with Christmas to talk about the realizations, misadventures, and sandwiches he had during the making of Lady Parts. Oh, and Uber drivers: Don’t talk to Christmas during the ride. He’s not up for random conversation.

Fucking hilarious. I didn’t know, for one, that he was Spanish. His name’s fucking Guillermo. He’s got these big fucking glasses. They’re not reading glasses, but they’re not all the way sunglasses, either. If you mention anything that he’s been through or seen a lot of, he’ll tell you a crazy story about it. He’s from Atlanta. He’s lived all over the damn world, so he has a whole bunch of shit to share.

The first day we kicked it and went to the studio; it was me, him, and [Cousin] Stizz. We didn’t have shit to do, so [Prefuse] was like, ‘Come to this bar with me.’ I wasn’t even 21 at the time, so we had to find a bar in New York that wasn’t carding. We did. We fucking got drunk in the middle of the day at this bar, talking shit. He was telling us mad stories. Me and Stizz was sitting there dying. When we left, me and Stizz, neither of us had Uber. Well, Stizz did have Uber but he didn’t have his phone. I didn’t have Uber on my phone yet—I don’t even think I had an iPhone yet.

Prefuse had to get us an Uber to where we were going. We get this Indian dude banging Bollywood hits in the car. Stizz is tearing the fuck up. But by the end of the Uber ride, we were both passed out like children in the backseat. We went upstairs and slept from probably 5 p.m. to 2 a.m.

Mind you, me and Stizz were supposed to go to a party. But we were so tired from drinking, this trip to New York, recording all day and hanging with this crazy dude, we deaded. Me and Stizz slept on a fucking sectional couch. At 2 a.m., we woke up and started watching Boy Meets World and ordered pizza.The next day, we go back to the studio, and we told Prefuse what happened. He was like ‘Wow.’ That was the day we met. That was the first day that we started working on this fucking project.

Does Boy Meets World hold up?

So, I catch the Pokemon references in your lyrics. But I think up until recently, those references were nostalgic—like, ‘remember this?’ But now there’s Pokemon Go.

I was playing it super heavy. But the game got boring to me. Then I realized people figured out ways to cheat. People were getting Pokemon without having to do anything. But the first week and a half that Pokemon Go was a thing, I was the most excited guy on Earth. I remember when my boy called me and he was like, ‘Pokemon Go is on the app store.’ I didn’t say anything. I hung up, downloaded it.

I’m sitting in my boy’s backyard, and we watch movies off his projector on his backyard. So we project the game onto his house. I downloaded the game and immediately started walking around this dangerous ass neighborhood looking for Pokemon. That’s the same night I took a picture with the Pokemon, and my boy took a picture with a Pokemon. I had like 16,000 retweets. That was when I was like ‘Wow, I’m the first person to go super viral off Pokemon Go.’ That made me dumb excited, to be a part of it. But then it got super weird.

The hype has died down.

Definitely. I don’t see as many people talking about it, which is why I’m not playing now. It was like when Frank Ocean[‘s Blonde] dropped. I don’t like listening to something when it first drops because of that, because people will hype it up and turn it into ‘This is the greatest album of all time.’ Then if I listen to it and I don’t like it, I feel like I’m doing something wrong.

Lady Parts has a song called, “Popstar Shit.” What type of famous do you want to be?

Why don’t you want to be “rap star famous”?

Was there anything you learned of yourself from Lady Parts?

Yeah. I learned that I love the bacon, egg and cheese sandwiches from New York. The greatest fucking sandwich in the whole world. I literally ate probably three bacon, egg, and cheeses a day while I was in New York working on this project. And I was drinking 40s like crazy.

A bacon, egg and cheese on what, though? A muffin, bagel?

That’s the thing in New York. It’s not on breakfast bread. It’s on a roll or a hero.

You talked about writing earlier. What is your process now?

One thing that’s different this year is that I’m better at writing in the studio than anywhere else. Before, I’d write songs in my damn bed and then take it to the studio. But I think my best songs have been from when I went to the studio and had a lot of time to just play beats until I figured out what I want to do.

Also, I’ve written whole songs in the Uber. My studio is across town. Some days I’ll go to the studio and I won’t have shit that I want to do. I’ll just sit in the Uber and go through beats and challenge myself to write the whole song before I get to the studio. “Who Cares” off of the Baggy Eyes EP—I wrote that whole song on the way to the studio. When I was writing Is This Art?, I wrote a lot of those songs on the bus to the studio. But that’s way more time. The studio from my house is three buses.

How long is the Uber ride?

It’s probably like 20 minutes [with] no traffic, 30 minutes with traffic.

Are these drivers cool with you playing beats?

I just play them in my headphones. I always feel super rude. I hate getting an Uber driver that wants to talk. I feel so bad, too, because I’m like, ‘Stop, I’m doing something.’ They’ll be like, ‘How’s your day going? You work over here?’ What are you, the feds n**ga? Leave me alone.