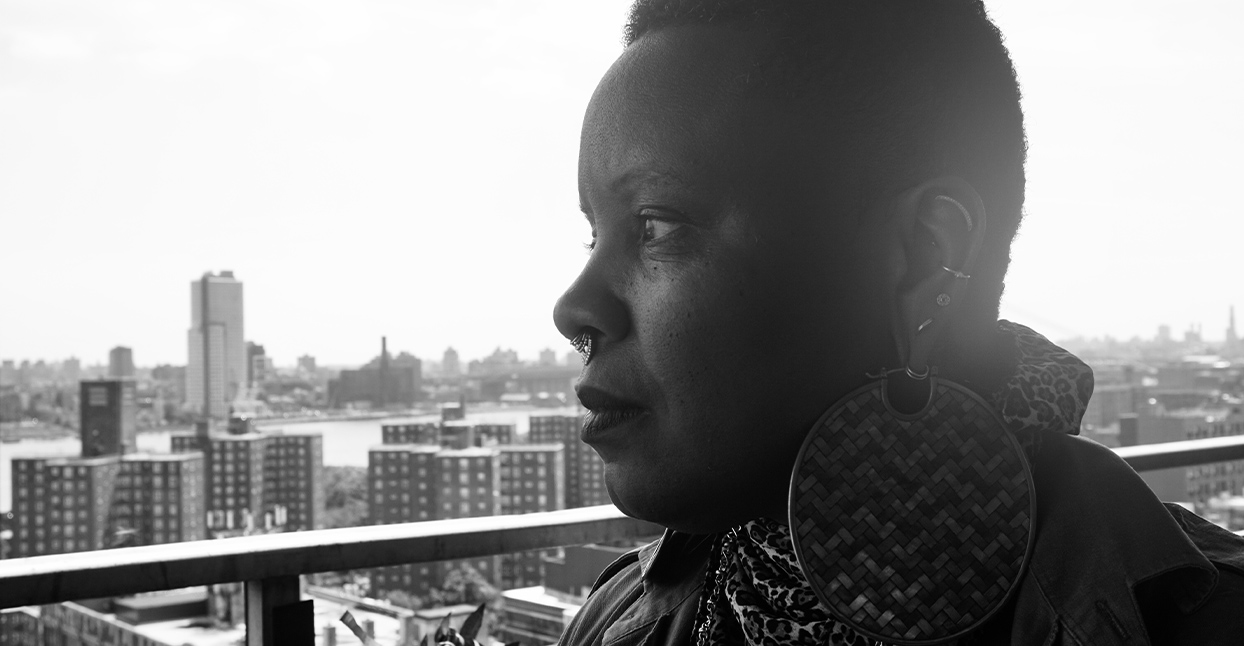 “I keep doing this thing where I let my curiosity lead me, and I end up in these different corners where I’m asked to do some really fascinating things,” says alto saxophonist, composer, and conceptualist Matana Roberts during a rare moment of down time while on tour in Paris. Indeed, the Chicago native is almost constantly traveling—whether she’s giving solo performances, collaborating with New York’s acclaimed International Contemporary Ensemble, or constructing sound installations in art galleries. All of her work reflects an artistic practice unencumbered by any specific discipline. It’s hard to keep track of her zigzagging trajectory, one in which she embraces the open prerogatives of improvisation to adapt her work to each new situation or climate. Yet over the last decade, one endeavor she has maintained and documented is her ambitious Coin Coin project—a projected 12-part epic of sonic ethnography blending her own genealogical research with history. The fourth installment, Memphis, will be released this week.

“Maybe because it’s so rooted in my bloodline [the series] feels like a beacon—some place I’m able to go back into and know that I’m home and I’m welcome there.” She says. “It’s my blanket and universe, and I feel some sense of love in that work that I don’t get from any of the other work that I make.”

The new album is the fullest reflection of Roberts’ work to date—an approach she calls “panoramic sound quilting”—blending art-rock, free jazz, old-time country, blues, and work songs. While her roots are in the open-ended jazz she played in the trio Sticks & Stones with bassist Joshua Abrams and drummer Chad Taylor, Roberts is an omnivore constantly absorbing new ideas. The project is titled for a borrowed nickname her maternal grandfather gave her as a kid. Coin Coin was also the nickname of Marie Therese Metoyer—an iconic freed slave and businesswomen who was central to the establishment of a Creole community in Louisiana around in the late 1700s—a key figure in the first installment of Roberts’ project, Gens de Couleur Libres, which was recorded in 2010 with members of Montreal’s experimental music scene and released a year later. Mississippi Moonchile, cut with a New York jazz quintet and featuring the operatic tenor Jeremiah Abiah, was released in 2013, while River Run Thee was a solo effort dense with overdubs and electronics, dropped in 2015. On all of the recordings Roberts sings and dynamically delivers spoken word drawn from her own narrative writing and interviews she’s conducted with relatives. “I want each chapter to have a different sound fabric,” says Roberts.

For the new chapter Roberts returned to Montreal to work with an agile quintet—as well as a number of guest musicians including trombonist Steve Swell and members of Godspeed You! Black Emperor—that includes drummer Ryan Sawyer, guitarist-violinist Hannah Marcus, bassist Nicolas Caloia, and guitarist-oudist Sam Shalabi (Land of Kush). The group interpreted one of the composer’s colorful mixed media scores, combining graphic and conventional notation—as well as conduction techniques she absorbed working with Lawrence “Butch” Morris years ago. Some pieces either interpolate or are based on traditional songs, like W.C. Handy’s “St. Louis Blues,” “Tennessee Waltz,” and the old sea shanty “Roll the Old Chariot,” which is voiced with stirring harmonies, like an old work song. The newst chapter focuses on Liddie, an unspecified relative of Roberts’s from the titular city, whose story she learned from her own maternal grandmother—a Memphis native pictured on the album cover. The musician adapted a first-person perspective of the subject’s brutal, racism-plagued childhood—including the murder of her father by members of the Ku Klux Klan. Roberts spent a month living in Memphis several years ago, conducting interviews and rifling through archives.

“This idea of a small child and having to witness—I’m actually not sure what she saw and didn’t—but I know how the story was told to me, so it’s my attempt to tell the story as her,” she explains. “I’ve taken a lot of liberties with that.” Considering the diverse musical legacy of Memphis, it’s fitting that the rock-edged attack of Roberts’s nimble band to toggles between styles. “The record is my attempt to say, ‘I don’t know Memphis, but I want to know Memphis because I know that Memphis represents something in me that’s still unknown to me.’” On a song like “Trail of the Smiling Sphinx,” Marcus unleashes dense southern fiddle lines alongside Roberts’ bleating alto excursions, with melodic fragments borrowed from old American folk songs.

Compared with the previous installments, Roberts’ vocal delivery sounds more assured, forceful, and dramatic—a shift she credits to private lessons she took with Mississippi Moonchile’s Abiah several years ago. “It really did amazing things for me.” The record is also the first installment in which the group painstakingly layered instrumental parts—due largely to budget constraints—resulting a thrillingly varied palette of sound. While the improvisation ethos of jazz presides over everything, Roberts has much broader interests, and she masterfully weaves them all together, in an ecstatic flow of emotion and sound given its spark by the human experience. “It’s just a cornerstone, a place for me to jump up where I feel comfortable,” she says. “[Coin Coin] often gets pushed into this thing where I’m talking about the African-American experience, and I get that, but considering the amount of travel I do these days, I’m really trying to talk about the American experience. There are so many hallmarks and that’s such a fraught term…a super fraught idea now more than ever, so I relish in trying to place it.”