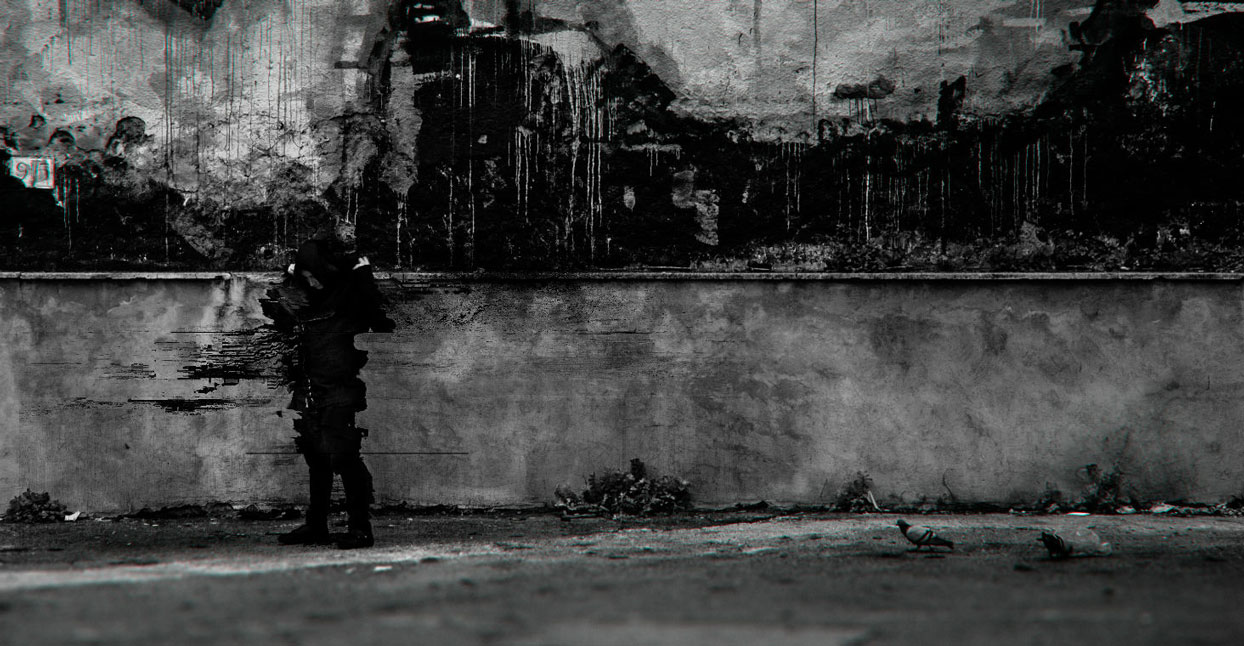 The only personal detail I know about the musician behind Master Boot Record, a project that fuses the lo-fi sounds of chiptune with the intensity and instrumentation of metal, is that he’s Italian. He may or may not have also been involved in the European Demoscene—an internet subculture priding itself on bringing art and creativity to cracked and pirated software—and he definitely knows his old-school video games. This mystery man’s output as Master Boot Record relies on more than a few conceptual gimmicks (songs have titles like “CONFIG.SYS” and “FILES=666”) and something mysterious called spellware, but the musicianship is real. MBR’s songs pummel and soar, taking sonic hints from industrial artists from the ’80s, contemporary black metal, and console gaming’s most intense boss battles. The new EP, C:\>COPY *.* A: /V, is pretty glorious—doubling down on spiraling synths and neoclassical song construction. The man behind MBR explained it to us using references to various internet subcultures and Norse mythology, which is all part of the fun of decoding and decrypting MBR.

You have thus far kept your anonymity online. Is that something you’re having fun with, or is it a vital part of your approach for this project? Can you explain?

That’s because MBR music is processed by a 486DX-33Mhz-64mb, hence any personal information is irrelevant. Only the music matters. I’m not hiding my identity, I’m just leaving it as a quest for those who are really interested to find out. I have many projects, and many people know who I am. Traces of my digital self have been scattered through the network since its very beginning, or even before, on Bulletin Board Systems.

May we ask your age and where you’re from?

There was a time I was young, loud and synthesized. Now I’m 100 percent synthesized and dehumanized. However my name is bV1VpWqXqmCMuxiTbTfmTA==, I’m Mew9H+QPg7DilhWcBOWoIA== years old, and I am v4fdGfa4G69m4kyBg4TFxQ==. All of this is very easy to decrypt.

Can you tell us a little about how you construct these songs? Your bio on Bandcamp is the specs of a processor, but can you talk about what program or programs you use to make this music?

I’m using Cubase 8, and everything is synthesized. I’m working with Massive to create the floppy disk drive guitar and bass synth, and all other sounds. The drums are programmed, too. I fine-tuned my “sound chip” between September first and 22nd, 2016, when I produced and released four albums on the fly. I always use the same set of sounds, which speeds up the mixing process and lets me focus on composition. It’s a bit like pixel art: low resolution; high imagination. Creation out of limitations. Expression in a minimal framework.

The songs on your full releases on Bandcamp are original songs, but you’ve also released a series of tracks from vintage PC and console games. Can you talk a little about the roots of your love for game music?

After releasing four albums in three weeks, I had the impression I was oversaturating people’s ears, but I felt the need to produce more music. I decided to switch to cover songs of my favorite games, releasing them weekly. My father had a computer store in the late ’80s, and I was dealing with every computer, console, videogame and piece of software in that golden era of informatics. My first computer was a Commodore 64. The chiptune and computer art of all these games, loaders and cracktros of The Scene influenced me in so many ways. Master Boot Record was born when I wrote the soundtrack for VirtuaVerse, a cyberpunk point-and-click adventure game I’m producing with my friends Elder0010 (coding) & Valenberg (art). Together we are Theta Division Games.

Your versions of those game songs are usually faster and more brutal than the originals. What do you think the metal treatment brings out in this music?

It’s really inspiring, because many of these chiptunes have a heavy metal soul. It’s trapped inside their limitations, in all the beauty of the old-school chips. Often the patterns are really heavy metal already, or even neoclassical. With most of my covers, I usually start out pretty straightforward, but then I take off, injecting my style into them while trying to stay coherent with the original theme. It’s really a great way to experiment and improve what I’m doing. I’m learning a lot from those chiptunes. I’m working with the Data Airlines label for a proper full release of those videogame cover songs.

Chiptune and heavy metal are forms of music that some people might hear as at odds with one another. It sounds like you think they share some common language.

So many people into chiptune are also into heavy metal and classical music. That’s because, as you said, they share a common language. It’s all hidden in the composition patterns. There are some chiptunes that are very close to classical music or heavy metal. The melodies, or even the riffs, are really similar: the only real difference is the soundchip. With MBR, I have essentially created a modern sound chip that is heavy metal at its very core.

I wonder if you’d talk a bit about your sound in general: What are some of your influences, and what is it about the combination of chiptune and metal that appeals to you?

My influences range from classical music to heavy metal, industrial, synth pop, techno and more. Being a kid in the ’80s and a teen in the ’90s, all the music of those eras deeply influenced me. I’ve been producing music for a long time, making different styles of music with several projects. I’m basically a singer, guitarist and sound engineer, even though I took piano lessons when I was a kid. Master Boot Record is just my most recent incarnation, and it’s probably the sum of all my past experiences. Anyway, it’s the very first time I’ve ever produced heavy metal or chiptune music, even though I’ve been listening to them for decades. That’s maybe also why I produced so many songs at the same time. Frank Herbert wrote in Dune that “Without change, something sleeps inside us, and seldom awakens. The sleeper must awaken.” Now I am awake.

You’ve had quite a bit of success. Was that something you expected?

Absolutely unexpected. I released all my albums only on Bandcamp. When I started, I just dropped few songs on the site to share with some friends. But then the word of mouth started to spread, and I was getting incredible feedback out of nowhere. I just kept riding the wave. There have been very few writers or media people talking about my music, so everything is happening thanks to the power of the network. I’m just producing more music. I was very disillusioned about success before this, but sometimes music alone has the power to break the wall of sponsored reality.

You said you’re joining up with the Data Airlines label. How did you connect with them, and what possibilities have opened up for you since you joined forces?

Data Airlines is an amazing team of pilots with roots in ’80s/’90s crack scene and Demoscene, such as legendary Warez group Razor 1911, with producers like Dubmood who are heroes in the chiptune scene. I sent them an email, which was suggested by a fan, and they immediately answered. For several reasons, connected to our past, our conversation ended up with a ‘welcome home.’ And that’s exactly how I felt. It’s like some epic force pushed me to cross paths with people who have been influencing my past and my music already in so many ways. It was magical. They released all of my albums on cassette, and put out a brilliant, floppy disc-shaped vinyl version of C:\>CHKDSK /F. They are also helping me with licensing and merch. They have a label account on Bandcamp, and have views radically different from all the labels I know, in a very positive way. In general, they are helping me to focus on my music and they take care of all those things I have no time for.

There’s a consistent visual aesthetic that’s accompanied all of your releases. Where did you get the visual inspiration for that from? Do you make the art yourself?

The aesthetic of the artwork I did is connected to the world of Technomancers that is behind my solo project & the videogame VirtuaVerse. MBR is spellware, to break the firewall of conformity cast through digital media. That’s the origin of my mix of DOS references and magical symbolism. I choose the [Icelandic] Vegvísir protection symbol as my logo for a specific reason: In the Huld manuscript, it’s written “If this sign is carried, one will never lose one’s way in storms or bad weather, even when the way is not known.” This really describes the situation I was in when I was about to release music with this project, and considering how things have evolved since then, it looks like the spellware worked.

The latest full-length, C:>CHKDSK /F, really feels like a coherent album, but obviously you’ve also released things in piecemeal form. How important is it to you to make great albums. Are you attached to that format?

Actually, all of my albums were written in the same three weeks, and I released them on the fly. I wrote C:>CHKDSK /F in the final eight days of that stretch. I was producing and releasing them at the rate of one/two songs everyday. In other cases, like for C:\>CHKDSK /F, I released like four songs daily, and then all of the other ones together. The songs are grouped like albums, but that’s because of the concept. The classic master boot record of the hard disk is made of seven entries. In my config.sys & autoexec.bat I included the necessary settings to make the OS work. While checking my disk instead, I was challenging myself. I guessed I’d recover at least ten files before writing the songs and then completed the process in eight days. The format, for me, is irrelevant. There’s not fixed rule. In fact, my next album is almost done, and I am just releasing it all together.

There’s something sinister in this music, and because you stand behind a robotic persona, we have to ask:  Are you a force for good or a force for evil?

My alignment is chaotic neutral, and my music is instrumental—hence it’s universal language. So it is neither good or evil. It’s speaking to your soul, but only you only know the answer. Only you know what force is gonna awaken. For is through our thought that we design our future.