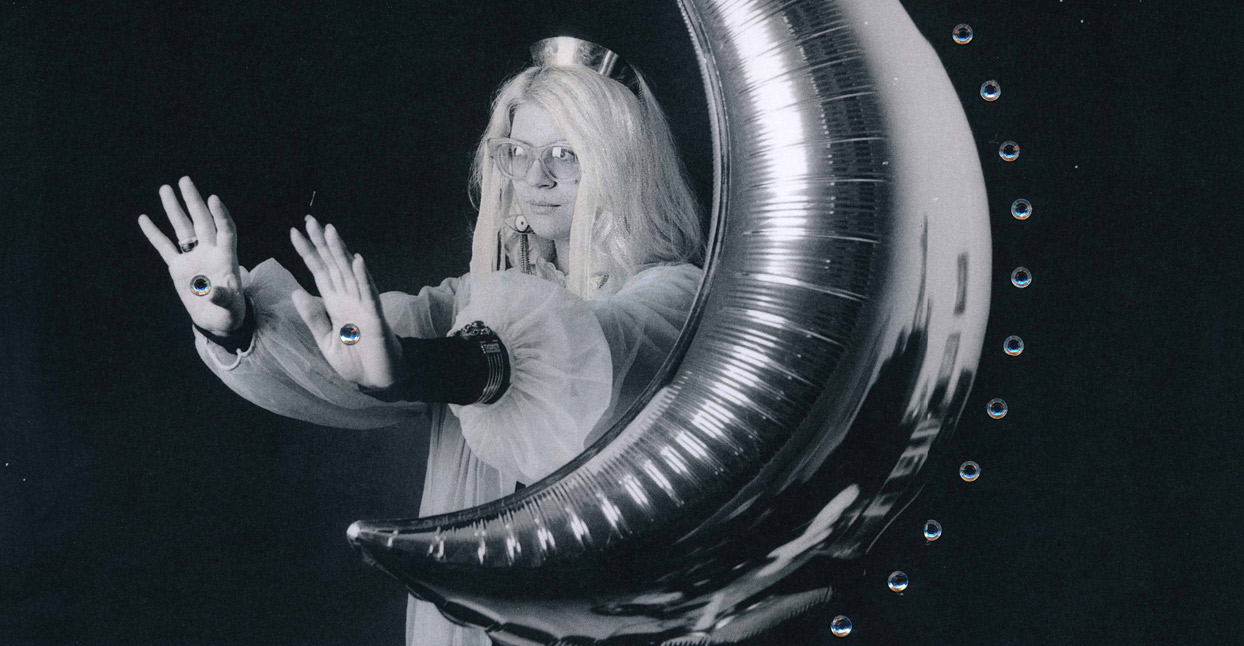 Mary Ocher has never been one to shy away from politics or personal slant. Born in Russia and raised in Israel, Ocher has consistently explored her heritage, life experiences and cultural observations in her music beginning with her 2008 album War Songs . Her latest, The West Against the People, is both a reflection on and dissection of the mammoth global superpower.

Musically, her outsider pop demonstrates an encyclopedic knowledge of genres and eras. She glides from defiant, punky new wave to prog-electro; she conjures ‘60s pop then howls over an unrelenting sitar; she raises her voice to a falsetto that recalls Kate Bush at her most eccentric, weaving in elements of classical music and opera before downshifting into psychedelia.

In advance of The West Against the People’s release, Ocher issued a compilation of remixes of her track “Arms” with proceeds going to benefit asylum seekers from war-torn countries. She’s also written a companion essay for the album that explores the its themes in a more overt, academic fashion.

We spoke to Ocher about “questioning everything,” the role of protest music, her habit of hopscotching across genres and the value in being an outsider.

I’d love to talk a bit about how the themes for this new record developed. Was it a deliberate desire to react to things you saw going on in the world? Or did the songs just come together naturally?

I mean, I write about social subjects a lot in general. My first album was called War Songs, and that was mostly about my experiences growing up in Israel, and with militarism, and all that. It’s just something that you deal with on a daily basis. It was very natural to dedicate the album to those topics. All of the songs on the new record deal with similar subjects, and yet I felt that they were not really able to express the details of particular elements I wanted to talk about. Therefore, the essay came about. I actually took a few weeks and showed it to a few people and tried to develop it to be able to properly handle some subjects that I felt the songs were too short to properly examine.

Gosh, I think it’s very interesting. There’s a part of me that is almost excited at the thought of a possible horrible disaster. Like, there is a part of me that just kind of wonders, ‘What will we have to deal with?’ Like, imagine that everything we are so comfortable with all of a sudden vanishes, and we’re left with—I don’t know! What are we left with? It’s terrifying, but at the same time it feels like maybe we do need to question everything. Of course, we don’t need to wait until there is a disaster, hopefully, but that seems more and more possible every day, and that’s terrifying.

You’ve explored politics in your music before. Is this something that’s always on your mind?

Well, I mean, I write. I like writing. I don’t know what else to write about. I mean, writing about personal issues is just not as exciting for me, I guess. It’s more mundane. I like to deal with topics that seem to be bigger than us.

What role do you think music plays in energizing communities?

I think it’s mostly just about communication, about finding a language to share experiences and ideas with other people.

In terms of the large umbrella of protest music, are there any artists or songs that really resonate with you?

Well, of course, there’s a lot of music from the ‘60s which I think is quite relevant. The stuff that Malvina Reynolds was writing—she was already very old when she was actually writing her work in the ‘60s. I also like the work of Buffy Sainte-Marie, and a lot of the stuff that Odetta did. Odetta actually did this Bob Dylan covers album which was great, it’s so much better than Dylan’s own recording.

Do you think that music with strong political content is a lot more underground than what it was in the ‘60s and ‘70s?.

The mainstream doesn’t really make any space for it. There is so much more awareness, people are trying to censor themselves, everybody’s afraid to hurt anyone’s feelings, and I think it’s damaging to the content of people’s work, really. The punk movement, for instance, was spectacular in the sense that people just said whatever the fuck they wanted. It was actually considered cool to just speak your mind.

Is there ever a moment where you’ve thought, ‘Oh, I shouldn’t say this right now’?

Well, I think I made all of the right moves in order to avoid being in the mainstream. I’m very comfortable with that, and I feel very much that I can do whatever the hell I want. And I appreciate this privilege so much, and the people who have sort of helped me to be free, to be able to do this.

Your music has incorporated a wide range of musical styles over the years and throughout various releases. Is that just a case of, ‘I want to try this now?’

Well, I get bored very easily, and I don’t want to get too comfortable. One thing that I try to do is, every now and then, change the instruments, and change the way the song is being written—start from something different. And, also, when you collaborate with other people, that always forces you to try something that you would’ve never tried. It’s mostly just about trying to figure out a way to do things differently so it’s not always exactly the same process.

Well, it was fascinating to have a deadline—to know that we had about four months to write and record. Usually, you would just make an album and then try to shop it around to find a label, and it would take another year, year and a half, or maybe two years until the album is actually released. In the case of this album, we knew that the entire thing had to be completed before the end of the year and released around March, and it was really exciting. It was also terrifying—kind of a race against time. Overall it think it was a positive experience.

It’s interesting to hear you talk about the benefits of a tight structure, since it seems like your whole approach to your career has been deliberately unstructured. Was that your desire from the very beginning?

I think that when I was just starting out, I still didn’t really understand who my audience was . I was curious to see what sort of people would find what I do interesting. Over the next few years, I could kind of understand a little bit better, and I learned that people who liked my music were generally people that I could be friends with, people with whom I have a lot in common. And it’s very comforting to know that you’re not alone, that there’s all these people who are interested in the same things or relating to those things [you’re singing about]. And it’s interesting how your ideas can turn into something entirely different when somebody with a very different background discovers it—and it could be something positive, and it could also be something very unfortunate.

Do you have a particular example you’re thinking right now?

Oh gosh, there was a journalist from a right-wing newspaper who came to one of my shows in Berlin. He introduced himself after the show and I was a little bit, I was actually pretty shocked, to be honest. And I was sure he was gonna slaughter my work, or that he was gonna write something really nasty. But he actually wrote something positive, where he basically recommended people to come to the release show, and I really didn’t expect that. In some ways, it almost neutralizes the work and makes you think that, if your work appeals to people that you suspect are right-wingers, maybe your work is not being explicit enough in explaining itself! I don’t know. It was great that he liked it, but it was just very… I just wonder what sort of strings might be attached to it.

You’re currently based in Berlin. How does that affect you as an artist?

It was a very different city when I moved here.

When did you move there?

The end of 2007. And there was a lot more empty space, a lot less people, things were a lot more affordable, which meant that people had much more time. Also everybody [that I know] is in their 30s now. In our early 20s, everybody was equal, because we all had nothing, and we all got by with very very little. But I’m realizing that that was also an illusion; people who grew up with a little bit more comfort, now that they are in their 30s they’re trying to get back to that comfort. That shatters the illusion for me, because I did want to believe that we all were idealistic, and we all wanted to follow our ambitions and not give up so easily to hold on to a paycheck. Because for me, that’s the absolute nightmare. But I think that Berlin is turning into a city that is much more similar to a lot of other cities.

I mean, I know people who are in their 20s who still think that Berlin is this giant ‘la-la land.’ And in some ways, it is. But there’s no more abandoned, empty spaces in the city center. You can find them, but it’s far far away. There’s all these IT companies and start-ups, and corporations that are moving into the city because real estate is so affordable for them. That’s just what happens.

One last thing that I wanted to talk about was that remix EP. Could you explain it to me and how that all came about?

Well, there was the song “Arms” that I thought was pretty strong, and the version that I made for the album is very very minimal, so I thought this would be a good opportunity to make different types of collaborations. I suggested to a few people that they make remixes of that song, and a lot of people responded. And I was really excited, because the remixes were very diverse. There were so many different directions, and some of the songs sounded nothing like the original. Originally, it was supposed to be an EP but it turned into something perhaps a little too long to be an EP. And I thought, ‘This would be a very good opportunity to use this to donate whatever we make to war asylum seekers.’ I’d been also researching some organizations in Berlin. It’s quite difficult to find just the right one, so I’m quite happy with the ones I’ve selected for now.

Where do you see yourself a year from now?

I honestly don’t think about this. I want to be able to survive, and I wish us all the same, and that things are not going to get worse than they already are. I fear that they will. It feels like a really terrifying uncertain, maybe exciting time to be alive. But mostly, pretty scary.