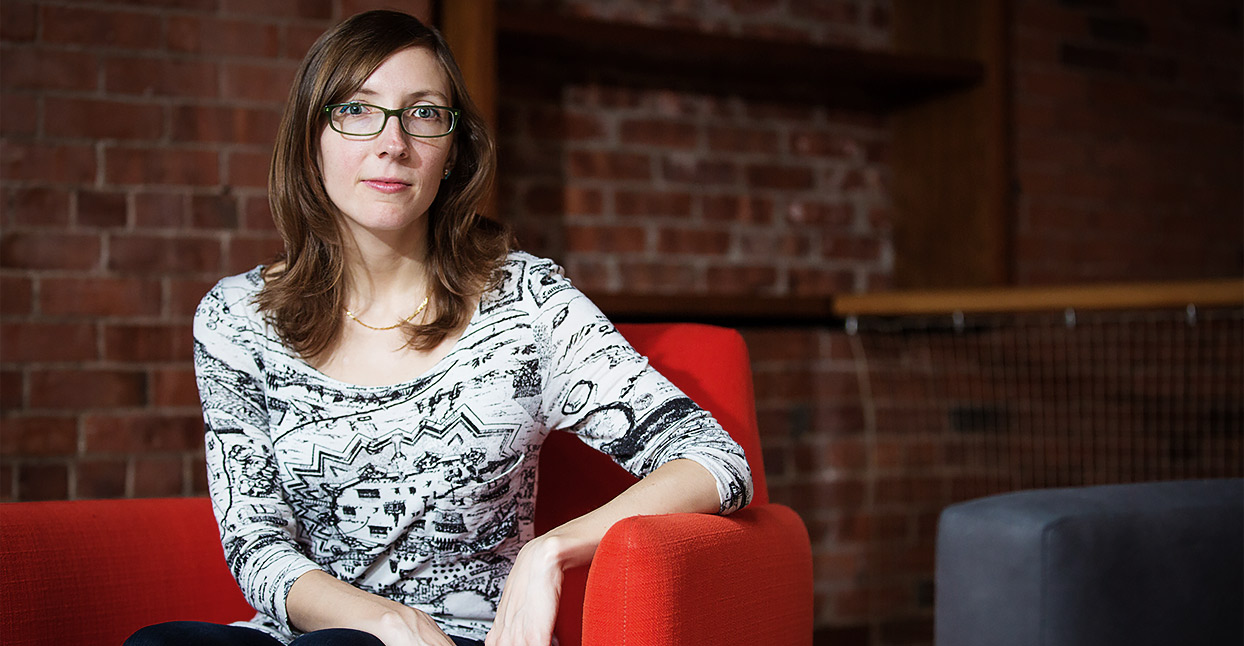 The music of jazz guitarist Mary Halvorson has become a fixture on many year-end lists, mostly because of her unique sound, which blends noise-rock and pedal-assisted pitch bends. She’s also a complex songwriter who, over the course of eight years, has broadened her sound through a number of different ensembles, beginning with the Mary Halvorson Trio in 2008. Halvorson expanded her lineup to a quintet for follow-up albums in 2010 and 2012, adding alto-saxophone and trumpet to the mix. Then she enlarged that group to a septet—incorporating tenor sax and trombone for 2013’s Illusionary Sea.

Away With You is the debut of the Mary Halvorson Octet. This time around, the rookie member is pedal steel guitarist Susan Alcorn. The addition of this particular kind of six-string player gives a new warmth to Halvorson’s sound. We met Halvorson on a Brooklyn rooftop to discuss what happens when she brings another guitarist into her band, and how her approach to writing changes with each new project.

How did you become familiar with Susan Alcorn’s pedal steel playing?

I heard her play live a few times in all these different contexts. There were a couple of improvised things, and then I heard her playing this Country-Western style stuff with a singer-songwriter. I remember each time thinking, ‘She’s incredible.’ Just the range of what she does, the sonic stuff she can do with the slide and all the pedals, as well as the instrument itself. Hearing her made me more aware of the instrument, which I don’t usually think of, because not that many people play it. The range of the instrument is insane. It goes lower than an upright bass and higher than the highest note on the guitar. I just thought it had a really unique sound. And hearing her rip the instrument apart and do all these crazy things with it, I just really wanted to find a way to do something with her.

Are you always trying to expand your group?

After I did the Septet [record], I thought, ‘I’m not gonna add anybody.’ It’s enough to deal with, logistically and financially. Also, just for me, I felt like it was already a pretty big palette to work with. I just didn’t have the desire to add more people. It also could have been I hadn’t thought of the right person. Then, when I heard Susan, I thought that adding her to that group would be amazing. Once I got that idea in my head, I was like, ‘I have to do that.’

Is it fair to say that, as your ensembles have expanded, there’s been a greater focus on lyricism in your writing, as well?

I think so. That’s always something that’s been important to me—even in weirder music or improvised music—having a really strong sense of melody and harmony. And I think it’s true that when I’m looking for musicians for those larger groups, especially for the septet and octet, I definitely want people who can do both. I want people who can be super melodic, but also play some crazy stuff, because I like being able to go in and out of those worlds.

In terms of composition, what drove you while making this record?

It was largely focused on the pedal steel for me, because that was the new element. I felt more comfortable writing for the other instruments. It was easy to write something and sort of visualize what it would sound like. But with the pedal steel, there were a lot more unknowns. So when I was writing, I was corresponding a lot with Susan—because I didn’t understand how to write for the instrument!

Were there challenges in terms of notating your ideas for it, or…

Oh, lots! I mean, I would have to study the instrument, I think for years, to really understand how to write for it correctly. It was a trial-and-error process. I went down to Baltimore, where she lives, and she kinda showed me the instrument, and we listened to a bunch of stuff. I had written a couple of things, and she showed me how she could play it. Or how maybe a different octave was better and here’s why. We had this exchange, back and forth. So all year as I wrote stuff, I would send it to her. There are some moments that really feature her as an improviser, and there are moments where she has a melody line that really cuts through—and other people are doing harmony lines. Or where she and I have some really nice counterpoint. There are definitely parts that were probably less intuitive for her to play on her instrument—but I like that!

How does adding another guitarist to your band change your own approach?

First of all, I love playing with other guitar players, and I don’t get to do it enough. [I play with] Brandon Seabrook, and in [Marc] Ribot’s band, and it’s always amazing, especially if it’s someone who plays very different from me. With Susan, it’s so different with the pedal steel. It feels like a different instrument, but then there are these moments when we can get a blend.

Sometimes, it sounds like there’s an intentional ambiguity about which one of you is playing.

There actually were moments where I would try to blend with her on purpose. We had a moment where we were both playing slide. There were nice things like that where I would almost try to imitate a pedal steel. But I think if it changed my playing at all, it made me play less. Because I feel like there’s so much happening—and a lot of times, I wanna sit back and let stuff happen. I guess maybe that’s natural as the group gets bigger; you don’t want everybody just constantly playing all the time. So I probably play a little less, or have a lot more moments where I’m leaving space. And then there are moments of total cacophony.

As the group gets bigger, I’ve been thinking about space more—how to leave space or how to make different orchestrational decisions. Because the music is so dense, the way I write is so dense, I have to try to find ways to counteract that.

Is there a song on the record that’s satisfying to you, on that particular level?

With the octet music in general, I was trying to find a balance between individual, form-based solos and more open, collective improvisations. Both of those elements are present on “Spirit Splitter.” I started composing that piece on an airplane on the way home from a long and crazy tour. Not an ideal environment for writing music—and I don’t normally compose on planes. However, I had an initial idea for Ingrid [Laubrock]’s tenor line, and the piece poured out pretty quickly from there. I was able to adequately express a certain kind of intensity of energy I was feeling at the time.