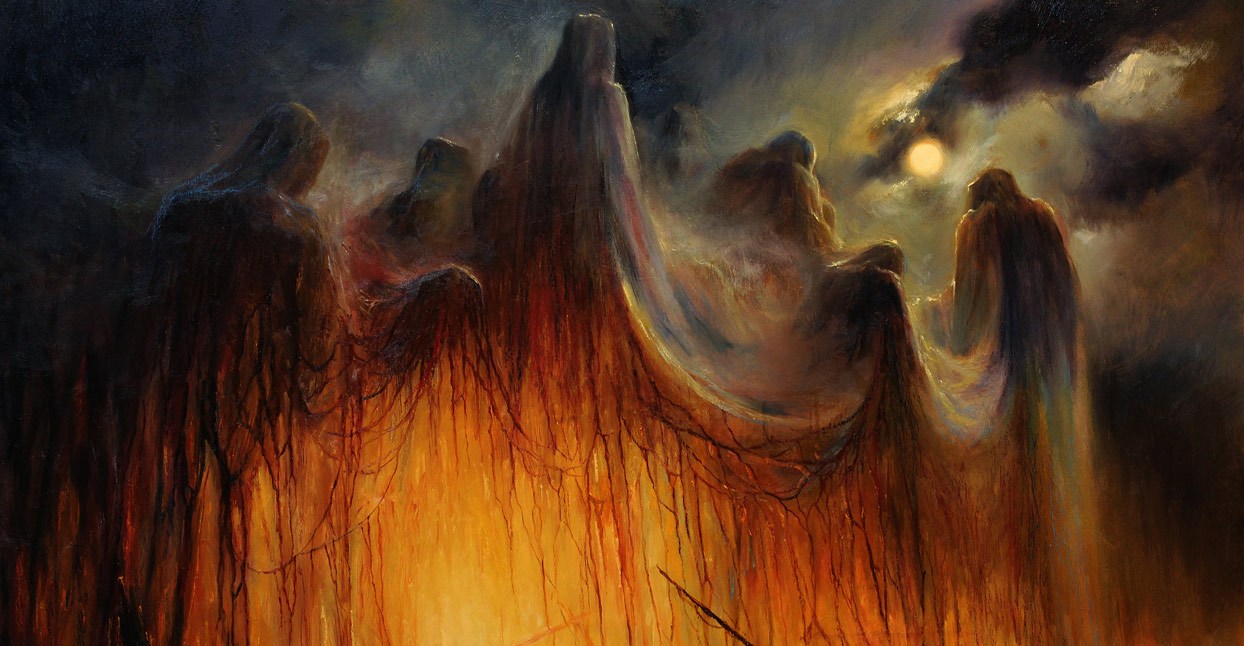 “Capturing emotions in a painting is similar to showing depth and light. If it is not there, if it is missing, the art is simply flat and it does not look good,” explains Mariusz Lewandowski, a Polish painter whose artwork, by the venerable Encyclopaedia Metallum’s count, has emblazoned the covers of 10 metal albums since 2017. Emotion is as integral to his work as his depictions of skulls, scythes, and other standard metal imagery—if not more so.

Lewandowski’s latest cover art is for Mizmor’s new, blackened-doom epic, Cairn, and it depicts a small figure on the edge of a chasm, staring across at a towering hooded figure, who holds a pyramid crackling with electricity. You don’t need to know that Cairn grapples with mortality, or that Lewandowski’s original title for the painting is “Immemortal Question,” to grasp the arduous quest for meaning that the painting evokes.

“There is no surprise or mystery as to why we were drawn to [Lewandowski’s] work,” writes Dylan Desmond, of funeral doom greats Bell Witch, over email. “It’s dark, beautiful, and invokes uneasy questions in the mind.” Bell Witch’s Mirror Reaper, released in 2017, was the first album cover credited to Lewandowski, who refers to it as his “debut”; the art bears the specter of founding member Adrian Guerra, who died suddenly at 36 a little over a year prior. The album is as crushingly heavy in theme as it is in sound, which wasn’t lost on Lewandowski. “When I learned about Adrian’s departure and turned on their music, tears came to my eyes,” he writes. “[Bell Witch’s] music made an amazing impression on me. I’ve never heard such metal before. And when they offered me to paint a painting for their next album, I couldn’t refuse.”

To say that Lewandowski rose to the occasion would be an understatement. The painting he submitted to the band, titled “Essence of Freedom,” is a stunning landscape that blew Desmond away. “My jaw dropped when I opened that file attachment,” he writes, “[Lewandowski] created another world with an entire history and reality of its own.”

“Essence of Freedom” clearly made an impression on others too, especially other metal artists. “When the album premiered and went on sale, an avalanche started—really, I got dozens of emails a day, dozens of messages on Facebook with a request to paint art, with a request for a quote,” writes Lewandowski. “It was a nice feeling but the pace frightened me.”

2019 has, to date, yielded six more albums with Lewandowski covers, two of which—Cairn and False’s Portent—arrived via the same label, Gilead Media. Label head Adam Bartlett observes via email that “each of those bands generally leans towards expansive composition [and] songwriting with an ‘epic’ feel to it,” which makes Lewandowski’s art “a great fit for both.” He compares the painter’s “somewhat abstract, mystical, dark, and horror-themed” work to that of the late Zdzisław Beksiński, another Pole with a sizeable Metallum page of his own. “I think it’s obvious that there is something about that iconic, emotive imagery with an overwhelmingly massive feeling in which both these artists specialize that speaks to metal bands,” he concludes.

Regarding his personal tastes, the 59-year-old Lewandowski says that his “soul goes more towards rock than metal,” but adds that this “does not mean that I am at odds with metal. As you can see from several covers that I delivered to this industry, we get along quite well.” Genre is besides the point for him; rather, it’s about carrying a message, and his main focus when working with bands is ensuring that his work “correlates with music.”

As for his non-musical inspirations? “In short, all of humanity’s activity, both positive and destructive. Philosophy, myths, and religion, which over time also turns out to be a myth—all this can be an inexhaustible source of inspiration for any artist.”

That scope may seem grandiose—but then again, so is Lewandowski’s art. In nearly all of his paintings that have been either commissioned or chosen for usage on metal albums, humans appear as miniscule specks dwarfed by more vividly sinister or mournful humanoid forms on the horizon. Are they lurid manifestations of the thoughts and actions of those milling about on the ground below? Are they gods? Demons? Lewandowski may deem such questions unanswerable, but that inherently mystifying quality of his work might be its greatest strength.