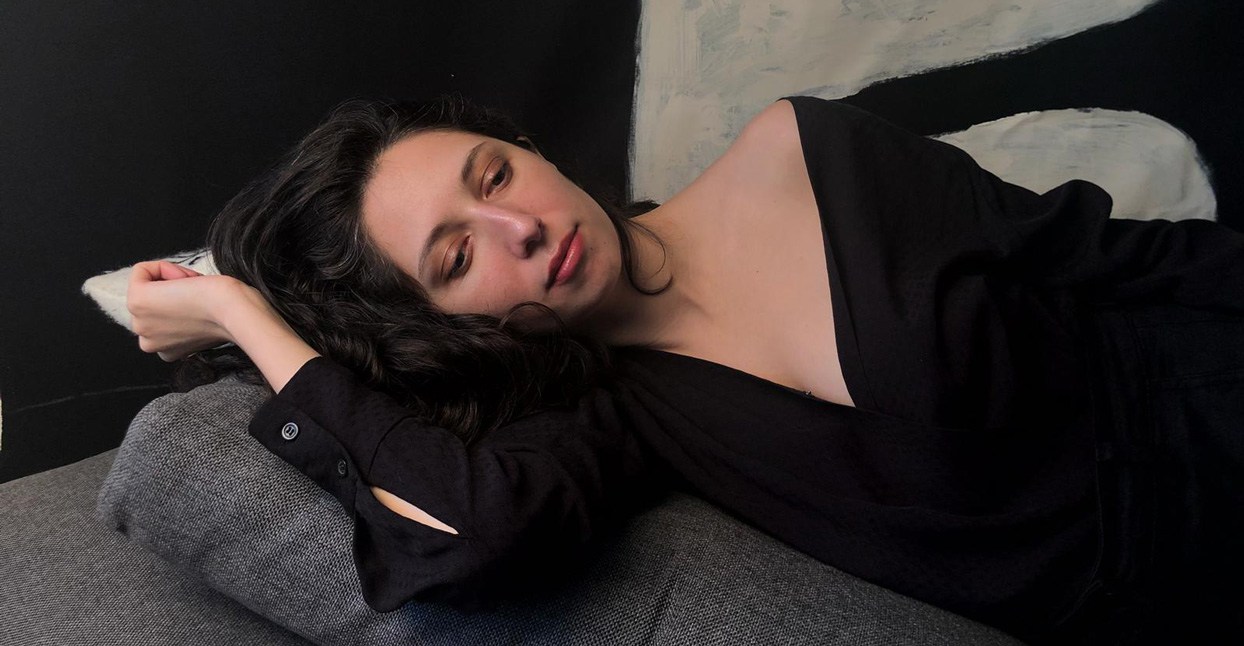 Maria Usbeck’s sophomore album, Envejeciendo, is a concept album about growing older (the Spanish verb “envejecer” means to grow old), and the Ecuadorian musician approached its creation like a scientist conducting an experiment. Before she started writing, Usbeck gathered evidence, speaking to people in her own life about their experiences with aging. “I had to,” she explains, over cocktails at a bar in Brooklyn. “It helped me trim down what I wanted to talk about, because it’s such a broad subject.” Usbeck stumbled on the topic somewhat accidentally, after finding her first grey hair and entering what she describes as an “aging-induced slump.”

“I went through a couple of major changes in my late 20s, early 30s—physically and emotionally—and I became obsessed,” she says. She started reading about advances in technology, the ways they negatively impact the elderly and are reshaping the way the human brain functions. Usbeck then began having those conversations—talking to her parents, her grandparents, and even strangers she’d meet on her travels. Eventually, she drew a line back to herself.

“You know that moment when you realize, ‘I’m like my parents?’ You think that moment is never going to come along, but it totally does,” she says.

And while the sound of Envejeciendo is nostalgic—’80s dance music and ’90s techno beats are the dominant modes—despite the record’s themes, Usbeck isn’t sure that was intentional. “We’re ’80s babies,” she says, referring to both of us, and discussing the layer of synths that saturate the album. “It’s subconsciously in there, whether we’re aware of it or not.”

There are other nods to the past throughout the record: Opener “Adios A Mi Memoria” (“Goodbye to my Memory”) begins with what sounds like a distorted dial-up connection, then shifts into a lithe, almost future-funk riff. “Every day is a new day, I can remember what I did yesterday,” Usbeck intones, giving the words the solemnity of a New Age chant. “Un Cabello Gris” is about finding that first grey hair, and is the closest Usbeck comes to addressing her anxiety.

Her grandparents also appear on the record. On “Amor Anciano,” Usbeck includes a recording of her grandmother discussing what her life might have been like if she’d married a different man. “The Machine” is named after her 90-year-old grandfather’s insistence on referring to all modern technology as a machine. “He worked in telecommunications, setting up antennas. Very early forms of technology,” Usbeck says.

“[Growing older] is a challenge,” she says. “And it’s a challenge predominantly for the elderly. The older generations can’t keep up. Is that going to be us? Are our brains going to shut down at a certain point and be like, ‘I can’t understand this anymore?’”

Usbeck says her friends are worried that she’s too obsessed with the subject, but they may be failing to see Envejeciendo’s lighter side. “Secret In Japan” is a humorous poke at Eastern philosophy, with Usbeck listing things considered “secrets to our longevity”—“good air,” “good food”—before concluding, “I think the secret to our longevity is…actually, I don’t know.” The backbone of the song is a synthesized harp sound and a recording of people talking, which Usbeck distorted. It sounds like a mash-up of 2814, Alice Coltrane, and Terry Riley. Vaporwave on life support.

Ultimately though, Envejeciendo is about Usbeck embracing change. “Why don’t adults like what we like?” she asks. “It took me a while to understand, basically until I became a full adult, that nostalgia is such a powerful feeling. I think it’s a connection to a certain time; to a certain feeling. We’re way more open as people when we’re younger. As you age, you start to focus more on what you really like.”