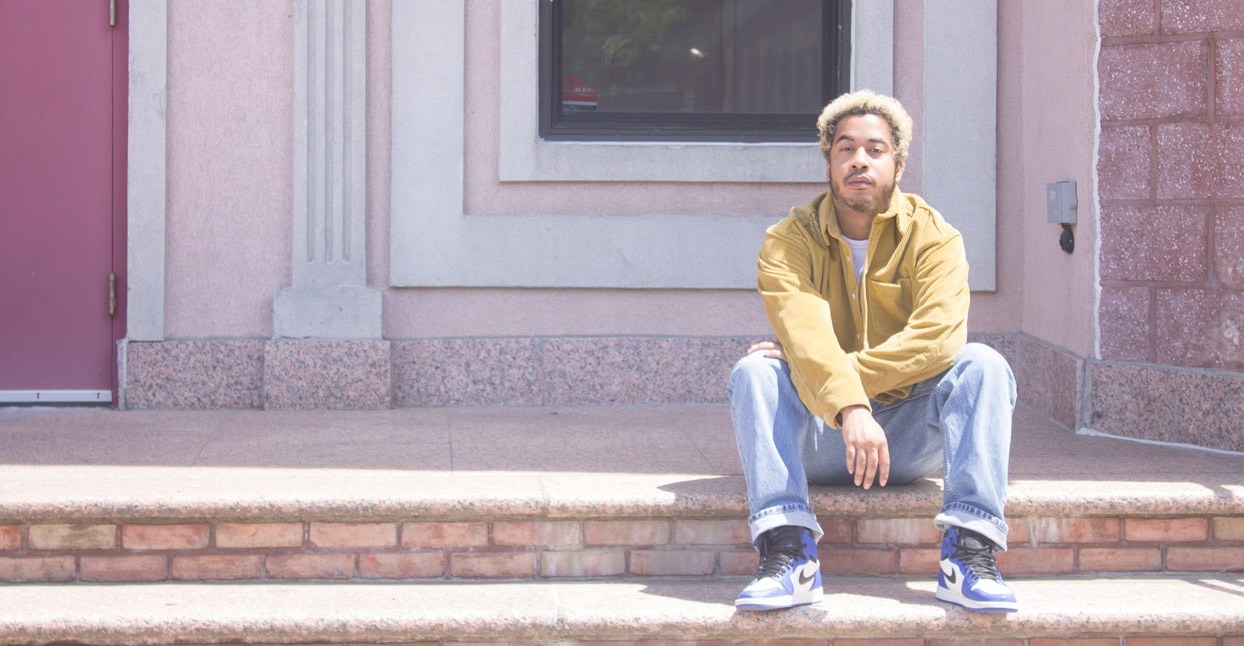 “An ever-growing god complex is brewing in me, now that I have control over everything,” Devin McKnight says jokingly. Previously, as part of Speedy Ortiz, Grass is Green, and Philadelphia Collins, he was only responsible for his own guitar parts; now working solo as Maneka, he’s the one calling the shots. The adjustment is a welcome one—having the space to explore is precisely what drew him to recording alone in the first place. McKnight’s excitement about this new freedom to experiment comes across throughout Devin, Maneka’s debut LP. The album’s opener, “Oopdie Oop,” is 26 seconds of pure noise, daring listeners to make assumptions about the way the rest of the record is going to sound. It’s also something of a statement of purpose: At this point in his career, what McKnight is most interested in is pushing himself musically.

“In bands past, we were always a group of three to four people that got along really well, shared a lot of interests, so it was like having a good conversation,” he says. “I guess I didn’t know that I could do all of the stuff. It speaks to their prowess as musicians, because I felt like I didn’t need to know—I had these cool people to play with. I think of [Maneka] as a personal exercise—as a musician trying to continue to grow.”

While the desire to conquer new instruments, sounds, and musical experiences could be read as some kind of internal competition with himself, or the desire to capture his audience’s attention with something new and bold and different, after talking with him for a few minutes, it becomes clear that it’s the act of playing in and of itself that drives him. “Just playing music for music’s sake is awesome,” he says. “It’s like playing a good video game or something,” he says. Devin finds humor in what McKnight calls “genre trolling,” exploring as many corners of sound as possible, and watching as people try to encapsulate it.

The stage provides another opportunity for McKnight to try new things. Playing shows galvanizes him, giving him his own time and space and making even the worst days worthwhile. But he’s still adjusting to being the center of attention. In person, McKnight is soft-spoken; he resists self-mythologizing and demurs when asked questions that seem to overly intellectualize his process. Whatever nervousness or hesitance he has about being in the limelight, he combats it by focusing on the music, and working on specific elements of his live show. On stage, he revels in playing “Molly,” a somewhat improvisational live piece that appears as an interlude on Devin.

As a guitarist of color, McKnight has long been contending with how white the indie rock scene is. When he first began playing shows over a decade ago, he didn’t even think about the people who were watching him; but it soon became clear how meaningful his presence on-stage was for the audience. “People come up to me and tell me it means a lot to them to see me up there,” he says. This has given him the confidence to be more direct about his experience as a black man in the indie scene. “The more you start saying it out loud, ‘I’m not like that so it’s going to be a little different for me,’ you can draw some confidence from that,” he says. “It’s an empowering thing that you’re not like everybody else. But that’s a long road of conversations with myself and running into disappointments.”

“Style,” the album’s closer, is a musical manifestation of this epiphany. It’s a recording of a conversation between McKnight and his mother, layered over the instruments he’s most familiar with, the guitar, and the drum machine. Though its construction is simple, it offers a weighty summation of what the album accomplishes, touching on the various music styles that McKnight’s parents exposed him to—Kansas City Jazz, The In Crowd, and the classics—and how he seeks to unite all of these in his own music. The album is a testament to the importance of being true to oneself— and a document of the high and lows of attempting to do just that.