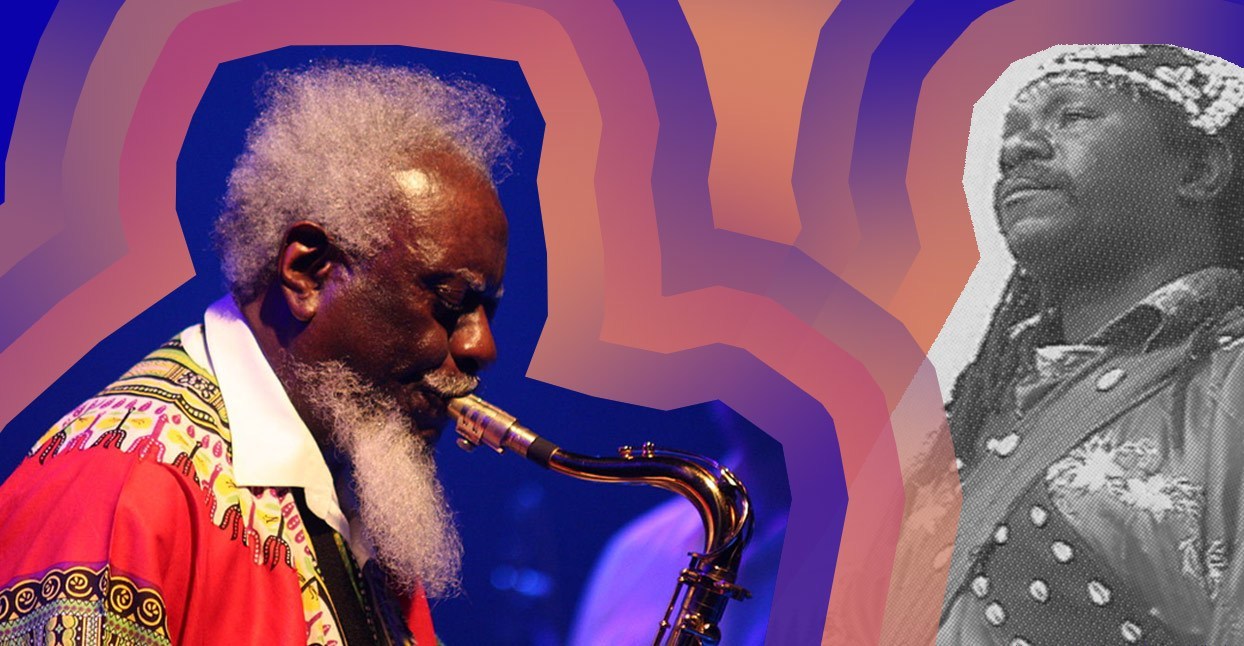 Bassist, record producer, and “collision music” auteur Bill Laswell had been fascinated for years with the music of Morocco’s Gnawa people when he brought a jazz saxophone legend to play with them in 1994. “I thought to myself, ‘Maybe it’s a good idea to take Pharoah Sanders,’” Laswell recalls. “Just to do something different.”

The gambit paid off. With nothing more than some mobile recording equipment, Laswell recorded Sanders in Essaouira, a western city at the foot of the Atlas Mountains, with Maleem Mahmoud Ghania—a singer and guembri player who was regarded as “the King” of Gnawa musicians before his death in 2015—and his family. The resulting album, The Trance of Seven Colors, was released on CD to worldwide acclaim, with one critic calling it “one of the most important albums of Gnawa trance music released in the ‘90s.” Its status in the annals of world music is such that Germany’s Zehra Records is now releasing it in a 25th anniversary edition that features the album’s first vinyl release. “I’m so thankful that these guys are releasing this kind of music,” Laswell says. “No one else is and it’s very positive.”

Morocco’s ritual trance music has long been an influence for Western musicians. Latin rocker Carlos Santana also played with the Gnawa, while Rolling Stones founder Brian Jones and free jazz pioneer Ornette Coleman had encounters with the Master Musicians of Jajouka (in Morocco’s northern Rif region). That it should attract Laswell, whose “collision music” involves bringing together two disparate styles of music and seeing what happens, was inevitable. “Gnawa was a point of interest because of the repetition of the low end,” he says. “They call it many things, but it’s always had this dubby kind of effect: just repetitive bass lines that they play for hours.”

The Gnawa are Sufis, the mystical sect of Islam. Their music is for spiritual purposes, used in rituals that allow them to call forth ancestral spirits, giving the music—intensely rhythmic—a hypnotic, incantatory quality (hence “trance music”). Yet it has never been regarded as music  that should be kept safe from outside influence; that was never likely to happen in Morocco, whose northernmost point is just nine miles from Spain (and thus Western Europe). “It’s all hybrid connections,” Laswell explains. “If someone passes through those mountains from Spain, or Italy, or wherever, it’s all absorbed and adapted and put into their sound.”

Ghania, in fact, embodies that openness. His family came to Morocco from the West African country of Mali, and his addition of that musical heritage to the Gnawa tradition resulted in a dark quality in his music that even some Gnawa found disturbing. When Laswell first sought him out, “All the people would say ‘No, you don’t want to mess with that. It’s very dark, it’s devil business.’ I got that a lot.”

Undeterred, Laswell made the connection and arranged to document him. His choice of Sanders to join them was a natural one. “I never really saw him as a jazz musician,” he says. “Pharoah is more like this world music figure, and I thought his sound and the way he approaches things would fit really well with the Gnawa and it would give it another dimension.”

It did. Sanders brought with him some music that he had learned from the Seminole tribe in Arkansas, where he grew up. It turned out to have analogues within the Gnawa music, which is a set repertoire of figured bass and songs. The jazz titan fit right in: Sanders, Ghania, and the other musicians sound as though they’ve been playing in the same tradition together for their whole lives. “Pharoah was just being Pharoah, just doing improv in that,” says Laswell. “There’s a lot of magic there—things that you can’t really decipher, you just have to go with it.”

The Trance of Seven Colors made a lasting impression on the world music scene, as evidenced by its anniversary release. It also made a lasting impression on Laswell. He recorded Ghania again in 2014 for a (still unreleased) film by Jay Bulger. He also recently made a record with Ghania’s younger brother, Mokhtar. “That music is disappearing,” Laswell says. “It’s being erased. The fact that [Zehra] is making vinyl of this kind of music is very encouraging. It’s ancient music, but there’s a way to put it into perspective for future music as well.”