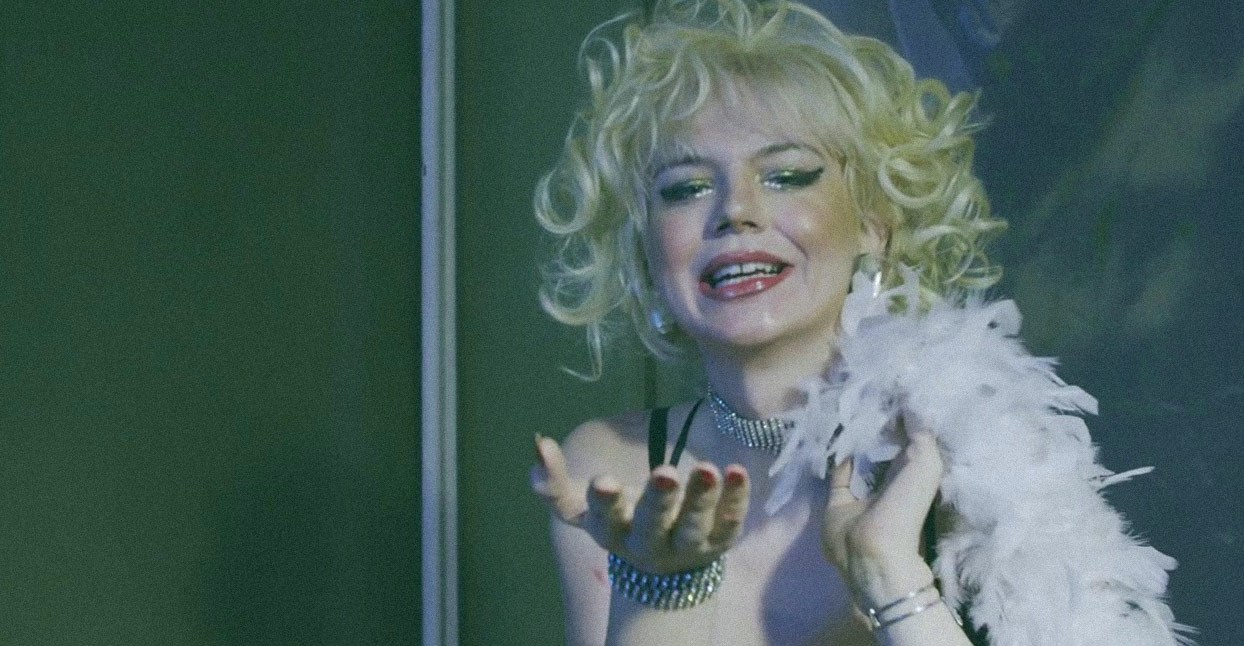 Plenty of performers have busy weeks, but few have itineraries that are as all-over-the-map as Macy Rodman’s. Case in point: on Wednesday, the Brooklyn-based singer/producer performed at the glossy venue Elsewhere with disco revivalists Sateen, a gig for which she hit up the beauty supply store to buy fake lashes. Two days later, she was playing the 1:00 am slot at a sweaty 24-hour-show in an alternative clothing store. “It was across the street from the bar that I work at, so I was just drinking a lot, sweating off all my makeup and hanging out,” she says. The night after that, she held a live taping of her podcast NYMPHOWARS at the queer sex party NYC Inferno. The episode clocks in at a meandering hour, and features Rodman reviewing applicants to fist her co-host Theda Hammel for the first time. “There were people watching us the whole time, and just hanging out and doing poppers” she laughs.

At the core of all of these gigs, though, is Rodman’s confrontational and campy sensibility.  Growing up, she listened to alternative icons like Kathleen Hanna and Courtney Love, and would casually sing while her younger sister (a musical prodigy) played various instruments. She even made a joke album to go along with a comedic video series. Gradually, she became more comfortable playing live, which she credits to her weekly party Bath Salts, a “drag show for fuckups.” “I was always trying to find ways of getting around lip-syncing, because it made me feel silly,” she says. “I was like, “I’m not good at this, but I like being here and I like being on stage and stuff, so what else can I do? So I did mostly cover songs at Bath Salts.” One cover was a rendition of Nirvana’s “Rape Me” performed over the instrumental from Robin Thicke’s “Blurred Lines.”

That unlikely combination of alternative and pop music carries over to the songs she writes herself, which live in the nebulous world of post-club and experimental pop. Audiences expecting the glamorous figure seen on Macy’s Instagram will be taken aback by her chaotic sensibility. “I think sometimes people don’t expect me to be aggressive, or they don’t expect the punk element that is present in my music—or in my live performance” Rodman says. To wit: During one Bushwig performance of her jokey rap song “Lazy Girl,” she replaced the second verse with a wailing rendition of Evanescence’s “Bring Me To Life.”

The combination of melodramatic emo song with a rap about being lazy is pure camp—a reflection of queer aesthetic at the core of Macy’s live show. In his 1989 essay “Useful Laughter,” Scott Long defined “camp” as the violation of the “boundaries between the serious and the absurd.” Rodman doesn’t violate these boundaries so much as erase them; even a straight-ahead cover of Fleetwood Mac’s “Landslide” gets slathered in irony. “I think it’s always been necessary for me to have an element of humor, or a tongue-in-cheek aspect to what I do,” she says.

Even showgoers comfortable with alternative aesthetics can be taken aback by Rodman’s sensibilities. Her queer sense of humor can be confrontational, a trait she shares with her friend Jake Diebler, the front person of experimental techno band Bottoms. “We have a very similar sense of humor,” she says. “It’s not like I’m writing something with a punchline,” she says. Instead, she mocks the conventions of performing; she’ll stumble through a costume change onstage, make intentionally ugly faces and noises, or vamp like a child beauty pageant contestant during an aggressive song breakdown.

Her upcoming album Endless Kindness continues her efforts to combine disparate ideas. “I kept thinking of it as a collection of weird, little objects that work together because they don’t work together,” she says. Her obsession with chaos, the grotesque, and the humor found therein, is present throughout her work. Lead single—and Grindr anthem—“Greased Up Freak” is “a dance song that is horny like a dance song should be, but it’s also off-putting and kind of gross,” she says. In the video, Rodman plays a cast of female characters who write around and make come-hither motions. In one scene, Rodman is laying on the ground, covered in Vaseline, with a prosthetic pregnant belly bulging out of her two-piece swimsuit.

Underneath all the shock, awe, and Vaseline, Rodman is an artist whose work is about pushing the boundaries in order to make a space for herself: a self-described freak, a trans woman in America, a punk with an affinity for glamour and love of bathroom humor. By doing so, she’s also making space for others like her. “No matter what I want to look like, what I want to wear, what I want my videos to be like, I would like to be able to kind of have the work heal me in some way, or push me forward,” she says, “and I want it to be happy for the people that are listening to it.”