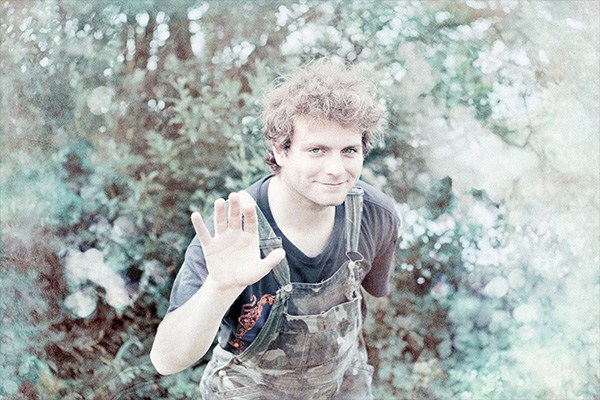 On the heels of his latest release, a sentimental mini-LP via Captured Tracks, the laid-back-yet-prolific indie rocker Mac DeMarco dishes on his recording process, instruments he doesn’t know how to play, and butts.

Bandcamp: Has your writing and recording process changed much since the Makeout Videotape days?

Mac DeMarco: It’s essentially the same. I still do everything by myself in my bedroom or space or whatever I have to work in. I have a lot more fancy recording toys now, and I’ve gotten a bit better at it than I was back then, but it’s all still just ye boi.

BC: Do you follow Alex Calder’s and Peter Sagar’s (Homeshake) respective projects? Any chance you guys would hit the road together?

MD: Yeah definitely, these guys are some of my oldest friends. I was molesting Alex in a karaoke bar in Montreal last night, actually. Both AC and Homeshake whip ass. I still play with these guys whenever I can. We’re actually taking Alex for a string of shows this fall, so yes, we hittin’ the road.

BC: Your album 2 includes an apology to your mom. How do your parents look at your career these days, now that it’s really taken off? Has your family been directly involved in any of your music?

MD: My mom is loving it. She’s always talking to kids on the Internet, getting fan mail. She’s a celebrity in her own right – ha! She’s always been really supportive, just sort of let me do whatever I wanted to do. Now that things are crazy, I think she’s hyped.

BC: Was there ever an intention to develop a public persona, or is it just a natural extension of your personality?

MD: Obviously in front of a camera or in an interview, some things inherently get put on, but I’ve never sat around trying to figure out how to act – ha! I’ve always tried to keep the real me and the performer me pretty similar.

BC: You frequently include covers from all sorts of artists (and the Robin Hood theme song, in at least one case) in your live sets. Do you have a favorite band to cover?

MD: We just always end up covering butt rock songs, the kind of songs that every young dude that learns to play guitar knows the riff to. I don’t think we’ve ever actually covered a song the whole way through. Maybe someday.

BC: Do you develop the concepts for your music videos, or is that a collaborative process?

MD: Usually my bass player and I will work on something, or we’ll just start shooting. We don’t really put a lot of thought into them.

BC: Was the inclusion of more keyboard on your last two records a conscious decision, or it just seemed right for the mood? Any other instruments you’d like to weave into future releases?

MD: I don’t know how to play keyboard very well, so I think that fact makes it interesting for me to play around with. If I have no idea what I’m doing on an instrument, sometimes I find it easier to be creative. I’ve been playing guitar for a long time, so I think trying out keyboard is just natural progression, or boredom – ha!

BC: Andrew Charles White, your new guitarist, seems to fit right in. How’d you guys meet?

MD: Andy plays in a band called Tonstartssbandht. We used to play with them every time we’d come through Montreal on tour with Makeout Videotape, so I’ve known him for a bunch of years. When Peter decided he didn’t want to tour with us anymore I was living with Andy, so he just joined up and started shredding.

BC: Has anybody taken you up on the coffee invite at the end of Another One?

BC: What’s the weirdest thing that happened to you last week?

MD: I kissed both of Donald Trump’s butt cheeks.

BC: Selling your old Vans shoes for the Willie Mae Rock Camp for Girls (and answering all the resulting eBay questions) was an awesome move. Any connection to that camp? Also, did you ever imagine them going for $21k? Imagine how much the Volvo could get!

MD:The kid who placed the final bid never paid up, so they actually didn’t sell at all. Vans, the shoe company, and I ended up being the ones who donated to Willie Mae. Either way, it’s good that the camp got some exposure and cashola out of it. They’re doing a cool thing.

BC: When’s your next vacation?

MD: I don’t go on vacation.