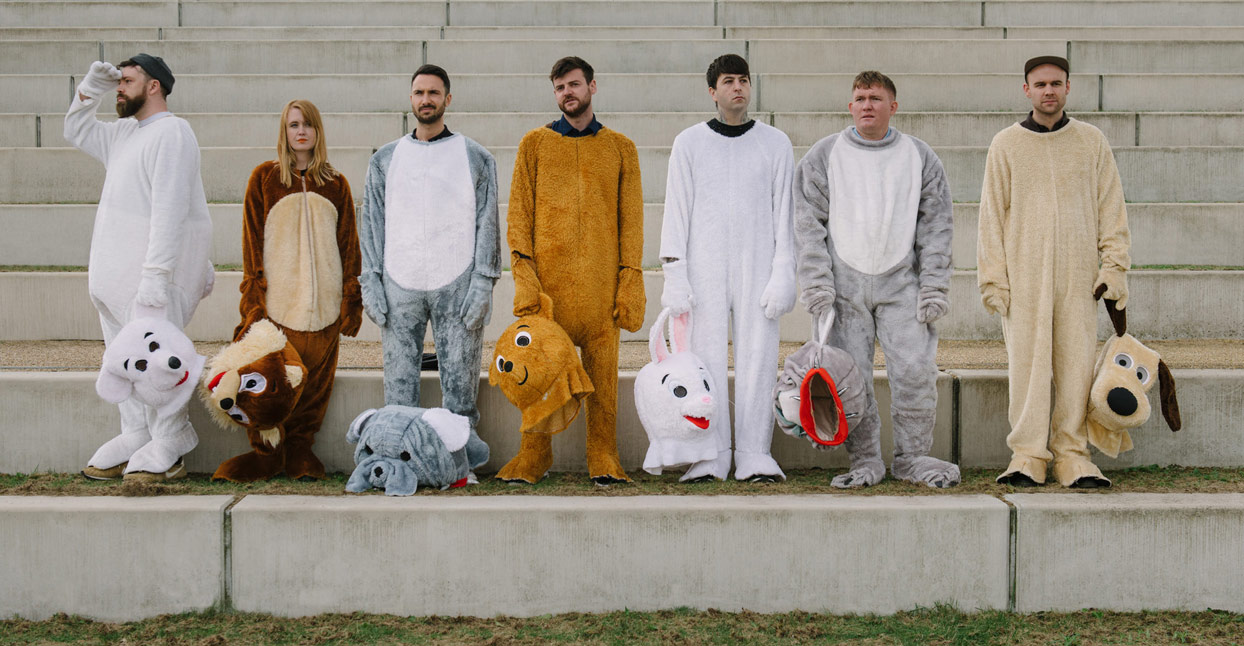 If a single moment is capable of defining a band, for Los Campesinos!, that moment occurs during a brief passage halfway through “I Broke Up In Amarante.” A fly-on-the-wall document of frontman Gareth Paisley’s mental health struggles during the recording of their new album, Sick Scenes, the track is rattling towards its heartening conclusion when Paisley’s voice suddenly drops away as he says, “Nah, you’re going to have to help me out here” and the gang-like vocals of the rest of band take up the mantle. It’s the aural equivalent of dragging someone through the final few meters of a marathon, a very human moment that encapsulates the spirit of togetherness that has seemingly pushed Los Campesinos! through hurdles that might have finished off other bands.

Sick Scenes, the band’s sixth album, is a weighty addition to the group’s catalog of fervent guitar-pop. Having left their label in the wake of previous LP, No Blues, the band took a step-back to try and define who they were and what they were doing. The result is a heartening and resolute record that really couldn’t have been made by anyone else.

We spoke to frontman Gareth Paisley about the backdrop to Sick Scenes; those aforementioned hurdles, the mental health struggles that informed it, and why they believe in themselves more than ever before.

Was there a back-to-school mentality when you came to writing Sick Scenes, given the fact that four years had passed since No Blues?

Yeah, the back-to-school analogy is probably appropriate for this record actually. Tom said it felt the most like writing a debut album since Hold On Now, Youngster, I think because we felt very frustrated off the back of No Blues. We’d left our label, left our management, and started doing everything ourselves. Our contract was up after that record but, from both sides, I think it was obvious that it wasn’t beneficial for us to be working together. So I think it did feel like a relief that Sick Scenes would belong to us and that we’d be able to do what we wanted with it.

Where did the initial spark come from?

Tom had been touring a lot as part of Perfume Genius’ band and, while he loves doing that, he eventually got a spark to start writing for himself again. That came after a period where we’d been asking ourselves if all of this was still worth doing. We knew we enjoyed it, but we weren’t sure if it was justified anymore, because we all had other commitments, and real jobs, but it quickly became apparent that we really did want to keep going.

We celebrated 10 years of the band at the start of 2016, and we sold enough commemorative football shirts to allow us to make this record. We thought we might sell a hundred and we ended up selling a thousand in just over a week. That gave us a pot of money to be able to work from.

So then you headed to Portugal?

We went during the Summer. We’ve always been very lucky to record abroad, and we wanted to do that again rather than patch something together over odd weekends. So we found this place in Portugal and the guys booked their holidays, and I quit my job, and all of a sudden we were ready to make a record.

Do you ever find yourself second-guessing the kind of album you should make, now that you’ve fine-tuned your sound, to some extent?

I don’t think we do, actually. There was a fear that we’d been away for too long and people might have become bored of the band, or just moved on, but we played shows that time, and I think people actually seem really excited for the new record, which is both flattering and a relief.

One of the questions I’m really bad at answering is ‘What can we expect from the new Los Campesinos album?’ because the answer, which I’m still trying to perfect in a way that doesn’t make it sound reductive, is that it sounds like a Los Campesinos! record, but hopefully one that’s a bit better than the one before. I think there are nuances and changes from one to the next, and I would really hope you can see our development and where we’ve improved. I really, really like Los Campesinos! and I don’t see any need to change it.

Location aside, did you approach the writing and recording in the same way as before? Are there certain moments you can pinpoint that led the record down a certain path?

I think the way that we write as a band is illogical—it’s not really in the spirit of Los Campesinos, and doesn’t really represent how we are in every other aspect. We consider ourselves to be a community, we’re all very close friends, and we try for there not to be a hierarchy in the band, but the song-writing is where that all goes out the window. So Tom writes everything. It used to be more collaborative, but it quickly became apparent that he’s the best at it. The production of the demos is unreal; under different circumstances we could just release them as finished songs. So he sends me those, and then I listen to them and enjoy them, but make no effort to write lyrics until we’re in the studio—and then I panic and pound my mental health into the ground and eventually come out with something.

One specific moment that jumps out now is when we were working on “The Fall Of Home.” I don’t think we’ve ever done a song as wilfully stripped-back and contemplative as that, and piecing it together felt like a new process for us—resisting the urge to pile up the drum machines and feedback on top of it all. It didn’t feel like working on a Los Camp song, it felt like something completely new to us.

Mental health shadows much of the work on Sick Scenes. Where do the roots of that lie in terms of its inspiration on your work?

I’ve always been pretty open about my own struggles—at least from Hello Sadness onwards. I think before that it tended to be, ‘I am sad, I don’t feel great,’ but on that record, it became much more explicit. This record was a weird one. We were in Portugal for 30 days to record the album, and the studio was lovely, but it was so remote. There was only one cafe in the village, and the house we were staying in didn’t have Wi-Fi and, while little things like that sound like very ‘millennial’ things to complain about, those things are a massive part of my self-care, and maintaining the well-being of my mental health. So that, coupled with the fact that it was so hot every day, made it all feel very claustrophobic.

There’s also a lot of pressure when you’re in the middle of making a record, and I ended up breaking down pretty badly—which is spelled out quite literally in the song “I Broke Down In Amarante.” So the record is a reflection of that. But, also, one of the main preoccupations of Sick Scenes is the fact that while I was struggling with mental health during my 20s, one of the few consolations I gave myself was that it would get better in time; that as I got older, I’d work things out. And then you get to the age of 31, and it’s actually a lot worse, because you were expecting to have everything figured out, and that’s not the case. I think this record is a documentation of that—the confused no-man’s land of growing older.

Does it help that your listeners seem to have grown alongside you? There seems to be a healthy ‘gang-mentality’ to Los Camp, fans included.

One of the great things about being in this band, and the decade that we’ve had, is that on each record we’re writing about experiences that a lot of our listenership has also been experiencing. I know a record like Hello Sadness, which is a pretty bleak break-up record, connected with a lot of people and I think Sick Scenes seems to be meeting a lot of people who are in that same confused atmosphere as me. Hopefully, that will be useful for people in some way, even if it’s just for something to listen to when they’re freaking out.

Your own foreword to Sick Scenes describes the record as a “release of pent-up aggression”—what was that a reference to something specific?

I’d like to say that I was referencing the broader political situation of the World, but when I wrote that it was more referring to our own situation. We still feel that we didn’t get to make the most of No Blues, because the label that we were with knew they were going to stop working with us. Also some people around the band, that we’d previously trusted and gone through a lot with, were encouraging us to break up, telling us that we’d done all that we could, and that we were on the wane. We never thought that was true, but obviously it’s a difficult thing to hear from people you’d trusted. Around that time, we played some shows, and the London show, at The Scala, was a very important gig for us. It’s the first time we’d ever done a double encore, which wasn’t planned for at all, and just seeing people’s reactions throughout that gig gave us a real sense of ‘No, fuck you!’ people do still want us to do this, and it is still worth doing. So to get into a studio and put some of those sentiments on to a record was a really empowering thing for us to do, and the result is this record, and I think it’s our most brash album for a while. We’re very aware of how fortunate we are to still be doing this, and releasing new albums.

Would you call it a new lease on life?

I would love to! However, I think that we know now that Los Campesinos! is always going to be a hobby for us, rather than a full-time endeavour—and that isn’t necessarily a bad thing. So I don’t think of Sick Scenes as a new lease of life, but I think it certainly stands as an affirmation of this life that we’ve been living.