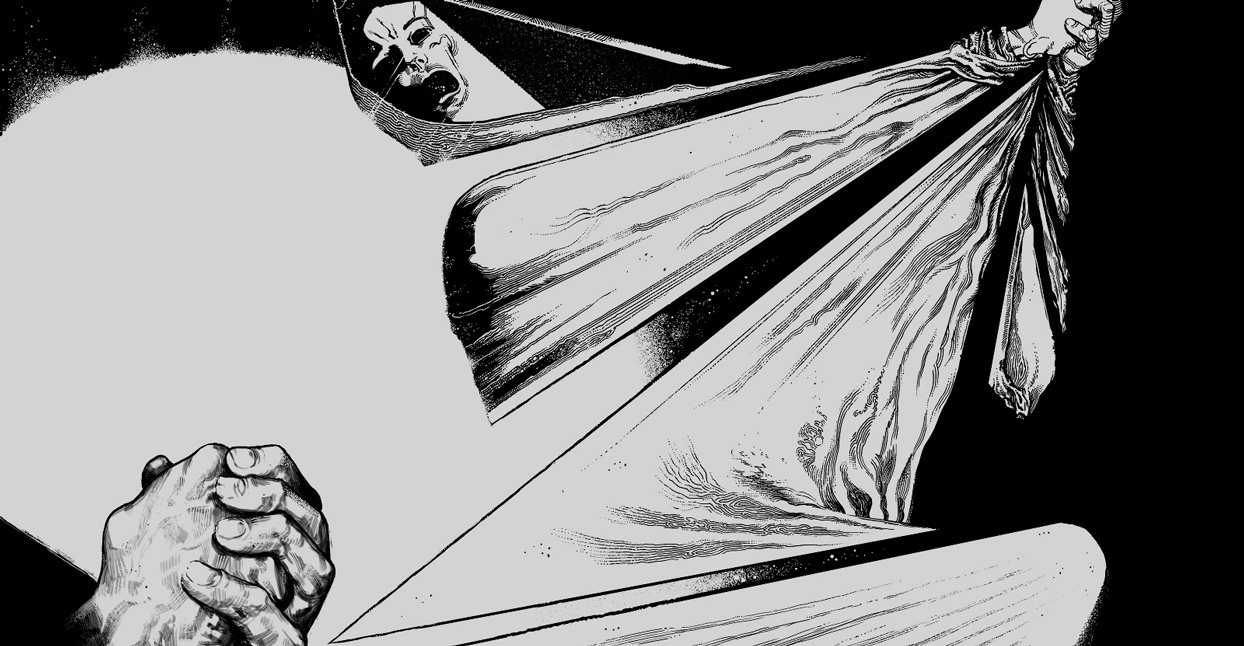 Few bands on the planet are currently taking as many risks or pushing as many boundaries as Locust Leaves. Their debut album, A Subtler Kind of Light, was 14 years in the making, and even a cursory listen makes it easy to see why: each of its four songs are spine-bending corkscrews of sound, moving from one hairpin turn to the next. The opening track alone seems to have about 12 discrete sections, even finding room for an eerie, almost operatic interlude. The result is a twisting, turning, shocking work of genius.

We sat down with Helm of Locust Leaves to discuss the heady subjects of constraints, metal history and status.

First off I want to talk about constraints, barriers, and self-imposed restrictions. All of these have been plaguing metal since its beginnings—black metal, in particular. Why do you think other artists get so hung up on their image?

I’d ask you, was heavy metal constraining itself from the beginning? Metal music reaches a point of self-awareness in the early ‘80s when the new wave bands begin to actively call themselves ‘heavy metal,’ instead of simply being branded by rock journalists as such. They begin to be proud of their movement, and to self-identify as metalhead musicians, making music for metalheads. A movement becomes a market fast, and then every band from 1984 onward seems to make it their mission to find a subgenre of metal to call their own. Venom invent ‘black metal.’ a host of bands start calling themselves ‘speed metal,’ and ‘power metal’ instead of good ol’ heavy metal, because they think that genre is oversaturated and old. Back in the mid ’80s, originators hated it when other bands would call themselves the same prefix-to-metal as them. Black metal wasn’t intended to be a genre, it was a niche that Venom thought they had carved out just for themselves.

By the end of the ‘80s, those niches had been cataloged thoroughly, and all signifiers that could point to the Outside were turned inwards. Heavy metal becomes its own alternate reality. We got Venom to shut up about how they were the only ones who played black metal, because we wanted to chart every ambiguous space totally, as any nerd subculture does. Doom metal wasn’t just what Trouble and Candlemass were doing. And so that’s the reason why your first question to an unknown heavy metal entity like Locust Leaves is one of category and hierarchy: ‘Where do you fit in?’ This is how heavy metal people talk to each other. If you’d like metal to be less beholden to limitations, then perhaps you shouldn’t let concerns of limitations govern how you discuss metal.

What part of metal history are you interested in communicating with? How does Locust Leaves relate to this history you’re talking about?

What we are interested in is a full understanding and communication with this history of metal, but not one fueled by servility. Instead, we want to pervert heavy metal itself towards a more critical path. Subverting tropes is not enough. Writing happy metal songs about flowers with saxophone solos on top is more self-defeating than making nuanced, personally-charged aesthetic choices in otherwise relatively recognizable metal arrangements. The former pushes a listener out with its farcical surface, the latter draws them in for something they thought they wanted, and then moves them with what it actually is about. If this sounds like a tall order, turn back to the ‘90s, which is full of examples of this. The path was there, metal just abandoned it to become, instead, the caretaker of its own tomb.

So, did black metal, in particular, suffer from its own hermeticism?

Black metal before 1993 in Norway was extremely multifaceted. No two bands sounded the same, yet they were all pursuing a narrow and singular ideology of misanthropy, elitism and alienation from the modern world. The canon was sealed with blood, murder, and arson, and it is exactly because of those events that when we discuss heavy metal music in terms of ideology and philosophy, we keep returning to it as the ‘only real thing.’ It should be possible to discuss heavy metal without constantly evoking the scary black metal smog, because heavy metal is still worthwhile without murder and arson. All those people who love National Socialist Black Metal are fetishizing an answer given in 1993 by Norwegian teenagers. We must do better than that.

What about the political, cultural and social ramifications of that history operating within our modern concept?

What is useful to remember about that particular scene is that it, too, wanted to have a relationship with the history of metal music while, at the same time, it wanted to revolt against it. It did the former, but it couldn’t achieve the latter: in its attempt at revolt, it fell prey to the underlying narratives of the societies that lay as a foundation underneath it. The black metal boy who thought of himself as a grand wizard, soaring through endless night skies, he who could imagine anything at all, instead found himself imaging old constellations of nationalism, racism, sexism, and chauvinism.

It is exactly because metal music turns all signifiers inwards that the Grand Wizard thought he had come up with those concerns completely on his own with no influence from the modern world—as if they were ‘natural and ancient and pure.’ We were naive in 1993, but we don’t have to be naive anymore. We can still pursue being grand wizards, but we have to recognize there is an outside world as well and, in it, a ‘Grand Wizard’ is a high-ranking member of the Ku Klux Klan.

I’d like to ask about statements. Your album, a debut, makes quite a statement, particularly with reference to what I was asking you in the first question. Is there any attempt to make a statement with your music? What place is this coming from?

There is a statement we’re trying to make, otherwise why would we even put out a record? It’s all quite complicated, and we’re not really here to make anyone’s life any easier, but as an encouraging point of entry: First, at some point in life, we all have to be held accountable for what we do. Second, no matter how much the world cuts away at you, something is left. Something has to be left. This record is what we in Greece call a ‘tama’—a shiny bauble, a symbolic offering to God above for a hope to be fulfilled. But in our case, the meaning is inverted.

The core plot of the record is that there’s a figure that desires her transformation, and to achieve it, she has to fight the world. Pretty basic heavy metal stuff, right? The ambition of the figure that propels her is the first song. The world is symbolized in this scheme by an insurmountable pillar on which all the names of the people in the world are carved. My name is there. Your name is there also, Zachary.  We are all participating in the injustices that befall this figure. Her impossible ascent is the second song. At the top of this pillar, this figure meets and has a mostly one-sided conversation with God. That’s the third song. The fourth is what’s left. There is always something left.

Locust Leaves has been privately making music for 17 years, now. The emotional returns from making this kind of music are their own reward. We’ve only stepped out to the world and are having this conversation with you now because we hope we have something useful to say to others. Once we have nothing left worth saying, we’ll get back to considering our band a private vanity project. This sounds very dramatic, but it has happened to us once already. On the split release with Spectral Lore, five years ago there is the song ‘Promise’ that, at the time, we considered to be our only ecumenical statement and, after which, we disbanded. But then, there’s always something left.

Where do you see Locust Leaves in the metal scene, and how do you see the interplay between the two?

We consider our band to be a heavy metal band. Every aesthetic decision that we have made in our record was informed not by what heavy metal is, but what we could imagine it to be. We do not think the record is that ‘out there,’ avant garde, experimental or weird. It is just self-analytical, personal and open to its own failures. For us, this is how every heavy metal record should be: nothing like ours, yet still aware of its form-as-such.

What allows us to make these unreasonable—and, some would say, pretentious—demands of metal is the romantic spirit of heavy metal itself. We didn’t fall in love with Fates Warning when we were 13 years old so we could be scholastic book-keepers of an established theology to an already-dead God. We fell in love with it to be heretics of the same faith.

Heavy metal music doesn’t just ‘allow’ for this, it revels in it. You spin a good record, and for 40 minutes, parents and school teachers and all figures of authority are banished in the Negative Zone. You are your own God and master. This chaos core of metal mutates the listener, it helps them see what it is they desire to be. We understand why, through this ordeal, some are left mutants unfit for the normal world, and we often call them friends. But we do not understand it when the end result is just boring old white straight racist dullards going on and on about their vinyl collection.

Finally, I just want to talk about themes a bit. You’ve got four distinct segments on the record, separated into four discrete tracks. I’m wondering what’s going on there.

What I can say is that the lyrics to our record are not an afterthought, as they are with many heavy metal records. If the listener puts in some effort to connect symbols and references, they will reveal the details of the story that I’ve outlined in my answer above. The ramifications of it might be useful as tools of self-discovery for some, or inspiring for others to keep on. That’s all there is to it.

There is only one phrase in our native Greek language on the record. The rest is all in English. It’s difficult to translate what it means, yet it is key. Sometimes that’s how it has to be. Doing a bit of research isn’t a bad thing.